Victoria has recorded 394 new coronavirus cases and 17 deaths overnight - the highest number of people to die in a single day in Australia since the pandemic began. 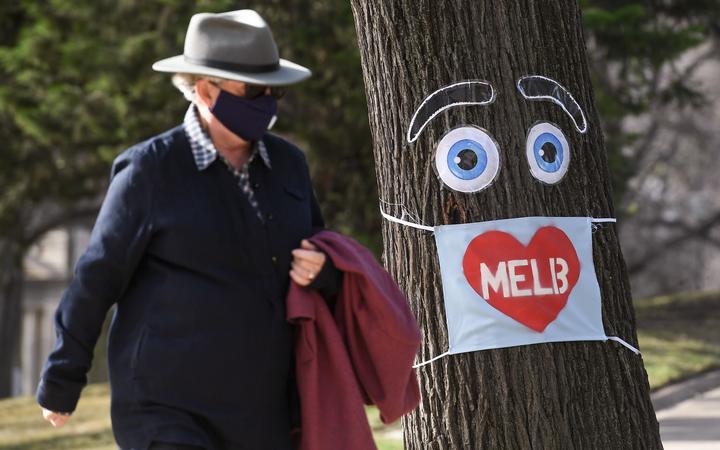 A man walks past a large face mask pinned to a tree in Melbourne on 3 August 2020 after the state announced new restrictions. Photo: AFP

Premier Daniel Andrews said 10 of the deaths were connected to aged care outbreaks.

The state government has announced an extra $59.7 million will be allocated towards Victoria's mental health services.

The funding includes $250,000 for an existing counselling service that is used by healthcare workers, including nurses and midwives.

"This is a very challenging set of circumstances - particularly those nurses and personal care workers who have gone into aged care settings in fundamental crisis," Andrews said.

"You can't unsee what you've seen. There is a degree of trauma, a degree of previously unknown levels of really, really challenging circumstances." 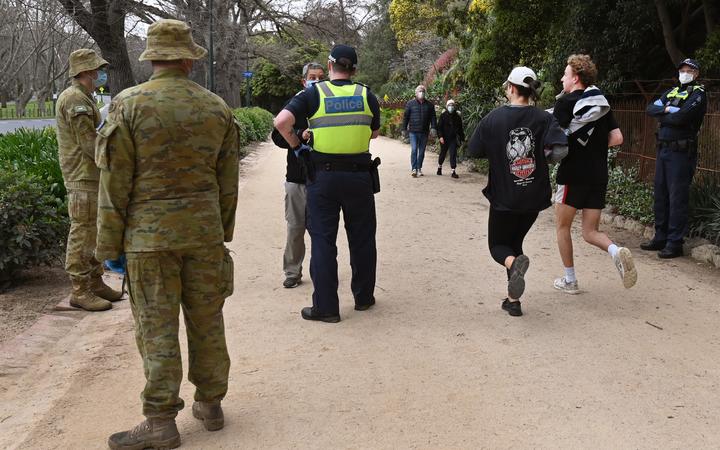 Police and soldiers patrol a running track while people exercise in Melbourne on 7 August 2020. Photo: AFP

"Emergency departments are busy at the best of times, particularly now in the height of a pandemic," he said.

"We want to make sure that we keep those people who need support for mental illness with the support that they need in the community."

Andrews said people failing to follow the rules had contributed to rising case numbers in the state.

"I do not want a situation where the bad behaviour, the poor choices of a smaller number of people in any way detract from, I think, a growing number of Victorians who are doing the right thing."

The premier said the state was still seeing a reproduction rate of about one or just under.

"We have to drive that [down] so that every second, or third or fourth person who has it is infecting someone else, and that's where we'll see the numbers halve and halve again and become more manageable," he said.