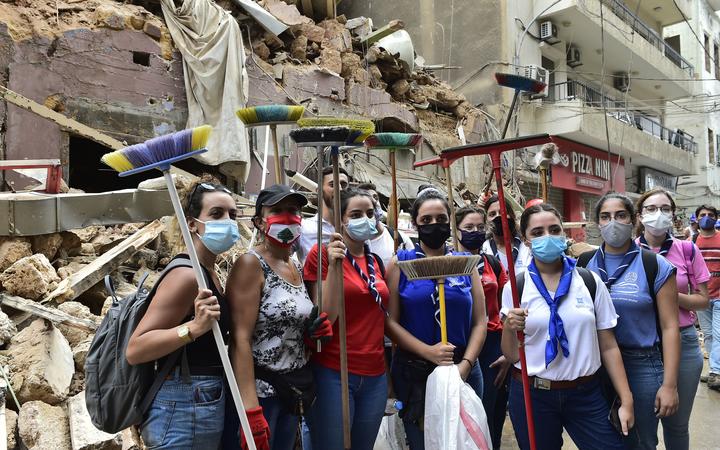 A group on their way to help to clean up debris after a fire at a warehouse with explosives at the Port of Beirut led to massive blasts in in the city. Photo: AFP

The World Food Programme said the damage to Beirut's port would interrupt food supplies and push prices up.

The World Health Organisation said the health system was seriously damaged, with three hospitals out of action.

Meanwhile, Lebanese President Michel Aoun rejected calls for an international investigation into the explosion, and said local authorities would examine whether it was triggered by "external interference" such as a bomb.

The leader of the militant Hezbollah movement, Hassan Nasrallah, also denied allegations that it had stored weapons or ammunition at the port.

The government has said the blast was the result of the detonation of 2750 tonnes of ammonium nitrate that had been stored unsafely at the port for six years.

The decision to keep so much explosive material in a warehouse near the city centre has been met with disbelief and fury by many Lebanese, who have long accused the political elite of corruption, neglect and mismanagement. 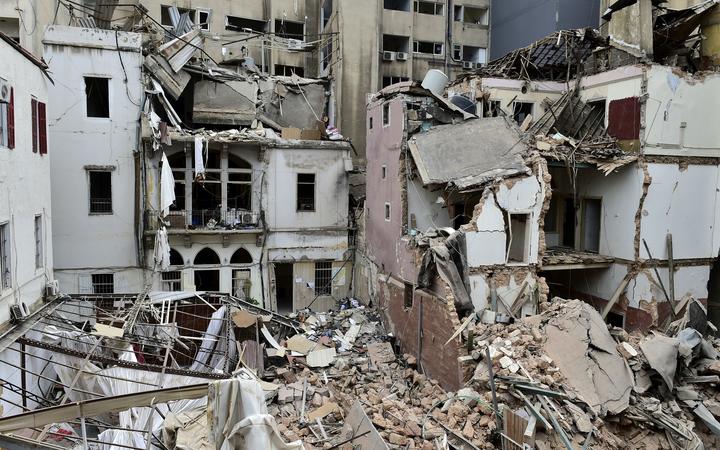 One of many housing areas wrecked by the port disaster that has left an estimated 300,000 people homeless. Photo: AFP

Before the explosion, 75 percent of Lebanese were in need of aid, 33 percent had lost their jobs, and one million people were living below the poverty line.

World Food Programme spokeswoman Elisabeth Byrs told reporters in Geneva that the organisation was concerned the severe damage to Beirut's port - the largest in the country - could limit the flow of food supplies and push prices beyond the reach of many.

The WFP was sending 5000 food parcels that would be enough to feed a family of five for a month, and was planning to import wheat flour and grains, she said. 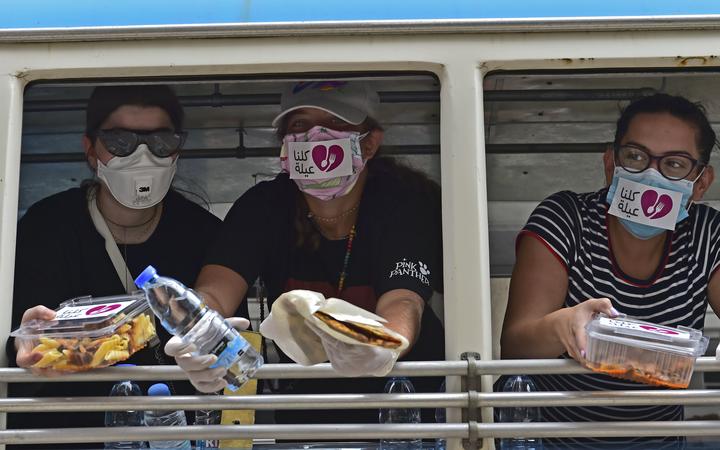 Volunteers provide water and food for people who help to clean up after the warehouse explosion. Photo: AFP

Christian Lindmeier of the WHO meanwhile warned that Lebanon's hospitals were overwhelmed with the patients, some were damaged and some non-functional, and that 500 beds had been lost.

The WHO has delivered emergency trauma and surgical supply kits containing essential medicines and medical supplies, and is calling for $US15 million ($NZ22m) to cover immediate needs and ensure continuity in the response to the Covid-19 pandemic.

Lebanon was also seeing a rise in cases of the coronavirus disease but 17 containers of masks, gowns and gloves, shipped to Beirut by the WHO, had been destroyed, Lindmeier said.

The UN Refugee Agency, which normally supports Lebanon's 1.5 million Syrian refugees, said it was releasing emergency shelter materials to all those in need.

Many countries have offered aid to help Lebanon, with the US announcing on Friday that it planned to immediately send $15m worth of food and medicine.

Lebanon's president and prime minister have said the ammonium nitrate - which is commonly used as a fertiliser but can also be made into an explosive - had been stored in a warehouse at the port without any safety precautions since 2014, when it was unloaded from an impounded cargo ship.

On Thursday, Aoun promised a transparent investigation by Lebanese authorities and to "hold those responsible and those who were negligent accountable, and serve them the most severe punishment".

However, calls for international investigation have grown since then.

The president ruled out such a move yesterday, saying: "The goal behind calls for an international investigation into the port issue is to dilute the truth."

He also said the government-backed inquiry was looking into three possibilities: negligence, accident or what he called "external interference through a rocket or bomb or other act". 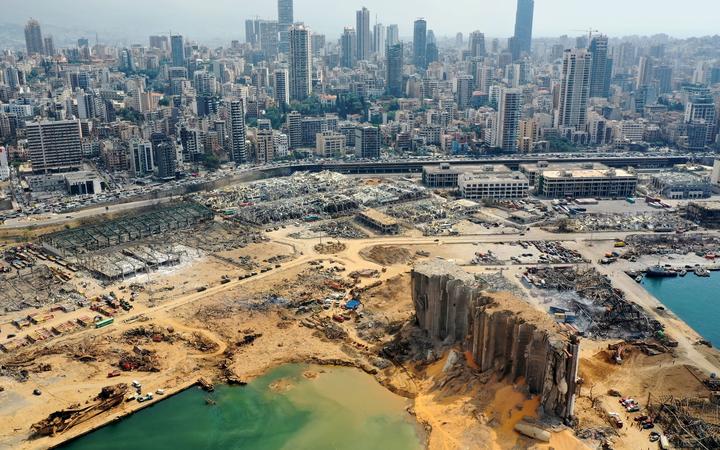 An aerial view of the port after the explosion. Photo: AFP

Officials have said the explosion appears to have been triggered by a fire and there has been no evidence so far of the third possibility mentioned by Aoun.

Hezbollah leader Hassan Nasrallah, Aoun's political ally, meanwhile denied any responsibility for the blast, insisting that his group did not control the port and that it had stored no weapons or ammunition there.

BBC Middle East analyst Sebastian Usher says Nasrallah's denial is necessary because many Lebanese believe the exact opposite - he needs to shore up his position and that of his movement, which still wields decisive power in Lebanon.