A huge explosion in port warehouses near central Beirut has killed more than 70 people and injured over 3000 in the Lebanese capital. 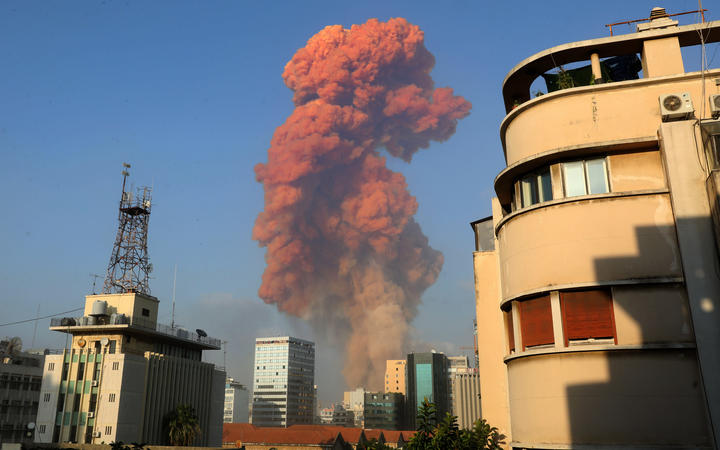 Lebanese Prime Minister Hassan Diab said an estimated 2750 tons of ammonium nitrate had been stored at a warehouse for six years.

It is an ingredient in fertiliser - and some bombs.

The chemical has been behind several explosions in the past, both accidental and deliberate.

It was used in a terror attack in 1995 in Oklahoma City - the worst domestic terrorism on US soil. An extremist, Tim McVeigh, created a bomb of ammonium nitrate, diesel fuel, and other chemicals.

The bomb exploded outside a federal building, causing several floors to pancake, and killing 168 people with hundreds more injured.

Ammonium nitrate was also behind a massive deadly blast in Tianjin, China in 2015. It left 173 people dead and caused $US 1 billion in damage to the port city.

An investigation found that stocks of flammable nitrocellulose - a chemical used in nail polish - had caught fire and spread to illegal stores of ammonium nitrate.

China jailed or fined close to 50 people for failing to store the nitrate properly.

Diab said there would be accountability for the deadly blast at the "dangerous warehouse", adding "those responsible will pay the price".

The US embassy in Beirut warned residents in the city about reports of toxic gases released by the blast, urging people to stay indoors and wear masks if available.

Lebanon's security chief Abbas Ibrahim has also said that "highly explosive material" that had been confiscated years ago was being stored.

The blast appears to have had at least two explosions. The first smaller one ignited a fire but was big enough to catch the attention of hundreds of Beirut residents who captured it on their cellphones.

The second was much larger and caused a shockwave and a sonic boom to spread out across the area, blowing out the glass from windows and wrecking buildings and overturning cars.

No one is able to say yet what caused the ammonium nitrate to ignite. But some experts have been analysing the different stages of the explosion caught on multiple videos.

Brian Castner, a weapons expert for Amnesty International, tweeted that the mushroom effect of the shockwave could be clearly seen.

"The white shockwave of the secondary explosion is visible in the humid air. But beyond saying that, any other analysis at this point is just speculation."

Best video I've seen of the twin explosions in Beirut. The white shockwave of the secondary explosion is visible in the humid air. But beyond saying that, any other analysis at this point is just speculation. https://t.co/nO7sd4851I

A retired nuclear scientist, Cheryl Rofer, tweeted her chemical analysis of the blast. She said:

"The smooth spherical cloud is water condensation in the shock wave. Common to all big explosions under the right atmospheric conditions."

The smooth spherical cloud is water condensation in the shock wave. Common to all big explosions under the right atmospheric conditions.

I knew someone would go that (erroneous) route.