The Hong Kong government has postponed September's parliamentary elections by a year, saying it is necessary amid a rise in coronavirus infections. 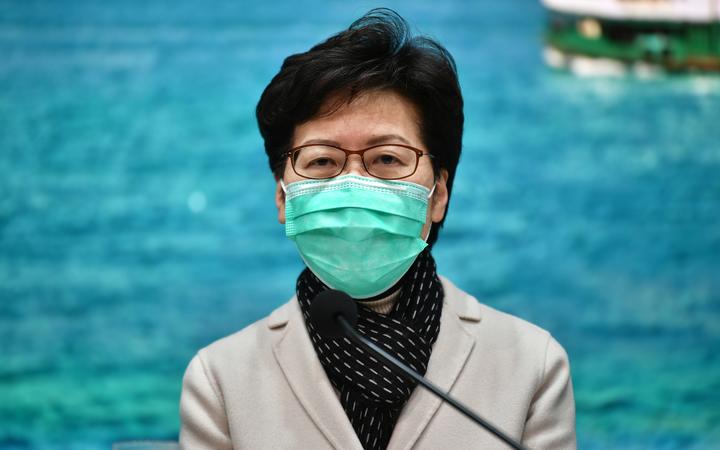 Carrie Lam said there were no political motives behind her move - but opposition activists disagree. Photo: AFP

Hong Kong is currently experiencing a spike in Covid-19 infections, and reported 121 new cases on Friday.

However, the opposition has accused the government of using the pandemic as a pretext to stop people from voting.

On Thursday, the government banned 12 pro-democracy candidates from running in the elections.

Opposition activists had hoped to obtain a majority in the Legislative Council (LegCo) in September's poll, capitalising on anger at Beijing's imposition of a controversial national security law in Hong Kong, and fears that the territory's freedoms are being eroded.

Hong Kong, a former British colony, was handed back to China in 1997 under an agreement meant to guarantee a high degree of autonomy for 50 years.

Pro-democracy candidates had made unprecedented gains in last year's district council elections, winning 17 out of 18 councils.

On Friday, Chief Executive Carrie Lam said she would invoke emergency powers to postpone the elections, calling it the "most difficult decision I've made over the past seven months".

"This postponement is entirely made based on public safety reasons, there were no political considerations," she said.

Reported to be among them are high-profile activist Nathan Law, who has fled to the UK, and Simon Cheng, a former employee of the UK's Hong Kong consulate who alleges he was tortured in China and was recently granted political asylum in Britain.

Cheng told the BBC that an arrest warrant would not stop him speaking out about issues in Hong Kong. "The totalitarian regime now criminalises me, and I would take that not as a shame but an honour," he said.

How bad is the pandemic in Hong Kong?

The overall numbers are still lower than those of many other places - but the spike comes after Hong Kong appeared to have contained the outbreak, with weeks of few or no local infections.

Now, it's experiencing what's been described as a "third wave" of infections, and Lam says she fears Hong Kong's hospitals will be overwhelmed by new cases.

Health experts have told the BBC that, with the reintroduction of social distancing measures, the rate of infection appears to have slowed, and they hope Hong Kong will be back to close to zero local infections within four to six weeks.

The city has introduced tough new measures to combat the virus, banning gatherings of more than two people.

What's the argument for postponing elections?

The territory has had more than 3,200 confirmed infections, and 27 deaths, from the virus.

Lam said Hong Kong's pandemic was in "its worst situation since January" and "as community spread continues, the risk of a large-scale outbreak will increase".

She said that with 4.4m registered voters in Hong Kong, the elections would involve "a large-scale gathering and an immense infection risk", while social distancing measures would prevent candidates from canvassing.

She also said that proceeding with elections in September would pose a particular risk to elderly voters, and that Hong Kong had many registered voters in mainland China, and overseas, who would be unable to take part in the elections while border quarantine measures were in place.

The Chinese government said it supported the decision, which was made "in the interests of the public".

What's the argument against delaying the polls?

Opposition politicians say that, under local election laws, the polls can only be postponed by 14 days, and that a longer delay would "trigger a constitutional crisis in the city".

Lawmaker Tanya Chan said she suspected pro-government politicians were more concerned about "their own election prospects" rather than "the severity of the pandemic".

Some experts have suggested that measures could be put into place to make elections safer, such as reducing waiting times at polling stations - and that a delay of a whole year is not necessary.

Activist Joshua Wong, who was disqualified from running in the elections, wrote on Twitter that the pandemic was being used as "as an excuse to postpone the election" and was "the largest election fraud in #HK's history."

Hundreds of thousands of people took part in unofficial pro-democracy primaries earlier this month, in what was seen as an a show of support for the pro-democracy movement.

In Washington, the White House condemned the delay, saying it undermined democracy. It came a day after President Trump suggested the US election in November could be delayed even though he has no power to do so.

How have other governments handled elections?

At least 68 countries or territories postponed elections due to Covid-19, while 49 places held elections as planned, says the International Institute for Democracy and Electoral Assistance.

In announcing her decision, Lam argued that many governments had also postponed elections by a year, including London's Mayoral elections, and local government elections in Australia's New South Wales.

Her comparison was queried by journalists, who said the outbreak in Hong Kong was not as severe. London has had a total of about 35,000 confirmed Covid-19 cases, compared to Hong Kong's 3,200.

Meanwhile, in Australia, by-elections in Victoria went ahead as scheduled in March, as did a federal by-election in New South Wales.

Singapore held its general election earlier this month with safety measures in place - and had its highest turnout in recent years.

The vote demonstrated "that it is possible to protect public health even as people go about exercising their democratic right to vote", said Eugene Tan, a law professor and political commentator at Singapore Management University.

How does the Legislative Council work?

The Legislative Council - or LegCo - helps to make and amend Hong Kong's laws.

It is made up of 70 seats - but only 35 of these seats are directly voted for by the public.

Another 30 seats represent "functional constituencies" - these are voted for by smaller groups representing special interests, primarily businesses, banking and trade. Historically these sectors have been largely pro-Beijing.

The last five seats are made up of district councillors who are elected by the public to sit on LegCo.

This system, where only a proportion of LegCo councillors are chosen by the public, has been called undemocratic by critics but supporters of the system say it helps avoid populism and protects Hong Kong's business interests.