As the global death toll from the new coronavirus reaches 650,000, the World Health Organisation said countries had to do more to halt the spread inside their borders. 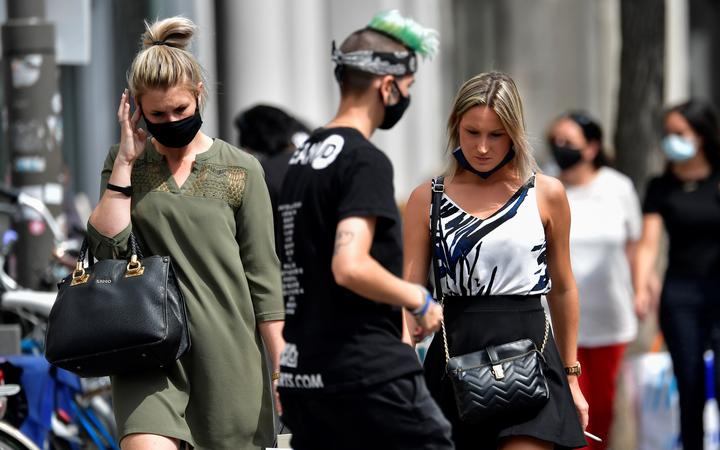 People wear protective face masks as they walk in the city centre of Antwerp, Belgium, on 27 July. Belgium has tightened restrictions because of a spike in Covid-19 infections. Photo: AFP

The world is facing the prospect of second virus wave with surges reported in a number of countries previously singled out as places where the virus was under control.

Vietnam locked down the city of Danang and forced tens of thousands of visitors to relocate, mainland China confirmed the most new locally-transmitted cases since early March and Papua New Guinea's capital was going into lockdown. Hong Kong banned gatherings of more than two people, closed down restaurant dining and introduced mandatory face masks in public places.

The World Health Organisation said travel restrictions could not be the answer for the long term and countries had to do more to stem the spread inside their borders by adopting proven strategies such as physical distancing and the wearing of masks.

"It is going to be almost impossible for individual countries to keep their borders shut for the foreseeable future. Economies have to open up, people have to work, trade has to resume," WHO emergencies programme director Mike Ryan said.

"What is clear is pressure on the virus pushes the numbers down. Release that pressure and cases creep back up."

Ryan praised Japan and Australia for having had "good success in containing the disease" but said that it was to be expected that the virus would resurge in areas with active transmission if restrictions are lifted and mobility increased.

"And that is what has essentially occurred in many countries is that in nightclubs, other situations, dormitories, other environments in which people are close together can act as amplification points for the disease and then it can spread back into the community. We need to be hyper-alert on those."

More than 16.3 million people have been reported to be infected by Covid-19 globally and more than 650,000 have died according to Johns Hopkins University figures.

Announcing the infection on Monday, the White House said in a statement there was no risk of exposure to Trump or Vice President Mike Pence.

The White House statement said that O'Brien's symptoms were mild, that he was self-isolating and that he was working from a secure location off site. It said the work of the National Security Council would continue uninterrupted.

The announcement caught some White House staff off guard, as there had not been an internal memo about it, one source said. Because of the regular testing regimen, White House officials do not reliably wear masks while working in the West Wing.

A US military member who works as a presidential valet at the White House tested positive for coronavirus in May as did Pence's press secretary.

Belgium is tightening restrictions - but avoiding another lockdown - because of a worrying rise in Covid-19 cases.

From Wednesday, Belgians will be allowed to see a maximum of five people outside of their families. Currently a Belgian individual can meet 15 people in a "social bubble".

The rise in cases has been especially sharp in the city of Antwerp.

In the past week an average of 279 people daily have caught coronavirus in Belgium, compared with 163 a day the week before. The current death toll officially is 9,821.

Spain races to save tourism as cases surge

Spain is fighting to save its embattled tourism industry after the UK government imposed a 14-day quarantine on all arrivals from the country.

Spanish Prime Minister Pedro Sanchez said the decision was unfair, adding that the Spanish government was in touch with the British government to try and make it change its mind.

Sanchez said the "error" was for London to have considered the rate of coronavirus infection in Spain as a whole, when most regions had a lower rate than Britain's.

The UK said it had no plans to change its decision, and extended its travel advice, telling nationals to avoid non-essential journeys to all of Spain.

Local authorities have issued stay-at-home orders for some four million residents in Catalonia, including in the regional capital Barcelona.

In some patients, the heart may be "in serious trouble as a part of Covid-19 disease," Dr. Valentina Puntmann of University Hospital Frankfurt told Reuters.

Among 100 patients ages 45 to 53, "a considerable majority" - 78 - had inflammation in the heart muscle and lining. Sixty-seven had recovered at home while 33 had required hospitalisation.

Thirty-six patients reported ongoing shortness of breath and general exhaustion, and 71 had blood markers of heart muscle damage. Compared with similar people who had not had Covid-19, the recently recovered patients' hearts pumped more weakly and displayed other risk factors for heart failure.

Puntmann suspects the abnormalities are signs of permanent problems. "While we do not have direct evidence for late consequences yet, such as the development of heart failure ... it is quite possible that in a few years, this burden will be enormous based on what we have learned from other viral conditions that similarly affect the heart," she said.