The parent company of the Australian theme park Dreamworld has been charged over the deaths of four people in 2016. 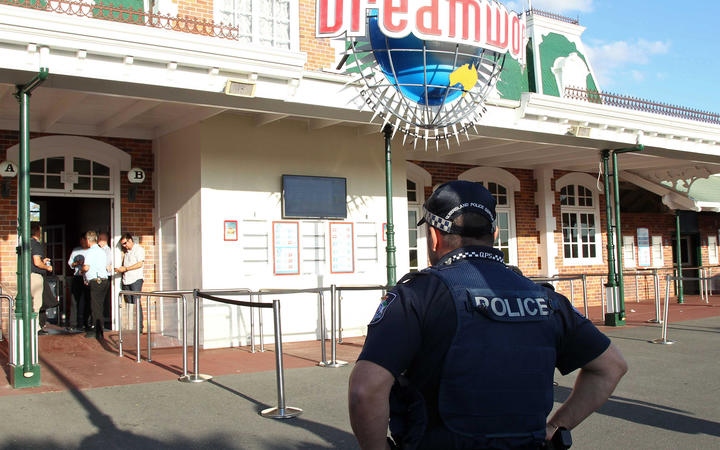 A police officer stands in front of the Dreamworld theme park on Gold Coast on 25 October, 2016, after four people were killed when a park ride malfunctioned. Photo: AFP

New Zealander Cindy Low was among those killed by a malfunction on the Thunder River Rapids Ride that caused two rafts to collide at the Gold Coast theme park.

In a statement to the Australian stock exchange, Ardent Leisure said three charges had been filed against the company in the Brisbane Magistrates Court under the Work Health and Safety Act.

Five months ago, a coroner found there had been no engineering assessment on the ride in 30 years.

The inquest findings of a series of failures at the park, including safety and maintenance systems that the Coroner described as "rudimentary at best" and "frighteningly unsophisticated".

Kate Goodchild, her brother Luke Dorsett and his partner Roozbeh 'Roozi' Araghi were killed alongside 42-year-old Cindy Low when the ride malfunctioned about 2.30pm on Tuesday, 25 October 2016.

Ardent said it would update the market when the matter had been finally determined.

"First and foremost, we again express our deepest sympathies to the families and friends of Roozbeh Araghi, Luke Dorsett, Kate Goodchild and Cindy Low for their loss and ongoing suffering and say sorry to all of the people impacted by this tragedy," the statement said.

"There has been considerable change at Dreamworld over the last few years as was acknowledged by the coroner in his report.

"Dreamworld has taken substantive and proactive steps to improve safety across the entire park and continues to enhance existing systems and practices, as well as adopt new ones, as we develop and implement our safety case in accordance with the Queensland Government's new major amusement park safety regulations.

"The new leadership team is committed to continuing to improve and enhance safety systems and practices with the aim of becoming a global industry leader in theme park safety and operations."