Victorian Premier Daniel Andrews has announced a lockdown of metropolitan Melbourne as the state records its largest daily increase in Covid-19 cases since the start of the pandemic. 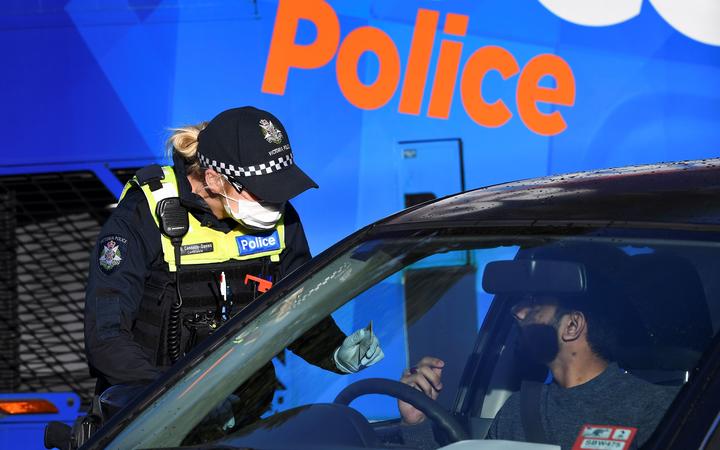 Police are out on the roads in melbourne as the city prepares for a more extensive lockdown. Photo: AFP

Stay-at-home orders have been reintroduced for both Melbourne and the shire of Mitchell - placing those areas back into Stage 3 restrictions from midnight tomorrow.

The state reported 191 new cases of Covid-19 today, with 37 linked to known outbreaks and the remaining 154 still under investigation.

Andrews announced the stay-at-home orders would be reimposed from midnight tomorrow night.

Andrews said the new restrictions were the result of the "unacceptably" high number of new cases.

"It is simply impossible, with case rates at these levels, to have enough contract tracing staff to have enough physical resources … in order to suppress and contain this virus without taking significant steps," he said.

Andrews said people acting as if the pandemic was over was "not the answer, it is part of the problem".

He said the virus had emerged from postcodes already under the stay-at-home orders to other parts of Melbourne.

"We know we are on the cusp of something very, very bad if we don't take these steps today," he said.

Chief Health Officer Brett Sutton said there was a "unanimous view" on the need to impose the new restrictions.

"This is required to avoid absolutely catastrophic outcomes, indeed thousands of cases per day," he said.

"I know that we will already see deaths from the cases that we have occurring every day. What I do not want to see is any more deaths than are already predicted."

Professor Sutton said there were currently about 5000 close contacts of the state's active cases.

Andrews said the virus will "kill thousands of people if it gets completely away from us".

"That will be more than inconvenient. It will be tragic," he said.

Under the stage three restrictions, people are only allowed to leave their homes for work or study, shopping for supplies and medical care and caregiving.

Andrews said he spoke to Prime Minister Scott Morrison earlier today and asked for a further 260 Australian Defence Force personnel to help with on the ground support alongside Victoria police.

He warned police would be out on the roads making sure people were not travelling for the wrong reason. 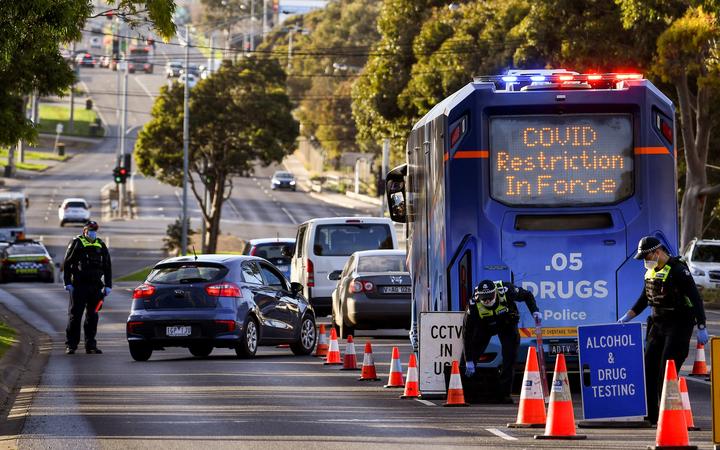 Police pull vehicles aside at a checkpoint in the locked-down suburb of Broadmeadows in Melbourne. Photo: AFP

Meanwhile, the NSW-Victoria border is closing at midnight, and about 1000 police officers and soldiers from NSW were making their way towards the state line to help close crossings.

NSW Police Commissioner Mick Fuller conceded the first 72 hours of the closure would need to be flexible, because specific details about who could get an exemption to travel due to "extraordinary circumstances", and exactly how border communities would operate, had not been revealed.

NSW Police Minister David Elliott said Victoria should do the "decent thing" and help pay for the cost of closing the border between the two states.

Elliott said it was a costly exercise and Andrews should foot part of the bill.

"I would think that would be the decent thing to do, given this is an outbreak that's caused by a situation in Melbourne," he said.

"But we can't rely on other governments to do the right thing all the time.

"So as far as the New South Wales government is concerned, we'll be providing the financial support that's necessary."