The Australian state of Victoria has recorded another 74 coronavirus cases overnight as Premier Daniel Andrews announced the state's more than 3000 public housing tenants placed under hard lockdown will not have to pay rent for two weeks. 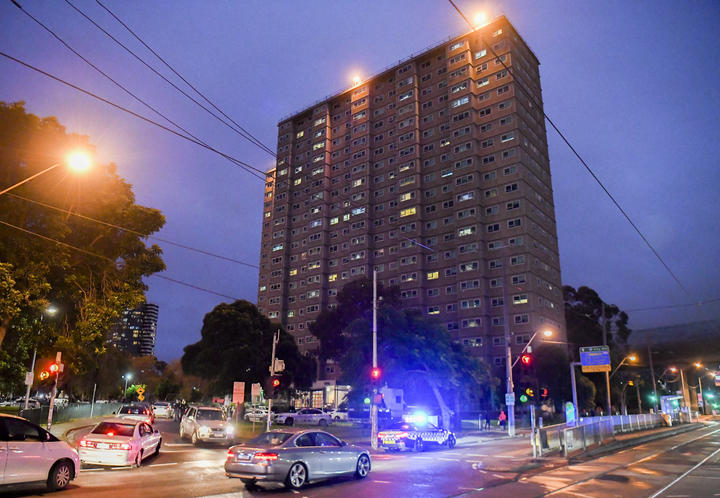 One of the Melbourne public housing estates locked down to stop the spread of Covid-19. Photo: AFP

Andrews also announced a range of financial support for all tenants in the nine buildings, which were placed under immediate lockdown on Saturday afternoon.

"Those who are employed and because of the hard lockdown cannot go to work, they will receive a $1500 hardship payment," he said.

"For those households where there is no-one in employment, they will receive a $750 hardship payment."

Andrews said public health teams would begin going door-to-door to test every person, and he was confident all residents would be willing to comply.

He said work had been going on throughout the night to organise food, medical support, drug and alcohol support, family violence support and other essential services.

The nine public housing towers in Flemington and North Melbourne were locked down on Saturday after at least 23 coronavirus cases were identified across more than 12 households. 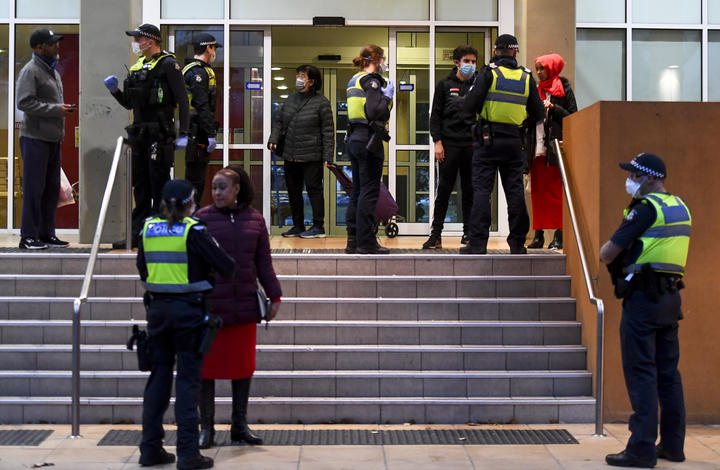 Police speak to residents of one of the nine public housing estates locked down in Melbourne. Photo: AFP

Health authorities said the drastic move was necessary because of the nature of the buildings, where many people live in close quarters and use shared facilities including lifts and laundries.

While other residents under lockdown in Melbourne are allowed to leave their home for four reasons - work or education, exercise, medical care or caregiving or shopping for supplies - the residents of the towers will not be able to leave their apartment for any reason.

Andrews said the approach was similar to that taken to protect residents after a confirmed coronavirus case in aged care facilities.

"Staying in your flat is absolutely essential," Andrews said.

"If we have a large group of people who've already got pre-existing and underlying health challenges infected with this virus, then people will die. It is as simple as that."

Premier pledges to meet the needs of 'each and every' resident

Residents told the ABC this morning that they were yet to receive any information or food supplies.

Many only learned of the lockdown from the media or when they tried to enter or exit their building and were stopped by police.

Andrews said support would be provided in a culturally and linguistically appropriate way.

"We will meet all the needs of each and every one of those residents. Are all of those needs absolutely crystal clear right now? No, I think they'll evolve over time," he said.

"We'll continue to listen to those residents and hear from them firsthand about what they need and then seek to meet those needs."

Andrews said some basic supplies got in last night but more support, including activities packs for children and meals, would be brought in today as services including kitchens ramp up.

He said the government was partnering with the Red Cross to provide residents with a single point of contact to ask for whatever they need.

"It will be everything from food and baby formula to food for a pet," he said.

"I do expect more to be found," Professor Sutton said.

He said in the setting of a densely populated high-rise tower, the virus has "genuinely explosive potential".

"So I think this is an appropriate public health response."

Of the day's 74 new cases, 16 were linked to controlled outbreaks, four were found in routine testing and 53 are still under investigation.

One is a returned traveller in hotel quarantine.

Victoria now has 543 active cases, with 26 people in hospital including three in intensive care.

Housing Minister Richard Wynne said his phone had been "running off the hook" with people wanting to find out how they could help those in lockdown.

"I'm really overwhelmed by the compassion of so many Victorians," he said.