There are major concerns for the mental health of the residents of nine Melbourne tower blocks that have been locked down amid fears Covid-19 could spread out of control in the high rises. 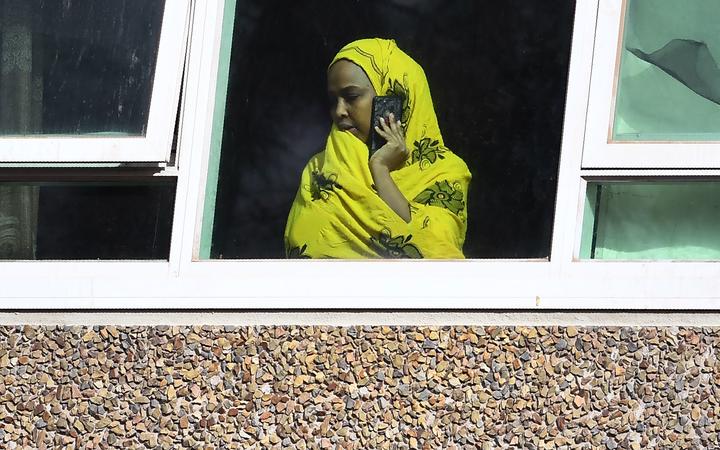 Many of the tower block residents have fled war-torn countries in East Africa. Photo: AFP

There are 3000 residents in the public housing blocks in Flemington and North Melbourne. Some of the residents are refugees from war-torn nations who are making new lives in Australia.

On Saturday the residents were told to stay in their apartments and since then there's been a heavy police presence stopping people from coming and going.

Announcing the closure of the Victoria's borders with neighbouring New South Wales, Premier Daniel Andrews said of today's 127 new cases in the state, 16 were detected in the public housing towers that have been locked down.

An additional 10 infections from earlier numbers have been linked to the towers, bringing the total in the outbreak to 53 cases.

Large scale testing is under way in the blocks that have shared facilities like lifts, corridors, foyers, rubbish areas and laundries raising concerns the high density living conditions could help Covid-19 spread.

Australian African Association president Nasa Ige, who has been outside the towers helping get information and supplies to residents, told RNZ's Checkpoint many of them did not speak English.

About 80 percent of the residents came from war zones in East African countries, including Somalia, South Sudan, Kenya and Eritrea.

He said their mental health was his biggest concern. Many were traumatised. He said it was hard enough to spend a 14-day quarantine in a five-star hotel.

"Imagine somebody in a tower that's been built in the 1940s. There's no air, there's no sun, nothing, you can't move around - you're just stuck in a very small apartment, it's very, very hard."

A mother of seven living in one of the tower blocks said the lockdown imposed on her building was intimidating.

Amal Ahmed told Checkpoint that despite being good citizens and following restrictions, they're being treated like animals. 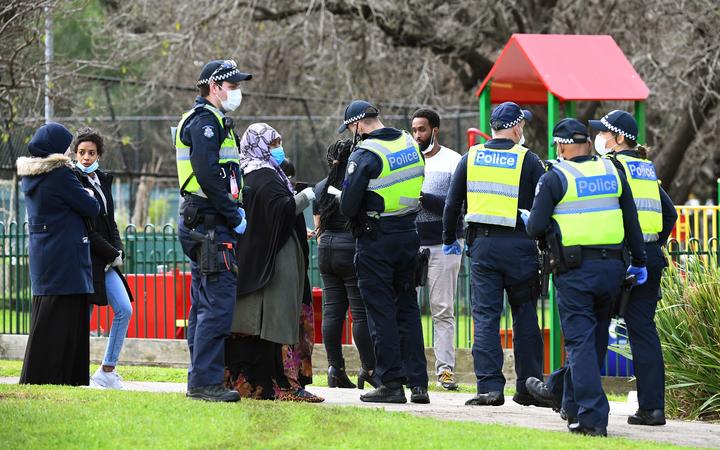 Police officers speak to people outside one of the nine locked down towers. Photo: AFP

She said there are a lot of police outside the building despite the fact they had nothing wrong.

She said it was overwhelming being unable to take her children out to the park and other places. "We're just in complete misery."

Ahmed said the food being delivered was insufficient for a large family and the cooked food was unsafe because it was left on the floor on thin layers of paper.

She wished she could be allowed to go shopping for some essential items and said the residents were being treated like "out-of-control animals" and "second-class citizens". 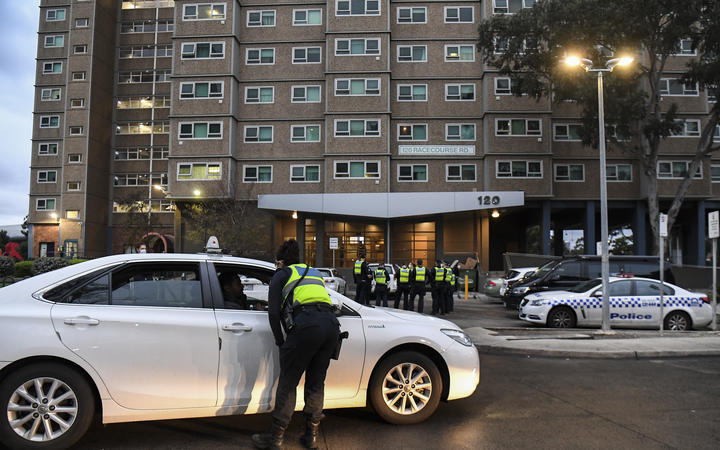 Police guard the entrance to one of the tower blocks. Photo: AFP

"We're being treated unfairly. This government is using power against us, it's abuse of power."

Residents in other towers nearby were free to move around the city while towers such as hers were locked down.

Initially they were told they would be confined for five days but she was now hearing it would be 14 days which would be a disaster when trying to cope with her children.

Length of lockdown may be reassessed - Premier

In Saturday's announcement the Premier said the "hard lockdown" imposed on the towers would last for at least five days, but "detention order" notices delivered to the residents said it would run for 14 days.

Andrews said the length of the lockdown could be reassessed.

"Once all residents are tested we'll have more options based on data, and hopefully that means we can have a different set of rules that are not quite so hard in terms of the hard lockdown that we have put in place," he said.

As well as the problems faced by residents of an apartment block in containing the spread, tenants have told the ABC about broken lifts making it "impossible" to safely distance.

Melissa Wehan, who lives in one of the Racecourse Rd buildings in Flemington, told the ABC it was "inevitable" the virus would spread in her block.

She said there was a lack of hand sanitiser around the building, including in communal spaces.

Other tenants expressed concern about the lack of information in languages other than English.