Russia has quit a voluntary United Nations arrangement that aimed to protect hospitals and humanitarian aid deliveries in Syria from being hit by the warring parties. 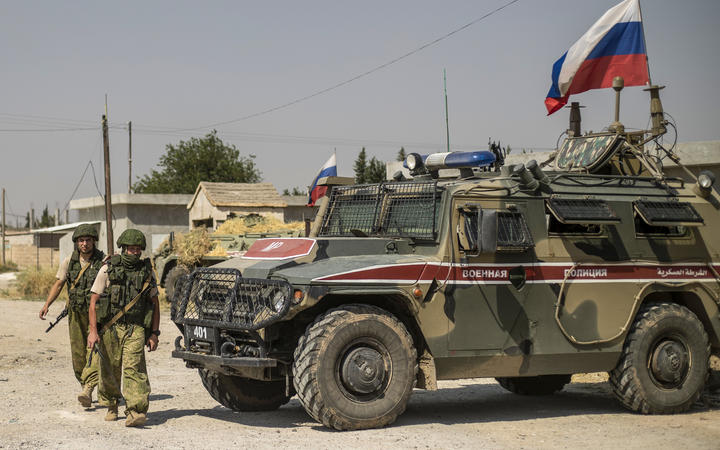 Russian soldiers reposition in the town of Derouna Arha near the Syrian border with Turkey on June 16, 2020. Photo: Delil Souleiman / AFP

Russia made the decision following an internal UN inquiry in April found it was "highly probable" the Syrian government or its allies carried out attacks on three healthcare facilities, a school and a refuge for children in northwest Syria last year.

Russia believed the United Nations should give any relevant information to Syrian authorities, he said.

"We do not see withdrawal as a threat to the humanitarian workers on the ground if information provided is accurate and trustworthy," Nebenzia told Reuters.

Russia has provided military support to Syrian President Bashar al-Assad in the civil war, which erupted after Assad cracked down on pro-democracy protesters in 2011.

Russia and Syria have said their forces are not targeting civilians or civilian infrastructure and have long-questioned the sources used by the United Nations to verify attacks.

Under the UN deconfliction arrangement, the locations of UN supported facilities and other humanitarian sites like hospitals and health centers had been shared with the warring parties in a bid to protect them.

However, the United Nations has questioned whether it made them a target.

In a note to aid groups, seen by Reuters, the UN Office for the Coordination of Humanitarian Affairs (OCHA) confirmed Russia's withdrawal.

"The United Nations is concerned about the withdrawal of the Russian Federation from the notification mechanism and is examining the implications of this decision for humanitarian personnel and operations in Syria," the UN note said.

The United Nations said in the note that it would discuss the situation further with Russia. It also said all parties - whether they participated in the deconfliction arrangement or not - were still bound by international humanitarian law.

"We and other groups will continue to investigate and document the deliberate bombings of hospitals and other grave crimes in Syria."