Australia's Department of Foreign Affairs and Trade says it is "deeply saddened" by a Chinese court's decision to sentence an Australian man to death for drug smuggling. 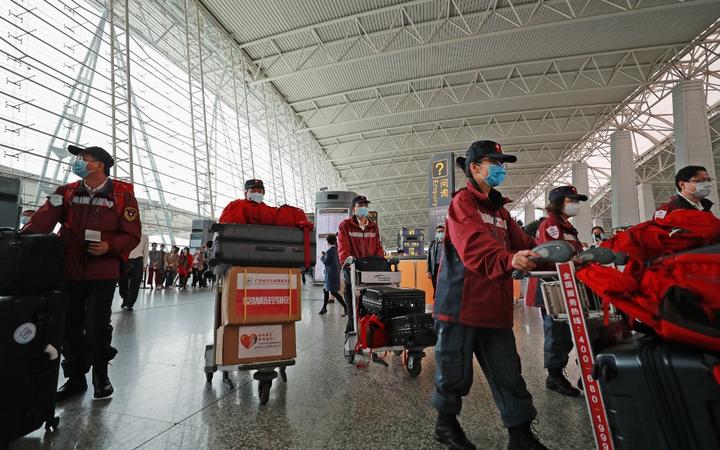 The Australian man was arrested at Guangzhou Baiyun Airport in December 2013. Photo: AFP

According to its website, the Guangzhou Intermediate People's Court said the man's sentence was delivered on 10 June.

The ABC understands Karm Gilespie was arrested at Guangzhou Baiyun Airport, north-west of Hong Kong, in December 2013 with more than 7.5 kilograms of methamphetamine in his checked luggage.

A spokesperson for the Department of Foreign Affairs and Trade told the ABC that it was providing consular assistance "to an Australian man detained in China".

"We are deeply saddened to hear of the verdict made in his case. Australia opposes the death penalty in all circumstances, for all people.

"We support the universal abolition of the death penalty and are committed to pursuing this goal through all the avenues available to us. Owing to our privacy obligations, we will not provide further comment," it said.

The Guangzhou Intermediate People's Court provided a name in Chinese which can be transliterated as Cam Gillesby. Some Chinese media outlets have identified the man as Cam Giles.

The ABC has contacted the Guangzhou Intermediate People's Court for comment.

Australia previously expressed concern over China's use of capital punishment after Canadian national Robert Schellenberg was given a death sentence in early 2019.

Schellenberg was arrested in 2014 for allegedly attempting to smuggle 222kg of methamphetamine from China to Australia.

"We expect at a level of principle that not only the death penalty should not be applied but also wherever people are in trouble, the rule of law ought be applied fairly," he said.

China's foreign ministry accused Birmingham of interfering and said he "owed an explanation to his people".

In 2015, Australian man Bengali Sherrif was sentenced to death after being arrested at Guangzhou airport after trying to smuggle methamphetamine from China to Australia.

According to Amnesty International, China carries out the most death sentences of any country, with thousands thought to have been put to death in 2019 alone.

No data about executions is publicly available as the ruling Communist Party considers details of executions "state secrets".

Relations between Australia and China have deteriorated in recent months, with China's Ministry of Education urging Chinese students this week to reconsider studying in Australia due to the risk of Covid-19 and "racist incidents targeting Asians".