Another night of outrage left stores looted and cars smouldering in many US cities on Sunday as curfews failed to quell violence that replaced peaceful daytime demonstrations over the death of a black man seen on video gasping for breath as a white Minneapolis police officer knelt on his neck. 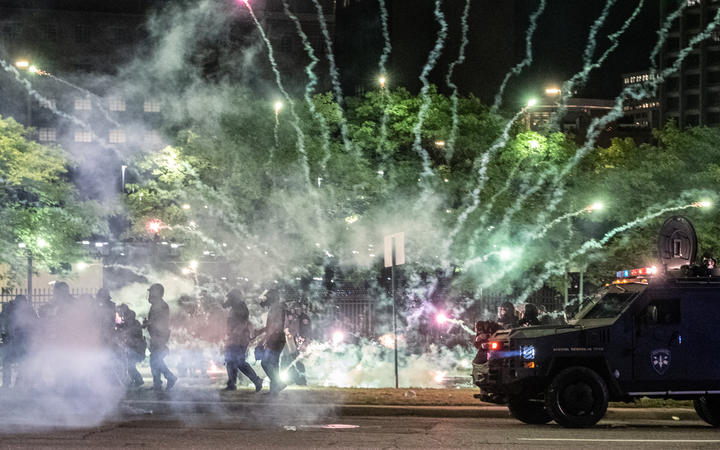 In Salt Lake City, a man aimed a bow and arrow at protesters and was attacked by the crowd. Fires burned in the streets of Los Angeles. Protesters ripped apart an American flag in Raleigh, North Carolina.

Police fired rubber bullets and tear gas in many cities.

In New York City, police arrested about 350 people overnight and 30 officers suffered minor injuries. Mayor Bill de Blasio said police conduct was being investigated, including widely shared videos showing a police sports utility vehicle in Brooklyn lurching forward into a crowd of protesters who were pelting the car with debris.

De Blasio said he had not seen another video showing an officer pulling down the mask of a black protester who had his hands in the air, then spraying a substance in his face.

The sight of protesters flooding streets fuelled a sense of crisis in the United States after weeks of lockdowns due to the coronavirus pandemic, which has seen millions thrown out of work and has disproportionately affected minority communities.

The closely packed crowds and many demonstrators not wearing masks sparked fears of a resurgence of Covid-19, which has killed more than 100,000 Americans.

Protests also flared in Chicago, Seattle, Salt Lake City, Cleveland, and Dallas, where rioters were seen on video beating a store owner who chased them with a large machete or sword. Police said on Sunday that the man was in a stable condition. 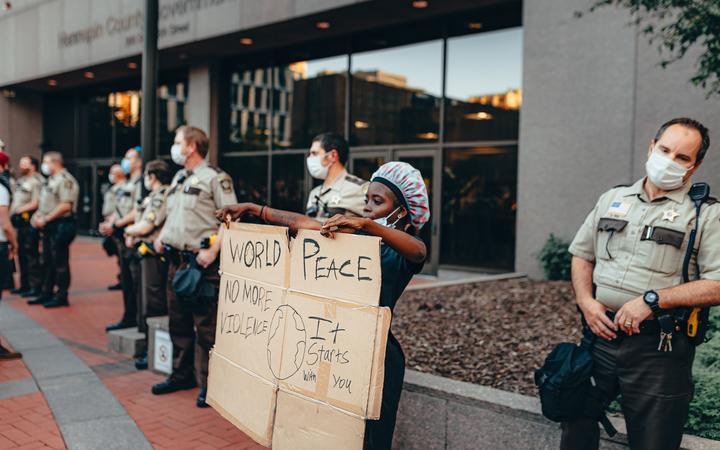 US Attorney General William Barr said on Saturday "outside radicals and agitators" had hijacked protests in US cities over the death of an unarmed black man in police custody in Minneapolis.

"Groups of outside radicals and agitators are exploiting the situation to pursue their own separate and violent agenda," Barr said in an on-camera statement.

"It is a federal crime to cross state lines or use interstate facilities to incite or participate in violent rioting and we will enforce those laws," he added.

beautiful moments during protests that the media won’t show; a thread

The clashes in Minneapolis marked the fifth night of arson, looting and vandalism in parts of the state's largest city, and its adjacent capital, St. Paul. The state's governor said on Saturday that he was activating the full Minnesota National Guard for the first time since World War Two.

About 170 stores have been looted and some burned to the ground in St. Paul, its mayor said on Sunday.

"We are seeing in St. Paul and obviously around the country this level of rage and anger that frankly is legitimate, as we see this horrific video of George Floyd being just suffocated to death," Mayor Melvin Carter told CNN. "Unfortunately, it's being expressed right now, over the past week, in ways that are destructive and unacceptable."

While covering the protests in Minneapolis on Saturday night, two members of a Reuters TV crew were hit by rubber bullets and a Reuters photographer's camera was smashed as attacks against journalists covering civil unrest in US cities intensified. In response to the protests, Target Corp announced it was closing 100 stores, with about 30 in Minnesota.

The administration of President Donald Trump, who has called protesters "thugs", will not federalize and take control of the National Guard for now, national security adviser Robert O'Brien said on Sunday. 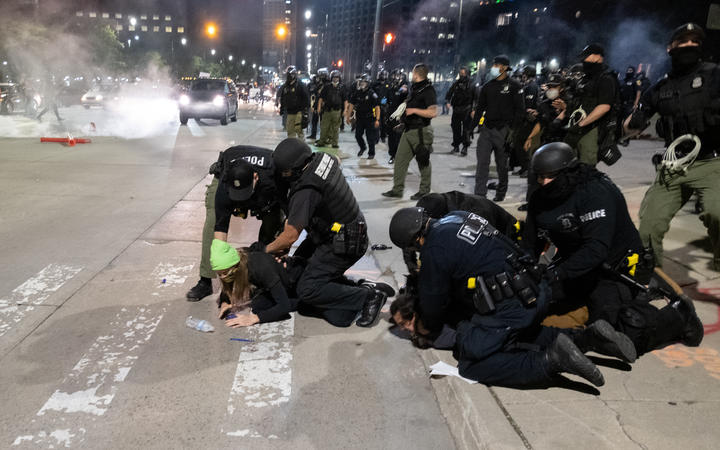 Demands for an end to police brutality have spread globally.

In London, hundreds of protesters took to Trafalgar Square on Sunday chanting "no justice, no peace." On Saturday, a crowd descended on the U.S. Embassy in Berlin calling for the police officers to face justice.

The arrest on murder charges on Friday of Derek Chauvin, the police officer seen kneeling on Floyd's neck, has failed to satisfy protesters. Three officers who stood by as Floyd died have yet to be charged.

Floyd's name is only the latest to be chanted by protesters over the perceived lack of police accountability for violent encounters that resulted in the death of black men.

The issue ignited in 2014 with the shooting death of a black 18-year-old, Michael Brown, by a white police officer in Ferguson, Missouri, where police fired tear gas at protesters on Saturday night.