Scientists in Australia say they have found a way to help coral reefs fight the devastating effects of bleaching by making them more heat-resistant. 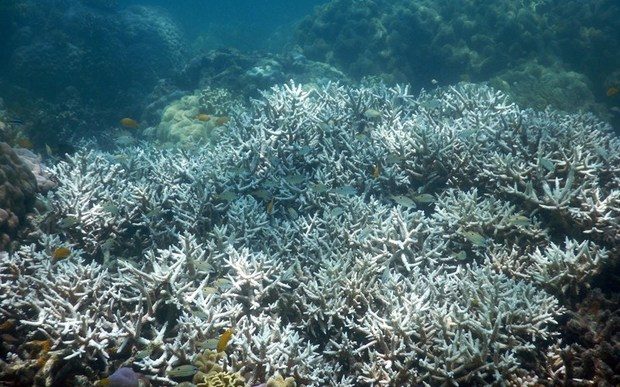 Rising sea temperatures make corals expel tiny algae which live inside them. This turns the corals white and effectively starves them.

In response, researchers have developed a lab-grown strain of microalgae which is more tolerant to heat.

When injected back into the coral, the algae can handle warmer water better.

The researchers believe their findings may help in the effort to restore coral reefs, which they say are "suffering mass mortalities from marine heatwaves".

The team made the coral - which is a type of animal, a marine invertebrate - more tolerant to temperature-induced bleaching by bolstering the heat tolerance of its microalgal symbionts - tiny cells of algae that live inside the coral tissue.

They then exposed the cultured microalgae to increasingly warmer temperatures over a period of four years. This assisted them to adapt and survive hotter conditions.

"Once the microalgae were reintroduced into coral larvae, the newly established coral-algal symbiosis was more heat-tolerant compared to the original one," lead author Dr Patrick Buerger, of Csiro, Australia's national science agency, said in a statement.

"We found that the heat-tolerant microalgae are better at photosynthesis and improve the heat response of the coral animal," Prof Madeleine van Oppen, of the Australian Institute of Marine Science and the University of Melbourne, said.

"These exciting findings show that the microalgae and the coral are in direct communication with each other."

The next step is to further test the algal strains across a range of coral species.

How bad is coral bleaching?

"Climate change has reduced coral cover, and surviving corals are under increasing pressure as water temperatures rise and the frequency and severity of coral bleaching events increase."

Warmer sea temperatures - particularly in February - are feared to have caused huge coral loss across it.

Scientists say they have detected widespread bleaching, including extensive patches of severe damage. But they have also found healthy pockets.

Two-thirds of the reef - the world's largest such system - were damaged by similar events in 2016 and 2017.