Former Trump campaign chairman Paul Manafort has been released from prison to serve the remainder of his sentence at home due to Covid-19 fears. 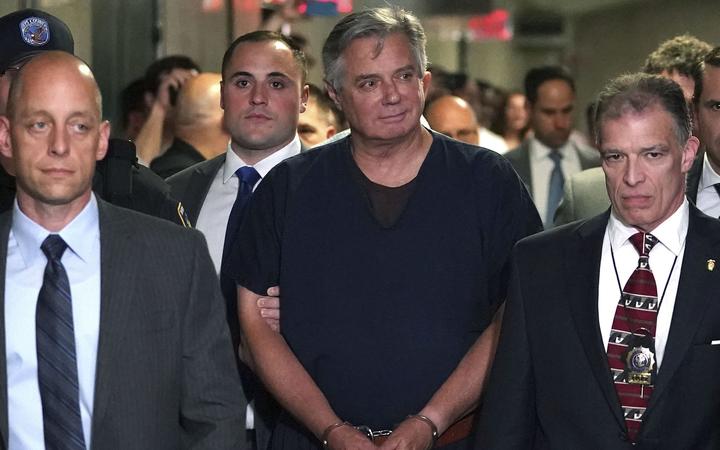 He had served a little over a year of a seven-and-a-half year sentence in jail.

Manafort, 71, was convicted of conspiracy and fraud charges that stemmed from a Justice Department inquiry into Russian election meddling.

There are more than 2800 confirmed Covid-19 cases among US federal prisoners and 50 deaths.

According to the latest data from the federal Bureau of Prisons (BOP), there are 139,584 federal inmates in federal custody, and another 11,235 in community facilities, plus around 36,000 staff. According to the BOP, 2818 inmates and 262 staff have tested positive for coronavirus.

There have not been any confirmed cases of the disease at Manafort's prison, FCI Loretto in Pennsylvania.

Last month, Manafort's lawyers sought for his release to home confinement in Northern Virginia, arguing that his "age and pre-existing health conditions" put him at high risk for infection in prison.

What is happening in US prisons?

At the end of March, Attorney General William Barr told the BOP to grant home confinement to virus-vulnerable, low-risk inmates. His memo noted "some offenses, such as sex offences, will render an inmate ineligible for home detention".

In April, Mr Barr directed the BOP to transfer inmates at risk for Covid-19 out of three federal facilities grappling with outbreaks, and told officials to review inmates at other similar facilities where the virus was affecting operations.

The BOP reports 2471 inmates have been moved to home confinement due to the pandemic since 26 March.

In Pennsylvania, the governor ordered its corrections department to allow nonviolent and at-risk inmates to be momentarily released.

Though the administration said as many as 1800 people would be eligible, just 150 have been released as of 12 May, according to state corrections data.

US jails and prisons, both federal and state, have been criticised for their handling of virus outbreaks and advocates continue to call for non-violent inmates to be released.

Critics say prisoners are uniquely at-risk for the disease given overcrowding and unhygienic conditions. Inmates often lack soap and hand sanitiser is banned due to its alcohol content.

The American Civil Liberties Union predicts 100,000 more Covid-19 deaths than current projections "if jail populations are not dramatically and immediately reduced", noting conditions in American facilities are "substantially inferior" to other Western nations.

Another ex-Trump aide, the president's former lawyer Michael Cohen, 53, is said to be expecting home release from prison in New York later this month.

A number of other high-profile convicts, including financial fraudster Bernie Madoff, 82, and comedian Bill Cosby, 82, have also appealed for release due to the virus.

Who is Paul Manafort?

Manafort served as President Trump's campaign chairman from June to August 2016, when he was forced to resign over his previous work in Ukraine.

He was convicted on a range of banking fraud, tax evasion, conspiracy and witness tampering charges from two separate cases relating to his work as a political consultant.

Manafort also agreed to co-operate with Special Counsel Robert Mueller's investigation in a deal for a possible lighter sentence. However, just two months later that plea deal collapsed as investigators said Manafort had repeatedly lied to the government.