The number of Americans seeking unemployment benefits has hit a record high for the second week in a row as the economic toll tied to the coronavirus intensifies. 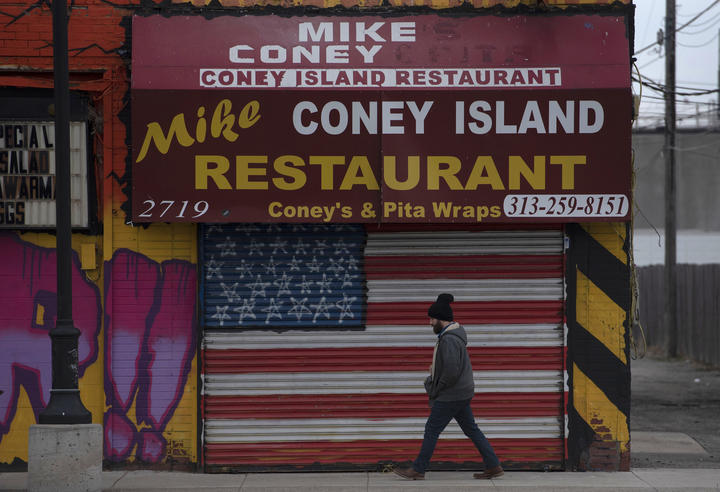 A man passes a closed restaurant near the Eastern Markets in Detroit, Michigan Photo: AFP

That is nearly double the week earlier, which was also a new record.

The deepening economic crisis comes as the number of cases in the US soars to more than 216,000.

With the death toll rising to more than 5000, the White House recently said it would retain restrictions on activity to try to curb the outbreak.

Analysts at Bank of America warned that the US could see "the deepest recession on record" amid forecasts that the unemployment rate could hit more than 15 percent.

The outlook is a stark reversal for the world's biggest economy where the unemployment rate had been hovering around 3.5 percent.

More than 3.3 million people filed claims two weeks ago, eclipsing the previous record of 695,000, set in 1982 and bringing the two-week total to about 10 million.

By comparison, 9 million jobs were lost in the 2008 financial crisis.

'This is a portrait of disaster'

The most recent figure was worse than many economists had feared.

"I don't usually look at data releases and just start shaking," said Heidi Shierholz, former chief economist at the US Department of Labor and now policy director at the Economic Policy Institute. "This is a portrait of disaster ... It's like nothing we've ever seen before. It represents just incredible amounts of grief and suffering."

Workers in accommodation and food services were hit hard again this week, the Department of Labor said.

But it added that states are reporting "a wider impact across industries".

"With this report there should be little doubt that ... US is already in deep recession and the global economy will be too", tweeted Mohamed A El-Erian, chief economic adviser to financial services firm Allianz.

The US recently passed a more than $2 trillion rescue bill, which funds direct payment for households, assistance for businesses and increased unemployment benefits.

It also made more people eligible to receive benefits, including workers whose jobs are suspended rather than cut. There is speculation the government may provide further relief.

Unlike other countries such as the UK and New Zealand, the US has not implemented a programme that pays firms to keep workers on the payroll.

This is one reason the numbers are so stark, Ms Shierholz says.

"There's an attempt at it," Ms Shierholz said, pointing to the expanded eligibility. "But this concept of keeping workers on payroll through a downturn is not well socialised in the US. It's just not how we've done things in the past."