Mainland China, where the global coronavirus pandemic began in December, reported dwindling new infections on Wednesday, but it also published the daily change in asymptomatic cases for the first time, creating a murkier picture of the trends. 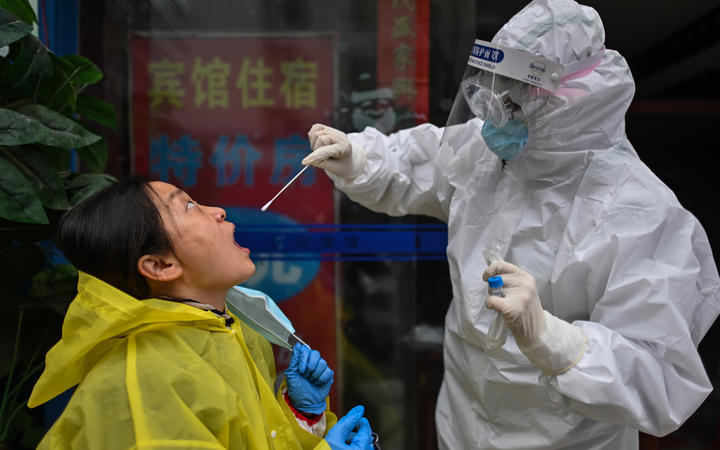 A medical worker takes a swab sample from a person to be tested for the COVID-19 novel coronavirus in Wuhan, China's central Hubei province on March 29 Photo: AFP

There were 36 new cases on Tuesday, almost all of them involving travellers arriving from overseas, the National Health Commission said, down from 48 a day earlier, and bringing the total number of confirmed cases to 81,554.

But the tally excludes the 130 new cases involving people who do not exhibit symptoms of the highly contagious disease, statistics from the health authority showed. China began publishing daily data on asymptomatic cases on Wednesday.

Some other countries include asymptomatic cases that test positive for their virus in the overall tally of confirmed cases, as per World Health Organization guidelines.

People have expressed fears on Chinese social media that asymptomatic carriers could be spreading the virus unknowingly, especially as authorities are easing travel restrictions from the epidemic's hotspots, now that infections have subsided.

WHO epidemiologist Maria van Kerkhove told a conference in Geneva last week that in the majority of cases, the main drivers of coronavirus transmission were symptomatic patients, and many of the people listed as "asymptomatic" would go on to develop symptoms a few days after their diagnosis.

But China has now decided that greater screening needed to be devoted to asymptomatic cases and the people with whom they have been in contact.

The National Health Commission reported that there were 1367 asymptomatic cases under observation as of Tuesday, down from 1541 on Monday.

Seven deaths from the virus were reported on Tuesday, up from just one the day before. All but one took place in Hubei province, where the epidemic began.

The one reported new case of a local infection on Tuesday was in Guangdong province.

The total number of imported cases stood at 806, but while this category accounts for a small percentage of the overall number of confirmed cases, authorities have barred most foreigners from entering and introduced more rigorous checks on citizens returning from abroad as they fear imported cases could trigger a second wave of infection.