Countries affected by Covid-19 entered another week of strict quarantine and several nations introduced new economic stimulus to aid citizens and companies hit by the pandemic. 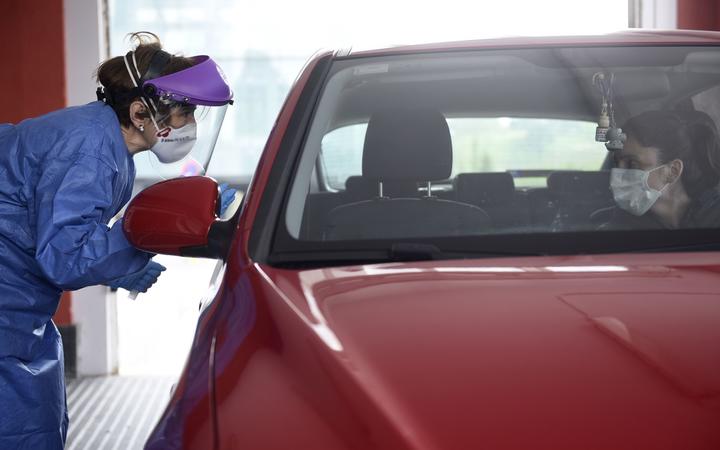 A health worker dressed in protective gear takes samples from a driver at a drive-through testing centre for the Covid-19 disease at Donostia Hospital in San Sebastian on 25 March. Photo: AFP

More than 738,500 people have been infected across the world and about 35,000 have died, according to a Reuters tally.

In Europe, Italy's government said it would extend its nationwide lockdown measures at least until the Easter season in April.

More than a dozen Russian regions including the city of St Petersburg introduced a partial lockdown.

Finland will extend most of its measures to contain the coronavirus outbreak by one month until 13 May from 13 April.

Denmark may gradually lift a lockdown after Easter if the numbers of coronavirus cases and deaths remain stable.

Spain overtook China in the number of those infected with coronavirus.

People cheered the US Navy hospital ship Comfort as it sailed into New York, a beacon of the national effort to stanch the coronavirus outbreak at its US epicenter as the number of cases soared.

The US government has cut deals with Johnson & Johnson and Moderna Inc and said it is in talks with at least two other firms to expand manufacturing capacity within the United States for coronavirus vaccines.

Brazil's President Jair Bolsonaro stepped up his stand-off with state governments by suggesting that democracy could be at risk if the coronavirus crisis leads to social chaos.

Colombia's ELN guerrillas declared a unilateral cease-fire for one month from April 1 in an effort to help stem the spread.

Police in India fired tear gas to disperse a stone-pelting crowd of migrant workers defying a three-week lockdown against the coronavirus that has left hundreds of thousands of poor without jobs and hungry.

Tokyo's governor called on residents to avoid outings, but said it was up to Prime Minister to declare a state of emergency.

The World Health Organization has not shared with member states information Taiwan provided including details on its cases and prevention methods, its foreign ministry said.

Saudi Arabia will finance treatment for anyone infected with the coronavirus in the country, the health minister said, while the agriculture ministry took steps to boost wheat and livestock supplies.

An aide to Israeli Prime Minister Benjamin Netanyahu has tested positive but initial findings indicate she had not posed an infection risk to the 70-year-old leader.

Global stocks rose on Monday despite a drop in oil prices to their lowest levels since 2002, as central banks and the United States tried to contain damage from the coronavirus that has upended the world economy.

Trade ministers from the Group of 20 major economies agreed on Monday to keep their markets open and ensure the continued flow of vital medical supplies, equipment and other essential goods.

The International Monetary Fund said relaxing the euro zone's fiscal rules and support from the European Central Bank and European Stability Mechanism is critical to a strong regional response.

Banks across the euro zone are ditching dividends to shore up reserves as the outbreak threatens to tip the world into a deep recession.

Switzerland may have to expand its emergency fund for companies after banks loaned out $US6.89 billion in the first four days of the scheme.

Peru is readying a stimulus package worth around 12 percent of its gross domestic product.

The outbreak will push Germany into recession in the first half of this year and could result in its output contracting by up to 5.4 percent this year.

Collapsing oil prices are costing some OPEC members not only lost revenue when they most need it to tackle the coronavirus crisis, but also market share they may never recoup.

South Korea will make emergency cash payments to all but the richest families and draw up a second supplementary budget next month.

Nigeria's currency eased to 415 naira per dollar on the black market on Monday after its president ordered a lockdown of two of the country's biggest cities.