The US State Department has summoned the Chinese ambassador to the United States to protest against comments by Beijing suggesting the US military might have brought the coronavirus to Wuhan. 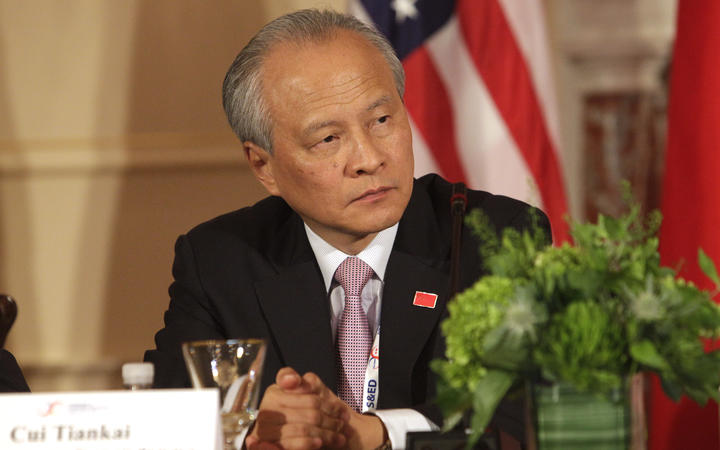 China's ambassador to the US, Cui Tiankai, has been called in by the US State Department to discuss claims the coronavirus might have been released by the US military. Photo: AFP

The State Department official, who spoke on condition of anonymity, said China was seeking to deflect criticism of its role in "starting a global pandemic and not telling the world."

"Spreading conspiracy theories is dangerous and ridiculous. We wanted to put the government on notice we won't tolerate it for the good of the Chinese people and the world."

China's embassy did not respond to requests for comment.

Despite the signs of tension, US President Donald Trump praised Beijing last week for its "data sharing".

Asked by a reporter during a White House news conference about "odd narratives" being offered by some Chinese officials, Trump appeared to brush off any concern, saying he had read one article on the subject, but that he did not think it was representative of his discussions with Chinese President Xi Jinping.

"When did patient zero begin in US? How many people are infected? What are the names of the hospitals? It might be US army who brought the epidemic to Wuhan. Be transparent! Make public your data! US owe us an explanation!" Zhao tweeted in English.

The episode is the latest in an increasing war of words between Washington and Beijing, whose already strained ties over issues including trade, intellectual property rights and press freedom have further been tested by the virus outbreak.

The coronavirus, which emerged in China in December, has spread around the world, pummelling financial markets, halting industry, bringing some flights to a standstill, closing schools and forcing the postponement of sports events and concerts.

Zhao's comments came days after Robert O'Brien, the US national security adviser, said China had reacted slowly to the coronavirus, probably costing the world two months when it could have been preparing.

Wuhan was ground zero for the outbreak, which the World Health Organisation this week labelled a pandemic. The virus has infected more than 127,000 people worldwide, including nearly 81,000 in mainland China, and killed more than 5000 people.

Beijing was criticised for initially attempting to censor some Chinese doctors who sounded an alarm over the virus. Since January, it has imposed severe containment measures, effectively locking down Wuhan and the surrounding Hubei province, home to 60 million people.

US Secretary of State Mike Pompeo has complained that the US response had been hindered by what he called imperfect data from Beijing.

He and several other US politicians have angered Beijing by referring to the "Wuhan virus." In a national address on Wednesday, President Donald Trump called the outbreak a "foreign virus" that started in China.