About 400 cruise ship passengers and staff have been barred from disembarking in Hobart due to concerns over Tasmania's coronavirus status - however, a few have managed to get off the ship. 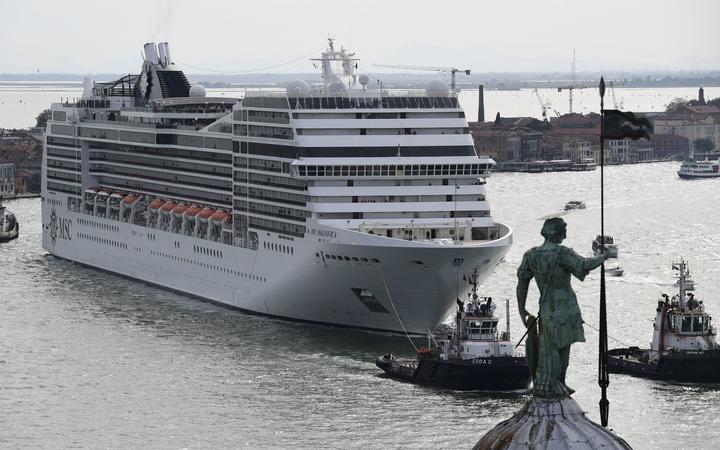 There is not thought to be an outbreak of coronavirus on the MSC Magnifica ship. [FILE PIC] Photo: AFP

The MSC Magnifica, which arrived from New Zealand this morning, has docked in Hobart.

Cruise company MSC Cruises had taken the decision to stop people disembarking "to ensure [passengers'] health and safety, in response to potential risk of Covid-19", according to a TasPorts spokesperson.

The Mac 2 cruise terminal will be closed today as part of normal procedures.

"We obviously act on the advice of the Australian Border Agency in terms of what occurs nationally, but controls that are set by the Australian government are the ones we take into account, and also the advice of our own health experts and the Director of Public Health."

"My understanding is there's no outbreak of coronavirus on the ship itself and this is a precautionary measure that the ship [company] has taken."

Roger Preston-Smith, who works on the Magnifica, decided to disembark.

"I don't think most people knew that."

Preston-Smith said he had "lots of friends in Australia and I just went, 'I'd rather be out here.'

"I knew some other people were leaving, people are leaving in Sydney a lot, but when I found this out I went, 'Do it while you can.'"

He said he was not fussed about having to give up his income.

"I don't want to be stuck on that ship, it's too stressful. They're just going to go out to sea and who knows how long it will sit there."

Fifth coronavirus case a man in his 60s

Meanwhile, the government has confirmed that Tasmania's fifth case of coronavirus is a man in his 60s who recently travelled in North America and Canada.

He is in a stable condition and in isolation at the Royal Hobart Hospital.

"Because of the period of time between him arriving in Tasmania and the onset of his symptoms, he was not infectious on his international or domestic flights," she said.

A total of 224 people in the state have been tested as of midday yesterday for the virus.

So far, all five cases of the virus in the state have been related to overseas travel, rather than transmission within the community.