One of America's most famous music festivals, South by Southwest, has been cancelled due to Covid-19 coronavirus fears. 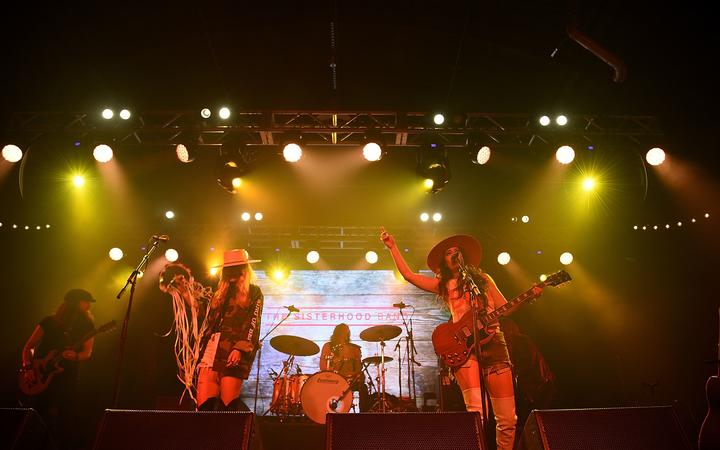 Ruby Stewart and Alyssa Bonagura of The Sisterhood perform during the 2018 SXSW festival in March 2018 in Austin, Texas. Photo: AFP

Organisers of the annual event in Austin, Texas, said they had no choice but to call it off for the first time in its 34-year history.

The move was ordered by Austin Mayor Steve Adler, who declared a local disaster.

The US coronavirus death toll stands at 14, but over 200 people have been confirmed sickened nationwide.

All but one of the deaths have occurred in Washington state.

The World Health Organisation says nearly 100,000 people worldwide have contracted the coronavirus. More than 3000 people have died - the majority in China.

In a statement on Friday, SXSW said it was "devastated" by the news, but respected the decision.

Event organisers said: "'The show must go on' is in our DNA, and this is the first time in 34 years that the March event will not take place.

"We are now working through the ramifications of this unprecedented situation."

One of those disappointed at the cancellation is New Zealand based singer Tami Neilson.

Her manager Pip Ryan-Kidd said it was not just the financial aspect that was a blow.

Tami Neilson is also set to tour Spain and France but a few of the venues have already cancelled, Ryan-Kidd said.

The 10-day event attracts leading figures from the spheres of technology, music and media to mingle in the Texas capital.

In 2018, visitors spent $US350 million ($NZ550m) during the festival, according to a study commissioned by event organisers.

The event's organisers had been under pressure to call it off. A petition to that effect on change.org received 55,000 signatures.

Several other large tech conferences have been cancelled in recent weeks including Google's Cloud Next conference, Mobile World Congress and The Game Developers conference.

Meanwhile, US Vice President Mike Pence, who is co-ordinating the nation's response to the outbreak, confirmed that 21 people had tested positive for the coronavirus on a cruise ship that had been quarantined off the California coast.

He said 46 people aboard the Grand Princess had been swabbed - 19 crew and two passengers were found to be infected.

There are 3500 people on the vessel, including more than 2400 passengers, who have been confined to their cabins.

At the White House briefing, officials said the CDC had shipped out 900,000 coronavirus tests and that another 200,000 would be sent out on Saturday.

A further one million tests were expected to be sent out early next week, said officials.

On Thursday, Pence had acknowledged the US was short of coronavirus tests.

Earlier, the White House briefly cancelled the president's visit to the Centers for Disease Control, after someone at the globally renowned public health institute in Atlanta, Georgia, was suspected of being infected with the disease.

But the trip was later restored to Trump's schedule after the person tested negative.

Also on Friday local time, Trump - a self-confessed germaphobe - was seen shaking hands with people as he visited a community hit by a tornado in Tennessee.

On Thursday, he told Fox News that he would continue shaking hands with voters, despite public advisories from health officials against such physical contact.

"I'll be shaking hands with people," he said, "and they want to say hello and hug you and kiss you. I don't care".