By Frank Gardner for the BBC

Abduction, forced return, torture and a campaign of intimidation. Today, the damning allegations made against the billionaire ruler of Dubai, Sheikh Mohammed Bin Rashid Al-Maktoum, by his former wife, Princess Haya Bint Al-Hussain, became established fact, published in a series of judgements by Britain's High Court. 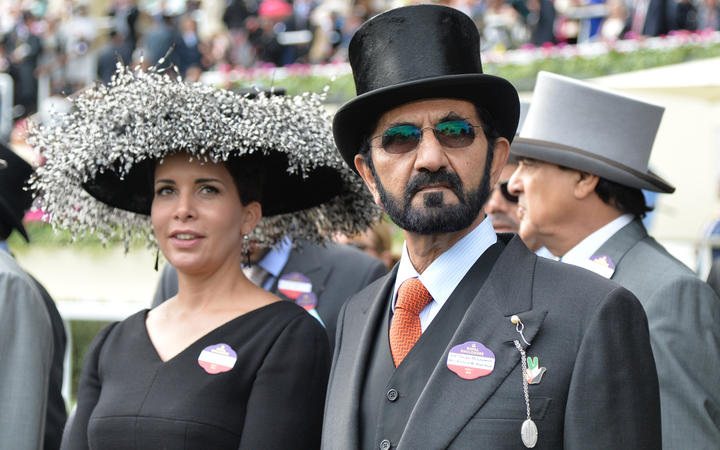 Sheikh Mohammad Bin Rashid Al Maktoum of UAE and his then wife, Princess Haya of Jordan during Day One of the Royal Ascot meeting. Photo: AFP

Following a high-profile case that began eight months ago, the court has published a Fact Finding Judgement (FFJ) in favour of Princess Haya who fled Dubai last year, along with her two children, telling friends she was in fear of her life.

Sheikh Mohammed had tried, unsuccessfully, to keep the judgement out of the public domain but had his appeal rejected after it was ruled to be in the public interest. The ruler of Dubai was found to have "not been open and honest with the court".

After hearing extensive witness statements over a period of time, the court found Sheikh Mohammed to have been responsible for the abduction and forced return of two of his daughters from another marriage.

Sheikha Shamsa fled the family's UK estate in Surrey in 2000 but was later recaptured in Cambridgeshire by agents of the Sheikh, allegedly injected with a sedative and forcibly returned to Dubai where she remains in captivity.

A request by Cambridgeshire Police to visit Dubai to investigate her abduction was refused.

Sheikha Latifa made two unsuccessful attempts to flee her father's family, in 2002 and 2018.

After the first she was imprisoned by her father in Dubai for over three years. In the second attempt she was recaptured at sea off the Indian coast and forcibly returned to Dubai, where she remains under house arrest. The judge found her allegations of serious physical abuse amounting to torture, made by Latifa in a public video, to be credible.

The judge found that Sheikh Mohammed "continues to maintain a regime whereby both these two young women are deprived of their liberty".

Princess Haya of Jordan, 45, a daughter of the late King Hussain and a former Olympic equestrian, married Sheikh Mohammed of Dubai, 70, in 2004, becoming the sixth and youngest of his wives. They have two children, aged seven and 11.

Initially she believed his explanations of what had happened to the two princesses, namely that they had been "rescued" and were now safe with the family.

But by early 2019 Princess Haya had become suspicious and voiced her concerns. She had also begun an adulterous affair with her British bodyguard.

A campaign of intimidation by Sheikh Mohammed's agents began and the court heard that a gun was twice placed on her pillow with the safety catch off. A helicopter landed outside her house with a threat to remove her to a remote desert prison.

The judge ruled that "the father has therefore acted in a manner from the end of 2018, which has been aimed at intimidating and frightening the mother, and that he has encouraged others to do so on his behalf".

In April 2019 Princess Haya fled to Britain, taking her two children with her. The court heard how veiled threats from Sheikh Mohammed had left her terrified for her own safety, as well as fears that her children could be abducted and forcibly returned to Dubai.

In May 2019 she said he told her: "You and the children will never be safe in England". He published a poem entitled You lived, you died.

The court heard how the Sheikh had used his media contacts to generate a series of negative articles about Princess Haya, many of which were "wholly inaccurate".

These judgements, and the allegations upheld by them, are clearly a huge personal embarrassment to Sheikh Mohammed Al-Maktoum. It is hardly surprising therefore that his legal team tried their best to keep them out of the public domain.

While his former wife, Princess Haya, has a relatively low profile, Sheikh Mohammed is a global figure in the horseracing world where he is the owner and founder of Godolphin Stables.

He has often been photographed with the Queen. He is also a renowned figure across the Middle East, responsible for transforming the emirate of Dubai into the massive tourism, leisure and business destination it has become.

The rulings have been welcomed by human rights campaigners.