Japan is to ask all schools to close from Monday to prevent the spread of the coronavirus, PM Shinzo Abe says. 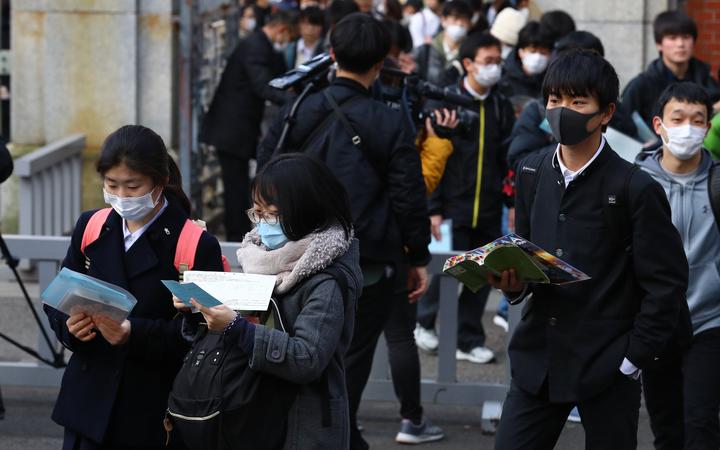 The closure - thought to affect 13 million students - will continue until the school year ends in late March.

For the second day running, more cases have been reported outside than inside China.

Dr Tedros urged governments to act swiftly and aggressively to contain the virus.

"This is not a time for fear. This is a time for taking action to prevent infection and save lives now," he said.

What measures are countries taking?

Globally, more than 80,000 people in more than 40 countries have been infected. Nearly 2,800 have died, the vast majority in China's Hubei province.

Iran, where 26 people have died, has cancelled Friday prayers in Tehran.

Saudi Arabia is stopping foreign pilgrims entering the country. It is not clear if the Hajj pilgrimage, which begins in July this year, will be affected

New Zealand's ban on foreign travellers from mainland China has been extended to 3 March.

Australia is extending a ban on foreign visitors from mainland China

Italy, where 14 people have died, has quarantined 11 towns

Greece is cancelling all carnival activities

Why is Japan closing schools?

The closures are set to take effect on Monday and will last until the end of spring vacation - typically in early April.

Mr Abe said the first weeks of March would be an "extremely critical period" for preventing virus transmission.

"The government attaches the top priority to the health and safety of children," he said.

It follows China's decision not to reopen schools on the mainland after the Spring Festival holiday and instead ask nearly 200 million students to follow classes online from their homes. Hong Kong is also keeping schools closed until April.

Many parents in Japan are concerned about what they will do with their children.

"My honest feeling - all schools on break? It's important to protect children, but what happens if they have working parents?" one parent wrote on social media.

More than 200 people have so far been infected with the coronavirus in Japan.

One woman in her forties in Osaka is said to have tested positive for a second time after earlier recovering.

A tour guide who had come into contact with visitors from the Chinese city of Wuhan where the outbreak began, she first tested positive in late January and was discharged from hospital on 1 February, a statement said.

Meanwhile, health officials in the southern Chinese province of Guangdong say some patients there who recovered and were discharged from hospital have again tested positive.

The authorities in both countries say they will track former patients after they are discharged from hospital.