Hundreds of passengers who tested negative for the new coronavirus have begun leaving a quarantined cruise ship in Japan amid heavy criticism over the country's handling of the outbreak. 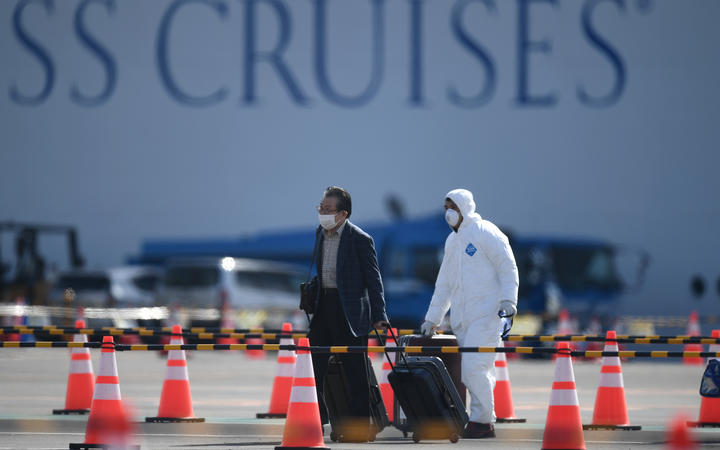 A passenger, left, leaves the Diamond Princess at Yokohama on Wednesday. Photo: AFP

One Japanese health expert who visited the Diamond Princess at the port in Yokohama said the situation on board was "completely chaotic".

US officials said moves to contain the virus "may not have been sufficient".

Passengers have described the difficult quarantine situation on the vessel.

At least 542 passengers and crew on the Diamond Princess have so far been infected by the Covid-19 virus - the biggest cluster outside mainland China.

The ship was carrying 3700 people in total.

New Zealand and is among several nations evacuating their citizens from the ship as the number of confirmed cases continues to rise. 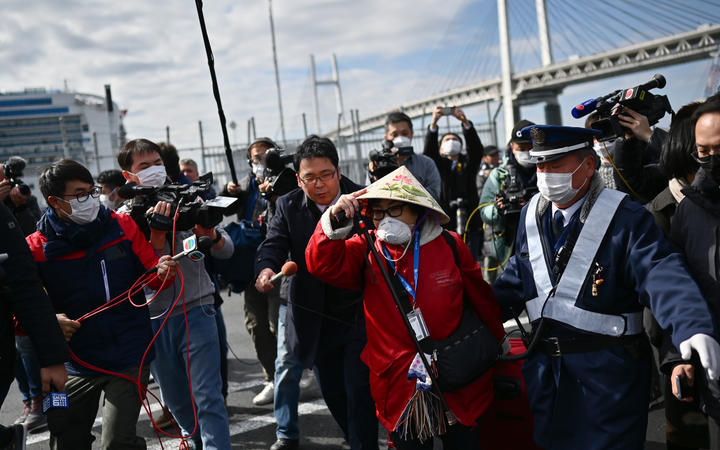 A passenger leaving after dismembarking the Diamond Princess cruise ship in quarantine at Yokohama. Photo: AFP

Hundreds of American passengers were removed and placed in quarantine on Sunday.

The UK said it hoped to fly 74 British nationals on the Diamond Princess back "later this week". A British couple on the ship - who had been giving regular updates to journalists via social media - confirmed on Wednesday they had tested positive for the virus.

Six New Zealand passengers from the cruise liner left Japan shortly after 5am on an Australian evacuation flight to Darwin and will go into 14 days quarantine on arrival in New Zealand. Two other passengers tested postive for coronavirus during final medical checks and were taken to hospital in Japan, New Zealand's Ministry of Foreign Affairs said.

The US, Canada, Australia and the UK will also place all those released from the ship in another 14 days' quarantine when they return home.

What are the fears over the passengers?

Several experts have questioned the effectiveness of the quarantine measures on the Diamond Princess.

Kentaro Iwata, professor at the infectious diseases division of Japan's Kobe University, described the situation on board as "completely inadequate in terms of infection control".

After visiting the ship, Prof Iwata posted a video to YouTube stating that the quarantine measures he witnessed failed to separate the infected from the healthy.

The expert said he was more afraid of catching the virus on board than he had been working in the field in Africa during the Ebola epidemic and in China during the Sars (severe acute respiratory syndrome) outbreak.

"[The quarantine measures] may not have been sufficient to prevent transmission among individuals on the ship," the US Centres for Disease Control and Prevention (CDC) warned.

"The rate of new infections on board, especially among those without symptoms, represents an ongoing risk," it said in a statement, adding that travel restrictions had been imposed on "all passengers and crew" preventing them from entering the US.

Japanese officials have defended their approach, saying that the majority of infections likely occurred before the quarantine period.

What is happening to those disembarking?

About 500 people who tested negative and who are not showing any symptoms were expected to disembark the Diamond Princess on Wednesday, with more leaving in coming days.

The released passengers made their way onto waiting coaches or into taxis, reports the BBC's Laura Bicker, who is at the port in Yokohama.

They will be allowed to return to life as normal, but will be contacted over a period of several days to check on their health, Japan's health ministry said.

Those who tested negative but had shared cabins with infected people will have to remain on board for additional quarantine.

The passengers come from more than 50 countries, raising concerns the ship could become the source of a fresh wave of global infections, our correspondent says.

South Korea, which reported 15 new cases of the coronavirus on Wednesday, said it would ban entry to any foreign passengers of the Diamond Princess.

How did the ship end up in quarantine?

The cruise ship was put in quarantine in Yokohama in early February after a man who disembarked in Hong Kong was found to have the virus.

Passengers were initially isolated in their cabins and later allowed to sporadically go out on deck.

Despite the quarantine measures, day by day the number of people to test positive for the Covid-19 virus grew rapidly.

Covid-19 has now claimed 2004 lives in China, according to the latest Chinese data released on Wednesday.

There have been 74,185 confirmed infections recorded in mainland China and about 700 cases in other countries.

Hong Kong on Wednesday said a 70-year-old man with underlying illnesses became the territory's second fatality. France, Japan, the Philippines and Taiwan have each had one death attributed to the virus.

China on Monday released a detailed study of more than 44,000 confirmed cases indicating that the overwhelming number of deaths occur among the sick and elderly.