When Canadian reporter Ryan Thorpe saw flyers recruiting for white nationalist group The Base he had two choices: write a bog-standard reaction piece or take a more drastic approach and go undercover to infiltrate the hate group and find out about its members. 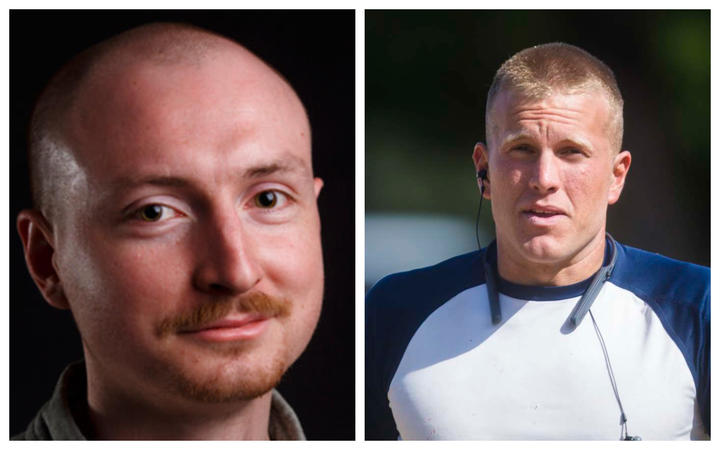 The Winnipeg Free Press writer chose the latter, and one of the group's main recruiters is now facing criminal charges, If convicted on all counts, he faces as many as 60 years in prison in the United States.

Speaking to RNZ's Sunday Morning, Thorpe described Patrik Mathews - the man he would go on to expose - as someone you "wouldn't look twice at" if you saw him on the street.

He discovered the neo-Nazi organisation, The Base, after the group put posters up around the city of Winnipeg looking for recruits. Within a couple of hours of hearing about them, Thorpe - who was only a couple of years out of journalism school - had decided to go undercover to infiltrate the group.

"It quickly became apparent to me that this was a far more serious and far more violent group than anything we'd seen in Winnepeg previously," he said.

"Certainly we've had your run-of-the-mill groups of racists who've tried to organise here, but never anything so extreme and violent - and quite frankly, terroristic."

Realising the seriousness of the situation, he knew that approaching it like a straight news story wasn't going to suffice.

While advertising for recruits directly might seem like a risky move, Thorpe said it signalled their intentions to spread their ideas outside of the internet.

"Their stated goal is to try and establish two or three-man cells in as many regions as possible," he said.

"They certainly tried to recruit online, but this is a group that's very clear about its intentions not to remain online and to push things into the real world. They're not content to be 'keyboard warriors'."

After Thorpe received approval from his editors to reach out to the group via email, he did so and received a questionnaire in response, which asked about things like military experience and firearms training.

Once he had exchanged several emails with the leader of The Base - who went by the pseudonym 'Roman Wolf' - he was invited to download the encrypted messaging app Wire, which the group used to communicate, and he was later selected for a voice call interview.

When it was time for his phone interview, he spoke to Roman Wolf for about an hour, with six to eight other members listening in. The next day, he was informed that he had done well and was invited to meet a local recruiter in person.

This recruiter would turn out to be Patrik Mathews, a longtime member of the Canadian army reserve, who had trained as a combat engineer and worked with explosives.

Meeting a member of The Base in person was scary, Thorpe said.

"It was certainly a moment where it sank in exactly what I was doing there, things were getting very real very quickly.

"That very first meeting, I came away from it extremely concerned. Very quickly after we established a rapport he began talking about how I needed to get firearms so we could commence paramilitary training together.

"He discussed the possibility of derailing a train, he talked about committing violence against anti-fascist activists, he told me he was a member of the Canadian armed forces trained as a combat engineer."

While he wasn't sure if he was being told the truth, Thorpe knew that he had to find out whether he was who he claimed to be.

As Thorpe had "no intentions of running into the bush with guns and a neo-Nazi", he knew his time with the organisation would be limited - so he focused on collecting enough biographical details to find the recruiter's real identity.

Mathews flees to US

His first feature article about the infiltration was published on August 16, 2019, a Friday. Over the weekend, Thorpe made contact with a source in the Canadian armed forces and by the following Monday, Mathews' true identity was revealed in the paper.

His home was raided by local police, firearms were seized and Mathews was taken into custody, but released without charge. A week later, his truck was found at the US-Canada border and nothing was heard from him until January, when Thorpe learned he had been taken into custody in Delaware following an FBI investigation.

He had been picked up by two other members of The Base in Michigan and had travelled between several states, Thorpe said.

"While in Georgia, he is alleged to have helped hatch a plot to murder a married couple that these neo-Nazis had identified as anti-fascist activists," he said.

"Eventually he goes back to Delaware where he's living in an apartment and over the course of a month, the FBI alleges that he and one of his co-accuseds purchased a number of firearms parts and manufactured a fully automatic assault rifle."

They also found a stockpile of more than 1650 rounds of ammunition and body armour and discovered some disturbing plans.

"They had begun planning to drive down to a pro-gun rights rally in Richmond, Virginia that was held on January 20 to open up fire on the crowds from multiple locations, they had talked about engaging in targeted assassinations of law enforcement."

According to Thorpe, Mathews also recorded a number of videos while on the run - in one, he discussed the journalist by name and said he deserved the death penality for what he had done. They would eventually come face-to-face at Mathews' court hearing, which he described as "an intense moment".

"As he's walking into the defendant's seat his head is on a bit of a swivel and he's kind of scanning the faces in the room and then he sees me. And it's quite clear to me that there's an immediate sense of recognition there and his eyes just narrowed to slits and he began staring me down."

Despite threats to his safety, Thorpe said it was important for journalists to cover organisations like The Base.

"These kinds of organisations try to scare journalists so that they don't cover them and that's not how things work in liberal democratic societies.

"So it's the job of journalists to keep an eye on these folks and to not back down when threatened by various bullies."