Europe's audacious Solar Orbiter probe has lifted off on its quest to study the Sun from close quarters. 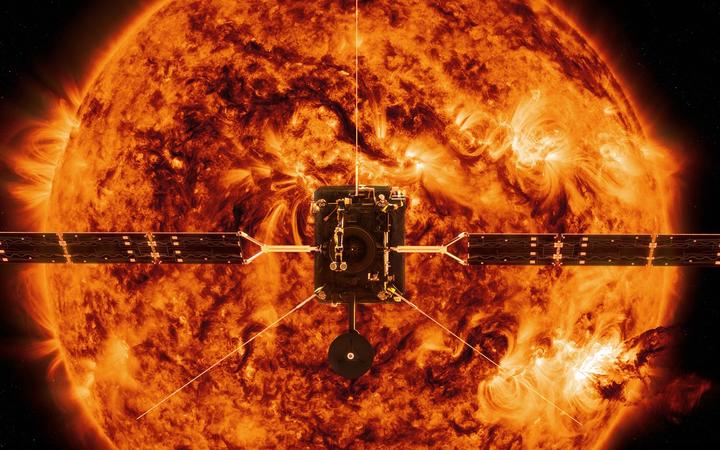 An illustration of what the Solar Orbiter will look like in space. Photo: AFP/NASA

The €1.5bn ($NZ2.6bn) mission is packed with cameras and sensors that should reveal remarkable new insights on the workings of our star.

Scientists want to better understand what drives its dynamic behaviour.

The spacecraft launched aboard an Atlas rocket, which lifted off from Cape Canaveral in Florida at 11pm local time on Sunday.

The Sun will occasionally eject billions of tonnes of matter and entangled magnetic fields that can disrupt activity on Earth.

The worst of these storms will trip the electronics on satellites, interfere with radio communications and even knock over power grids.

Researchers hope the knowledge gained from Solar Orbiter (SolO) will improve the models used to forecast the worst of the outbursts.

The probe is a flagship venture of the European Space Agency (Esa), but with the participation of its US counterpart, Nasa.

And it's the Americans who've taken on the responsibility for launching SolO.

SolO will be put on a path that takes it periodically to within 42 million km of the Sun's surface. That's closer in than the planet Mercury where the temperatures are searing.

To survive, the probe will have to work from behind a large titanium shield.

Pictures will be snapped through peepholes that must be closed after a data-gathering session to prevent internal components from melting.

"We've had to develop lots of new technologies in order to make sure that the spacecraft can survive temperatures of up to 600C," said Dr Michelle Sprake, a systems engineer with European aerospace manufacturer Airbus.

"One of the coatings that makes sure the spacecraft doesn't get too hot is actually made out of baked animal bones," she said.

SolO has six imagers and four in-situ instruments. The latter will sample the excited gas (plasma) and magnetic fields as they race away from our star and flow over the spacecraft.

"Solar Orbiter is all about the connection between what happens on the Sun and what happens in space," explained Prof Tim Horbury from Imperial College London.

"We need to go close to the Sun to look at a source region, then measure the particles and fields that come out from it. It's this combination, plus the unique orbit, that makes Solar Orbiter so powerful in studying how the Sun works and affects the Solar System."

That unique orbit will lift SolO out of the plane of the planets to look down on the Sun's poles.

"We don't yet have a detailed understanding of why the Sun has an 11-year cycle over which activity rises and falls," said Prof Lucie Green from University College London.

What the researchers will see, they cannot say for sure. But the expectation is that SolO will detect signals of when the Sun's activity is about to change.

"We believe we will see indications of the next cycle early on in the polar regions," speculated Esa project scientist Dr Daniel Müller. "These are small concentrations of magnetic field."

This decade is expected to be a golden one for advances in solar physics.

SolO's launch follows hot on the heels of the Americans' Parker probe, which shares many of the same scientific goals and even some of the same kinds of instruments.

And here on Earth, an astounding new 4m telescope has just opened on Hawaii. Called the Daniel K Inouye Solar Telescope (DKIST), this facility can resolve details on the Sun's surface that are a mere 30km across.

"SolO sits in this family of missions studying the inner Solar System. I regard it as a kind of orchestra. Every instrument plays a different tune but together they play the symphony of the Sun," said Prof Günther Hasinger, Esa's director of science.