One of the more unlikely films competing in this weekend's Oscars is a fascinating story about a wild beekeeper in the Balkans. Honeyland has a strong ecological message, but it's the life story of the woman at the centre of the film that has struck a chord around the world. 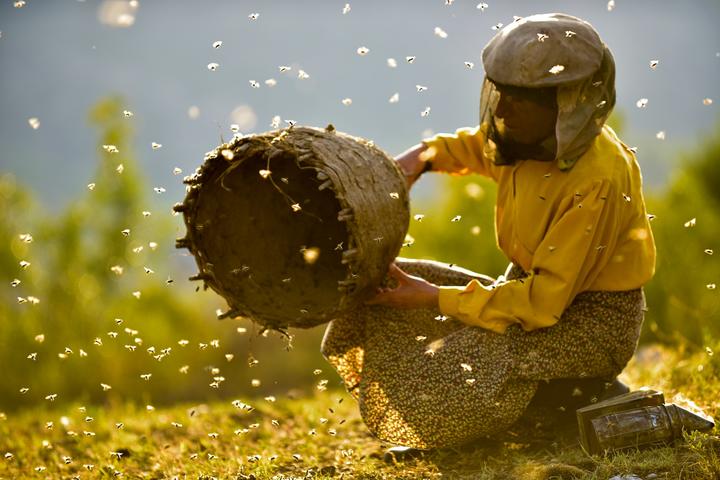 Honeyland is the first film to compete for both the best documentary award and best international feature film. The documentary's success is even more remarkable because it started almost accidentally.

North Macedonian directors Tamara Kotevska and Ljubo Stefanov were researching in a remote mountainous area of the country for a short nature documentary. They noticed beehives behind a rock on the mountain where they were filming. This led them to one of Europe's last wild beekeepers, Hatidze Muratova, who uses ancient methods passed down through the generations for harvesting wild honey.

This was the beginning of a "crazy adventure" of three years, filming through scorching summers and freezing winters. After another year editing, their first feature film was born.

Honeyland chronicles a period of Muratova's life when her ancient methods of beekeeping came up against, and conflicted with, those of a newcomer to her remote home region of North Macedonia.

The directors say the film profoundly changed their lives. Honeyland has much to say about conserving nature, but its lessons are also about human life and relationships.

"Half for me and half for you" is Muratova's mantra, which she repeats as she tends to the bees on the mountain. But it's a message which is in danger of being lost in the modern world.

Muratova lives in Bekirlija, an abandoned village with no electricity, running water or roads, where she looks after her ailing mother.

The honey she sells at the market in the capital Skopje is her sole source of income. She takes only half of the honey, leaving the rest for the bees.

She lives by that simple principle. "Sharing with bees and with nature is the key to her survival," says Stefanov.

But her quiet existence is fundamentally changed when the nomadic Sam family, consisting of parents with seven unruly children, a noisy vehicle and a large herd of cattle, moves into the village.

When the Sam family arrives, she welcomes them with an open heart, and teaches them how to harvest the wild honey.

However, Hussein, the father of the family, wants to harvest honey on a larger scale and for more profit. He takes all the honey from his own hives, but his bees respond to this by attacking Muratova's hives, leading to their destruction, and a conflict between the human neighbours.

Kotevska says that the directors do not want to portray the Sam family as symbols of destruction, but merely as "the mirror to all of us who make bad decisions", based on the need to survive and provide.

Wisdom can be more powerful than force

"To be able to communicate with bees you need to have a personal strength to approach them, patience to learn how to tame them, and this way of life requires not force but wisdom," says Kotevska.

She says that beekeeping has made Muratova such a remarkable person. 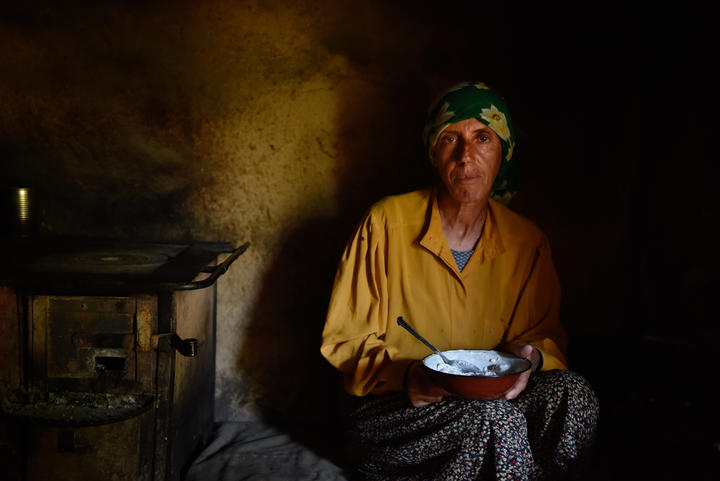 Muratova gets very close to the bees, often using no protection. She does not get stung, the bees seem to trust her.

"Everything we've heard from [Muratova] refers to bees. She has been working with the bees all her life and everything she has learned, she learned from them."

The directors say that wild beekeeping was something that only a few people in the region learned how to do. It was never the main source of income for the villagers, but the families passed it down through generations.

In Muratova's family, learning the skill skipped a generation - she learned it as a girl from her grandfather, rather than her parents.

You can be alone but not lonely

In one scene of the film, Muratova asks her mother why she turned down offers of marriage that were brought for Muratova. Her mother, Nazife, says she did not turn them down, but Muratova's late father did.

Stefanov says that in the traditional communities in that part of the world, regardless of the religion or ethnicity, "there is an unwritten rule that the last-born female child stays with the parents until their death".

"So, [her] destiny was to stay and take care of her parents."

But Muratova was longing for her own family. In the film, she develops a special bond with one of the Sam boys.

"The love that she was keeping for a family of her own, that never came true, eventually went to the bees," says Kotevska.

"She finds happiness and companionship in every living creature around her. She will continue to find happiness again and again as long as she lives." 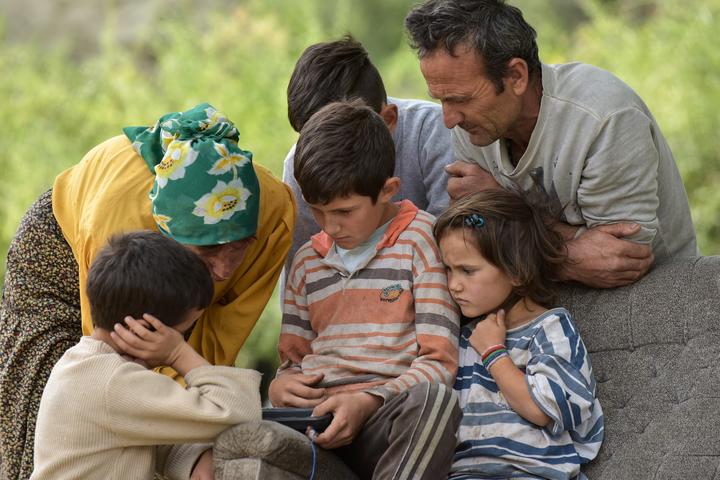 Hatidze Muratova with members of the Sam family, including Hussein (right). Photo: NEON

Honeyland is a film set in a remote land, where the people live in ways unfamiliar in the West. But it has still connected with a worldwide audience through the protagonists' body language, relationships and emotions.

Both the Sams and Muratova's family are ethnic Turks and they speak in Turkish dialect throughout the film.

In the past, there were about 10 Turkish villages in the area, Stefanov says, but most villagers left for Turkey after World War Two.

Today, about 78,000 ethnic Turks still live in North Macedonia, making up just under 4 per cent of the country's population of 2.1 million.

"Not understanding Turkish was a problem during the shooting, but we decided to let them speak as they naturally would," says Kotevska.

"When we came to editing, we spent a week or more just being completely stuck. We spent hours just thinking what to do with this material. In the end we came up with the best possible solution and that's to edit on mute. This gave us the power of the visual story that we made.

"This was the most valuable lesson for us as the authors of the future films. We are now very trained to see the stories that are created visually."

Kotevska says there were many other disadvantages from the beginning of the shooting but most of them ended up working out well.

"They make you extremely creative, we thought of the solutions that turned out to be quite unique."

Bees and humans are similar

Muratova says her bees are uniquely resilient and can survive very high and very low temperature, unlike many other species. The film shows that to be true of the people living in the region too.

But the similarities between people and bees do not stop there.

What caught the directors' interest early on was observing Muratovas life and her relationship with her mother. Kotevska says they were struck by how similar Muratova was to a worker bee and how her mother resembled the queen bee. In the film, Nazife never leaves the house, but her wisdom guides her daughter at the time of crisis.

"The Sam family that comes later are the other group of bees who are attacking the previous group of bees. We really enjoyed making this comparison during the shooting," Kotevska said. 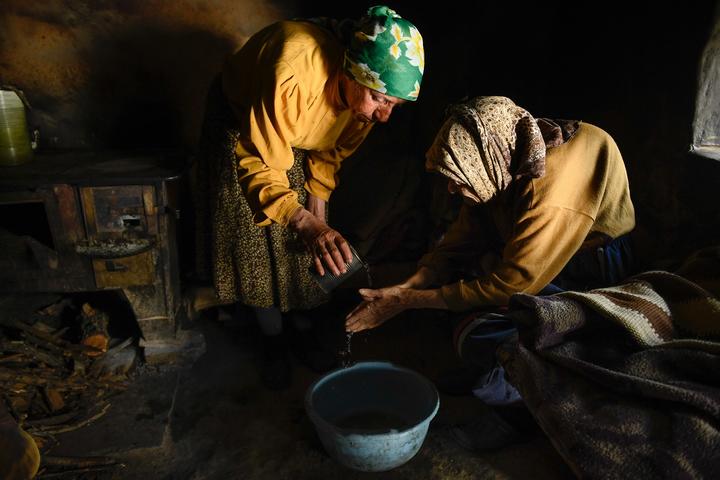 Kotevska is one of only a handful of female directors to be nominated for an Oscar this year.

She says that many people assume that she, as a woman, was the one who was closer to Muratova , and Stefanov with the boys from the other family. In fact it was the other way round.

"It's important who we were as people, our personalities, this was crucial. Gender shouldn't be the topic of discussion."

Muratova has travelled to Hollywood for the Oscars ceremony, and she has also been to several other film festivals, in places as far apart as New York, Switzerland, Sarajevo and Turkey.

The film has already enabled Kotevska and Stefanov to buy Muratova a house in another village, close to her brother's family. Nevertheless she still spends the bee season in her old village.

The untouched nature of Muratova's home couldn't be further away from the glitz and glamour of film festivals. Kotevska says her main impression of Los Angeles is: "From the tall buildings, I cannot see the stars."