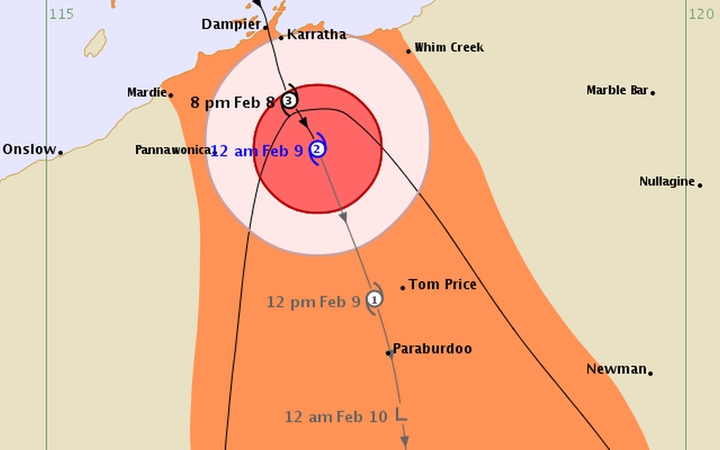 Cyclone Damien was last night downgraded to a category two system after it moved inland.

Residents in the affected area were being told to remain indoors but the red alert was expected to be lifted later today.

Will Blackshaw from the Department of Fire and Emergency Services said damage inspections would begin at first light local time, before giving the all clear.

"There have been over 100 calls for assistance already," he said.

"I'm expecting that will increase significantly once people are able to get outside and have a look at what that damage is. We are seeing some calls for some significant damage."

A red alert remains in place for areas in the Pilbara region being hit by severe, destructive winds, torrential rainfall and storm surges.

Rain and gale-force winds pummelled a stretch of coast close to Dampier and not far form Karratha, which is home to about 16,000 people.

The Bureau of Meteorology (BOM) said Karratha and Dampier were hit with the brunt of the cyclone as the eye wall crossed over the communities.

Overnight, the Department of Fire and Emergency Services (DFES)' Matt Folini said the storm was tracking as expected, but it would be a while before the red alert was lifted.

"We definitely are getting no decrease in its current tracking," he said.

"Just to keep everyone safe, we would envision that we are looking at having that red alert overnight and into the early morning."

Folini said there had been callouts for help but no major damage reported.

"We haven't had any major reports of any critical infrastructure or any major building loss from the area," he said.

Residents urged not to be complacent

BOM's Neil Bennett cautioned people to not be complacent as the eye passed over the area.

"It's still a very powerful system after the eye goes through," he said.

"It [the wind] drops off really, really quickly because the eye passes over you … but they pick up at the other end … it is a very rapid increase in wind speed."

The eye could take three or four hours to pass.

The strongest wind gusts recorded so far have been up to 205kph.

Karratha has received more than 140mm of rain in the past 24 hours, but forecasts are for between 250mm and 400mm in some areas.

DFES crews were expected to be on the ground to assess the damage by first light on Sunday.

In Dampier and Whim Creek, tides were expected to rise significantly above the normal high tide mark.

Residents were also warned about the risks of storm surge, depending on the timing of the system and the position of the tide.

Damien is the first severe cyclone to cross the Karratha and Port Hedland area since Cyclone Christine in late December 2013.

The long-term Karratha resident has been through many cyclones during his 35 years in the city, with the strongest, category five cyclone Orson, hitting in 1989.

"That was very scary, it was a very strong cyclone," he said.

City of Karratha councillor Margaret Bertling said the calm as the eye of the storm passed over had given her an opportunity to look out her windows and assess the damage.

"It's just not nice"

"There are a lot of branches and leaves flying about the place," he said.