Pressure has grown for former National Security Adviser John Bolton to testify in the US President Donald Trump's impeachment trial. 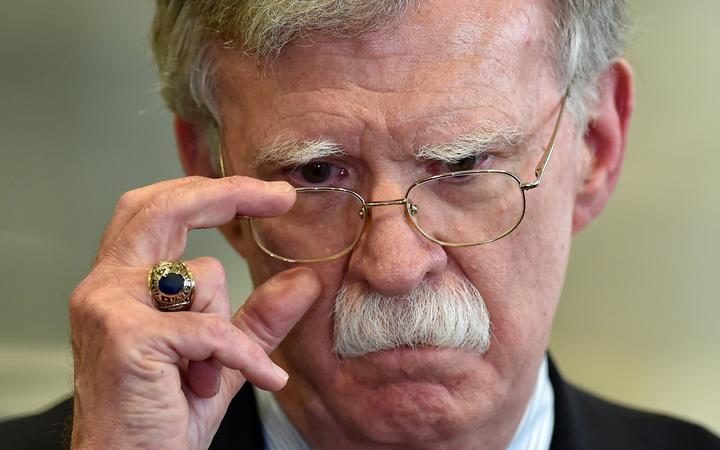 Calls for his testimony come amid claims that the adviser directly linked Trump to a plan to freeze aid to Ukraine in exchange for a political favour.

The claims, reportedly made in a book manuscript, are central to the trial due to resume on Monday.

But the claims allegedly made by Bolton could damage the president's defence.

The president is alleged to have withheld military aid to pressure Ukrainian President Volodymyr Zelensky into starting a corruption investigation into Biden, and his son Hunter.

The president has repeatedly branded the impeachment proceedings a "witch hunt".

However, some Republicans have now said Bolton should be heard from.

What do the new reports allege?

On Sunday, the New York Times cited excerpts from an unpublished book by Bolton, who was fired from the White House in early September.

They included claims that Trump told Mr Bolton in August that he wanted to withhold $391 million security aid to Ukraine until officials there assisted with probes into Democrats, including Biden.

If true, such a claim would undermine the main argument of Mr Trump's defence team that there was no "quid pro quo" which offered aid in return for investigating Biden.

"Bolton directly contradicts the heart of the President's defence," tweeted Democratic congressman Adam Schiff, who serves as the senior House prosecutor in the impeachment trial.

"If the trial is to be fair, Senators must insist that Mr Bolton be called as a witness, and provide his notes and other documents."

What has been the reaction to the latest revelations?

Interest for Bolton to testify grew following the New York Times report. Republican Senator Mitt Romney said: "I think it's increasingly likely that other Republicans will join those of us who think we should hear from John Bolton."

Susan Collins, a centrist Republican from Maine, tweeted: "The reports from John Bolton's book strengthen the case for witnesses".

Doug Jones, a Democratic senator from Alabama, said the body should issue a subpoena for the manuscript if Bolton could not be brought to testify.

House Speaker Nancy Pelosi said that Republicans' refusal to call Bolton and others is "now even more indefensible".

But Trump denied the claim, writing on Twitter: "I NEVER told John Bolton that the aid to Ukraine was tied to investigations into Democrats, including the Bidens.

"In fact, he never complained about this at the time of his very public termination. If John Bolton said this, it was only to sell a book." Bolton served as National Security Adviser to Trump from April 2018 to September 2019, when his departure was announced on Twitter.

Bolton's lawyers said the book's "pre-publication review process has been corrupted and that information has been disclosed by persons other than those properly involved in reviewing the manuscript".

They blamed the White House for the leak, which had received a copy to review it for any disclosure of classified information.

The latest reports come after a video made public on Saturday showed Trump ordering the removal of the US ambassador to Ukraine in 2018.

He is the third president in US history to face an impeachment trial.