An emergency-level fire near the Canberra suburb of Beard has forced the Canberra Airport to cancel all incoming and outgoing flights. 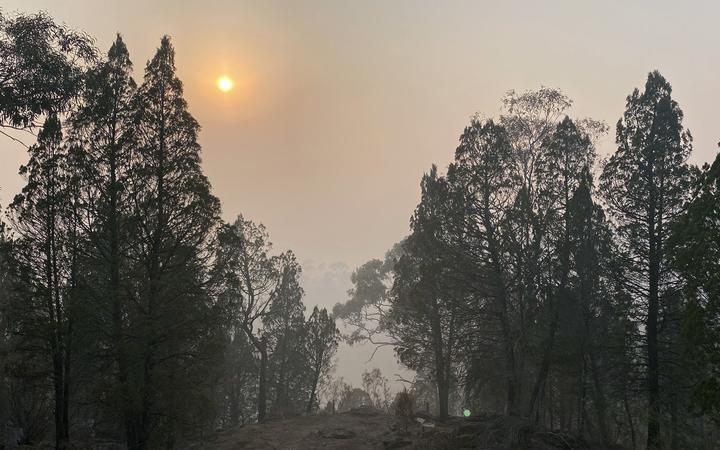 Flights to and from the Canberra Airport have been cancelled. Photo: AFP

The fire, which began yesterday in Redwood Forest in Pialligo, jumped the Molonglo River and is approaching Beard, Harman, Oaks Estate and West Queanbeyan including Crestwood.

It has also merged with a second fire on Kallaroo Rd, which began in the same suburb of Pialligo this morning. The combined fire is now called the Beard fire and is at an emergency level.

Flights to and from the Canberra Airport have been cancelled. In a tweet the airport said it had not been evacuated, but advised people to contact their airline for updated information.

The ESA has advised that people at Brindabella Business Park, near the Canberra Airport, are safe where they are, and should monitor changing conditions.

The ACT Emergency Services Agency (ESA) has advised that people in the immediate area "are in danger and need to seek immediate shelter as the fire approaches".

"It is too late to leave if people are in the area."

"The fire is out of control."

The ESA advised that people in the streets north of Uriarra Road should leave now towards David Campese Oval in Queanbeyan if it is safe to do so.

The recycling centre in Underwood Street, Beard was impacted by the Beard fire and is producing dangerous levels of smoke, which will reduce visibility and air quality.

People who are not in the area have been advised not to return. Those seeking shelter in the area should stay inside, close all windows and doors and turn off air conditioning and evaporative coolers.

The fire started yesterday afternoon and flared up in fierce winds before merging with a second fire in Pialligo just after 2pm.

A 737 water bomber from the Richmond RAAF base is assisting with firefighting efforts.

A relief centre has been established at Dickson College for people from the fire affected-areas. It is accessible for people with disabilities and is also receiving domestic pets.

There are also currently four bushfires burning at emergency level in New South Wales, including a fire at Eurobodalla's Clyde Mountain.