Taiwan's President Tsai Ing-wen has secured a second term after sweeping to victory in an election dominated by the island's relationship with China. 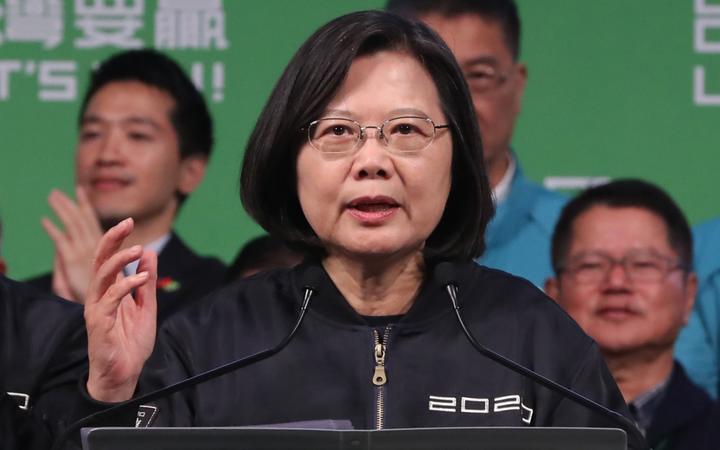 Tsai secured just over 57 percent of the ballot - a record 8.2m votes - well ahead of her rival Han Kuo-yu.

In her victory speech, Tsai told China to abandon its threat to take back the island by force.

China has claimed sovereignty over Taiwan since the end of the Chinese civil war in 1949. It says Taiwan must eventually be reunited with China, by force if necessary.

"Peace means that China must abandon threats of force against Taiwan," she said in the capital Taipei.

"I also hope that the Beijing authorities understand that democratic Taiwan, and our democratically elected government, will not concede to threats and intimidation."

The US hailed President Tsai's victory as a demonstration of Taiwan's "robust democratic system".

"Under her leadership we hope Taiwan will continue to serve as a shining example for countries that strive for democracy, prosperity and a better path for their people," the US State Department said.

"I have called President Tsai to congratulate her. She has a new mandate for the next four years," he told a crowd in the southern city of Kaohsiung.

Ahead of the vote, Tsai was leading in the polls as voters watched the way in which Beijing handled pro-democracy protests in Hong Kong.

Her stance was popular with those who feared Taiwan being overtaken by mainland China. In the final count she secured 1.3m more votes than in her 2016 victory.

President Tsai insisted Taiwan's future should be decided by its 23 million people.

Voters were also choosing the next members of the Taiwanese legislature, where Ms Tsai's Democratic Progressive Party (DPP) has had a majority.

For practical purposes, Taiwan is an independent state - it has its own elected government, constitution and military - but China refuses to have diplomatic relations with any country that recognises Taiwan as a sovereign nation.

All but a handful of countries have picked Beijing, but most maintain an ambiguous relationship with Taiwan through trade. The US is also legally bound to supply Taiwan with the means to defend itself.

According to her website, Tsai wants to "maintain the existing mechanisms", meaning she does not want to compromise Taiwan's de facto independence.

In a speech on the Hong Kong protests in June, she said "anyone who tries to undermine Taiwan's sovereignty and democracy, or use them as political bargaining chips, will fail".

She had also rejected Taiwan ever operating under the "one country, two systems" political system used in Hong Kong since it returned to China in 1997 - calling it "not viable".

Speaking to the BBC this week, she said Taiwan should "learn a lesson" from Hong Kong: "If we don't insist [on maintaining Taiwan's independence], we'll be losing everything we have now."

Han and his party the Kuomintang (KMT) favour closer ties with China - which they say will bring economic growth - but do not seek unification.

The KMT once ruled China, before fleeing to Taiwan in 1949 after losing to the communist forces in the civil war.

Han made a high-profile visit to Hong Kong and China in March, and has reportedly said a formal declaration of Taiwanese independence would be "scarier than syphilis".

Although the economy has grown during Ms Tsai's presidency, exports have fallen and wage growth is sluggish.

Saturday's presidential election was also the first since Taiwan became the first place in Asia to legalise same-sex marriage.

The move was rejected in a series of referendums, but parliament passed a special law in order to comply with an earlier court ruling.

Tsai said it was "a big step towards true equality".