The Queen has asked staff to work with the Duke and Duchess of Sussex to find a workable solution after the couple announced they will step back as senior royals. 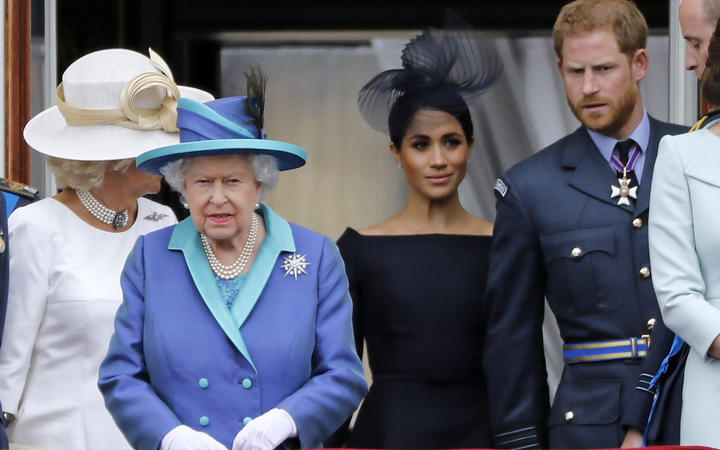 BBC royal correspondent Nicholas Witchell said Her Majesty had been in touch with the Prince of Wales and the Duke of Cambridge on Thursday local time.

They directed senior staff to work with the Sussex household and government.

It comes as the Royal Family was said to be "hurt" at the couple's statement.

Prince Harry and Meghan did not consult any other royal about making their personal statement, palace sources have told BBC royal correspondent Jonny Dymond.

In their announcement yesterday, Prince Harry and Meghan revealed they intend "to step back as 'senior' members of the Royal Family, and work to become financially independent".

They plan to split their time between the UK and North America, while "continuing to honour our duty to the Queen, the Commonwealth, and our patronages".

The decision came "after many months of reflection and internal discussions", they added.

Buckingham Palace was "blindsided" by the couple's statement, said Dymond.

There had been talks within the Royal Family about the Sussexes' future - but they were at an early stage, he said.

In a statement yesterday, Buckingham Palace said: "We understand their desire to take a different approach, but these are complicated issues that will take time to work through."

Despite the couple's decision, Harry will remain sixth in line to the throne.

Over Christmas, the couple took a six-week break from royal duties to spend some time in Canada with their son, Archie, who was born in May.

After returning to the UK on Tuesday, Harry, 35, and Meghan, 38, visited Canada's High Commission in London to thank the country for hosting them and said the warmth and hospitality they received was "unbelievable".

Former actress Meghan, who is American, lived and worked in Toronto during her time starring in the popular US drama Suits, and she has several Canadian friends.

The pair was already preparing to launch their own Sussex Royal charity, which they set up after splitting from the Duke and Duchess of Cambridge's foundation in June last year.

The Sussexes' new charity is expected to be global, linked to Africa and the US, rather than domestic - and will have a commitment to female empowerment.

It was revealed in December the couple had made an application to trademark their Sussex Royal brand across a string of items including books, calendars, clothing, charitable fundraising, education and social care services.

In stepping back as senior royals, Harry and Meghan have announced they will no longer receive funding from the Sovereign Grant.

The Sovereign Grant is public money - £82m in 2018-19 - which pays for the cost of official royal duties, in exchange for the surrender by the Queen of the revenue from the Crown Estate.

The couple said the Sovereign Grant paid for 5 percent of their official office from 2019, with the remaining 95 percent being funded by Prince Charles through his income from the Duchy of Cornwall.

The couple are classified as "internationally protected people", which means they must have armed security provided by the Metropolitan Police.

They will retain Frogmore cottage, the Grade-2 listed property in Windsor that cost taxpayers £2.4m to renovate, as their official residence so they have a "place to call home" in the UK.

Reaction to the couple's announcement from royal commentators has been mixed, with numerous questions over what their future royal roles will entail.

Bryony Gordon, a Daily Telegraph journalist who knows and has interviewed the couple, suggested their decision could be linked to their mental health, after becoming a "punching bag" for a "misogynistic and racist" nation.

Graham Smith, a spokesman for Republic, which campaigns for an elected head of state, said Harry and Meghan's decision "raises questions about the monarchy's future" and will prompt taxpayers to ask how the couple's extra security and overseas lifestyle will be funded.

"This really is wanting to have your cake and eat it," he said. "They have said they will dip in and out of royal duties as it suits them but won't stop taking public money until they find other sources of income."

Meanwhile, Justice Secretary Robert Buckland said "we must continue to celebrate and support" the contribution the Royal Family makes to the UK, adding that it has an "important role in public service".

In October last year, Meghan began legal action against the Mail on Sunday over a claim that it unlawfully published one of her private letters. The paper stands by its story.

At the time, Prince Harry said: "Though we have continued to put on a brave face... I cannot begin to describe how painful it has been."

And in an ITV documentary last year, Meghan, who was born in the US, described motherhood as a "struggle" due to intense interest from newspapers.

On Wednesday the royal couple also announced they would also be adopting a "revised media approach" from the spring.

It will see them "engage with grassroots media organisations and young, up-and-coming journalists".

The National Union of Journalists criticised the plans, saying the move appears to try and "prevent the media from functioning and compromising the ability of journalists to do their jobs, which is completely unacceptable".