Seventeen people are missing from Victorian communities after bushfires tore through the region, the state's Premier says. 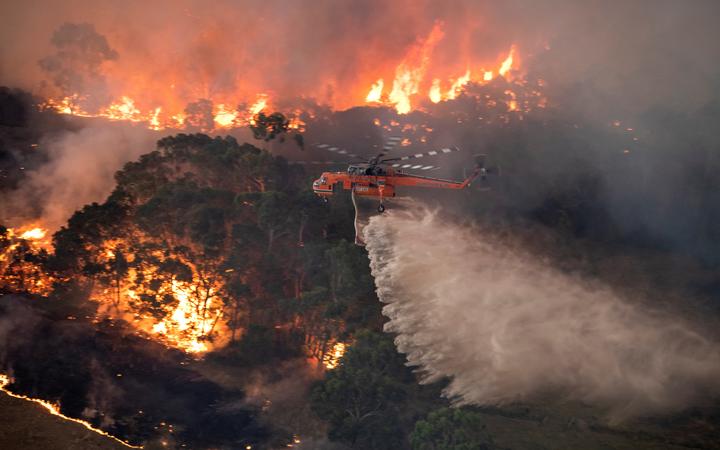 A helicopter fighting a bushfire near Bairnsdale in Victoria's East Gippsland region on 31 December, 2019. Photo: State Government of Victoria / AFP

Daniel Andrews said 24 Victorian communities were now isolated by bushfires and rescue crews were battling to clear roads to reach them so they could evacuate before the risk increased this weekend.

"I'm very sad to have to report that there are at least 17 people at this stage that we can't account for, whose whereabouts are unknown to us, plus there is one person confirmed as deceased," Andrews told reporters this afternoon.

He said while Victoria Police had not been through the official identification process for a body found at Buchan, family had identified him as 67-year-old Mick Roberts.

"We send our deepest condolences to their family and the Buchan community to whom he was so well known and very highly regarded," he said.

A road has been being cleared so rescue crews can get into Cann River, a day after the community took shelter in a school as the bushfire that devastated Mallacoota bore down on the town.

Locals told the ABC they were comforted by the arrival of a CFA strike team today, which has begun to escort residents out to the larger town of Orbost in a convoy.

Authorities are trying to help evacuate anyone who wants to leave the town before the fire danger rises with more hot and windy weather on the weekend.

Meanwhile, some of the 4000 people trapped in the coastal town of Mallacoota are waiting to be evacuated by a Navy ship that arrived this morning.

Excuse the language but conditions are shithouse off the coast of Mallacoota. HMAS Choules barely visible as CO Scott Houlihan leads a liaison team to meet with community leaders in town. Hoping to get people on board this arvo. #TYFYS @DeptDefence @CDF_Aust #lovegippsland pic.twitter.com/a5KmoD0rOA

Earlier today, authorities urged people in East Gippsland to get out of the region if possible before the weekend's dangerous weather hits.

"Every community that is lying to the south and south-east of the Bairnsdale complex of fires is under threat," Deputy Emergency Management Commissioner Chris Stephenson said.

"We'll offer the opportunity to get as many people out as we can into a more comfortable place; however, logistically that's quite a challenge."

Authorities fear the hot and windy conditions could cause massive blazes at Corryong and across the border in New South Wales to "suck each other in" and merge into one giant fire.

A series of fires started in the Alpine region by lightning strikes could also pose a serious threat to nearby towns including Harrietville, Wandiligong and Bright.