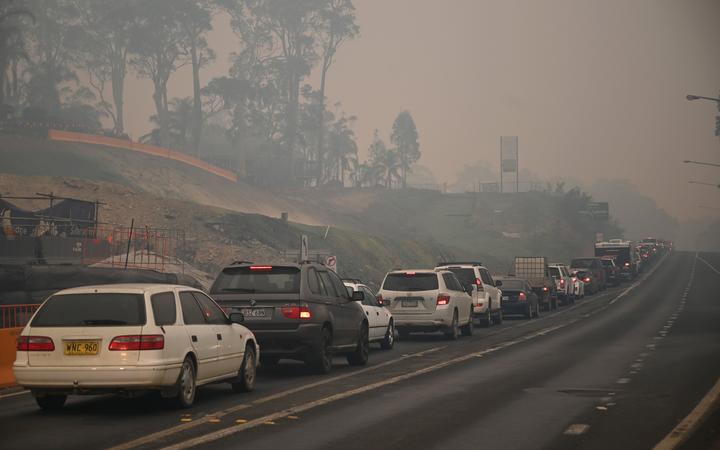 Cars line up to leave the town of Batemans Bay in New South Wales to head north. Photo: AFP

A so-called Tourist Leave Zone has been declared for the more than 180km-area stretching between Batemans Bay and the edge of Victoria's northern border.

As of 5.30am local time 110 fires were burning across NSW with over 50 yet to be contained, the RFS said.

It is also warning those planning on heading to popular holiday spots in the area to stay away because it won't be safe.

Dangerous conditions are predicted for the weekend, possibly the same as - or worse than - those on New Year's Eve, when a firestorm devastated villages and major centres.

The RFS said tourists needed to leave before Saturday.

With the widespread power and communications outages across the South Coast please share this information to as many affected people as possible. #nswrfs pic.twitter.com/JvbwrpC1fe

Transport and emergency services have reopened major highways leading out of the leave zone, including the Princes Highway between Milton and Nowra.

The major highway between Falls Creek at Jervis Bay Road and Corks Lane at Milton is also open, but under a reduced speed limit.

But evacuees were struggling to find fuel - long queues were seen stretching out from petrol stations around Batemans Bay.

"We're trying to get out of here as the authorities want us to leave," said holidaymaker Tracey Feeney.

"So we're just waiting for all their garages to open up, they've apparently got no power still."

The NSW Transport Minister and Bega MP Andrew Constance said tankers carrying up to 60,000 litres of fuel were brought in overnight.

"Obviously there is a limit ... so people need to gauge their fuel," he said.

"You can't leave on an empty tank, because the power is off in a lot of places. We need people to be well-planned."

It comes as the RFS revealed 382 homes were destroyed by the South Coast fires, believed to have started on New Year's Eve.

It brings the total number of homes lost this bushfire season to 1298.

RFS Deputy Commissioner Rob Rogers said the destruction was going to get a lot worse.

"The unfortunate part of this is that that's not the end of it," he said.

"There are more homes that are lost and crews will be out again today trying to account for all of those so we can give residents surety on what's happened to their particular homes."

Firefighters will make the most of more favourable conditions today to protect properties before deteriorating conditions again this Saturday.#NSWRFS #NSWFires pic.twitter.com/vb3o55n8XU

In the past week, the blazes have already killed seven people and destroyed 176 homes.

A father and son died in Cobargo on Wednesday, it is thought while defending their property, and volunteer firefighter Samuel McPaul died after his truck flipped in Jingellic.

Another three bodies were found at Lake Conjola, and one man was found in a burnt-out car at nearby Yatte Yattah.

The Princes Highway has been opened between Milton and Nowra, allowing traffic to move between Ulladulla and Nowra at the discretion of emergency services.

The major highway between Falls Creek at Jervis Bay Rd and Corks Lane at Milton is open, but under a reduced speed limit.

Transport Minister and Bega MP Andrew Constance said the speed of the fire on New Year's Eve should be a warning to locals and visitors about the dangers of the poor fire conditions forecast for Saturday.

"I think the fire moved at a pace that no-one expected. It shot round the back of Nelligen to Runnyford, hit Mogo pretty hard and then just burned through to the beach," Constance said.

"It's devastating. But we'll pull together, great community."