Six people died and dozens were injured on Friday as Indian police clashed with thousands of protesters who again took to the streets in several parts of the country to oppose a new law they say discriminates against Muslims. 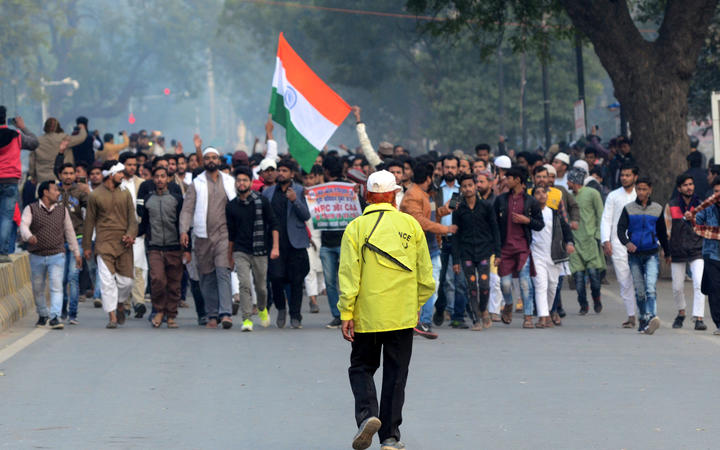 There were standoffs at police barricades in half a dozen towns in Uttar Pradesh, India's most populous state, which has long been a tinderbox of communal tensions between majority Hindus and minority Muslims.

Singh said that none of the deaths on Friday were due to police shooting, and 144 people were arrested. With the latest fatalities, the total number of deaths during the nationwide demonstrations, now in their second week, stands at 13.

The backlash against the law pushed through parliament by the Hindu nationalist government of Prime Minister Narendra Modi on Dec. 11 marks the strongest show of dissent since he was first elected in 2014.

The legislation makes it easier for people from non-Muslim minorities in Afghanistan, Bangladesh and Pakistan who settled in India prior to 2015 to obtain Indian citizenship.

Critics say the exclusion of Muslims is discriminatory and that the award of citizenship based on religion undermines the constitution. 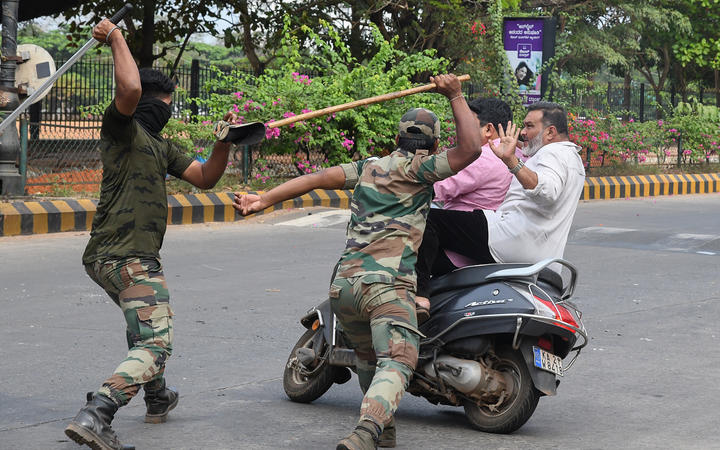 Members of the Karnataka Reserve Police Force swing their sticks to beat two men on a scooter who rode too close to a barricade set up on a street in Mangalore. Photo: AFP

In New Delhi's Daryaganj area, a commercial thoroughfare in the capital with many banks, shops and cafes, police fired a water cannon to disperse crowds of some 6,000 protesters, an official said.

Police detained 34 people in the area, said Adil Amaan, a lawyer who tried unsuccessfully to negotiate their release.

A Reuters witness saw a smouldering car that had been torched outside the Daryaganj police station, and shoes strewn across a street as dozens of policemen in riot gear kept watch.

Authorities were unable to immediately confirm the number of people injured in the clash in Daryaganj.

'WE WILL NOT BACK DOWN'

The protests in New Delhi had grown throughout the day, initially starting at the historic Jama Masjid mosque, where chants of "Remove Modi" filled the air after Friday prayers that drew thousands of worshippers.

Protesters marched toward the centre of the capital where authorities had shut some train stations and suspended the internet in some areas to stop people from gathering.

Police and paramilitary were deployed outside Jama Masjid, where several people carried India's flag and copies of the constitution, which states that India is a secular republic. 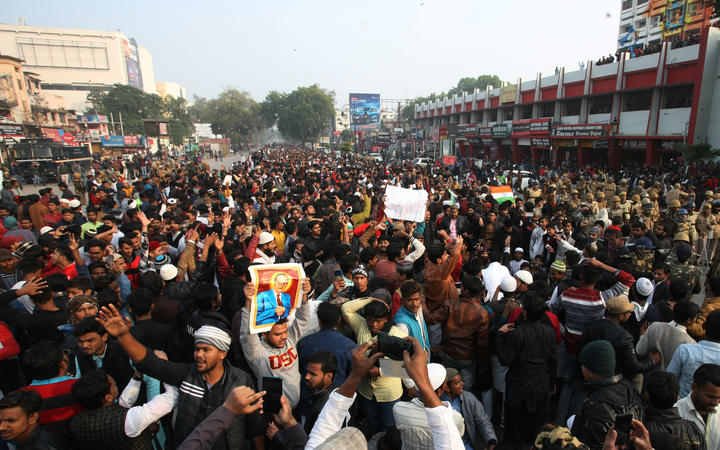 "We will fight till this law is rolled back. We will not back down," said Shamim Qureishi, 42, outside the mosque.

In north-eastern Delhi, tens of thousands gathered in three different places to protest against the law, despite curbs on such assemblies, but later dispersed peacefully, police said.

Crowds pelted stones at police in Ferozabad, Muzzafarnagar and Ghaziabad among other cities in Uttar Pradesh and police fired tear gas in the city of Kanpur to scatter protesters.

Singh, the state police chief, said that violence had been reported in 13 districts.

From college students and academics to artists and opposition party workers, thousands of people have come out to protest against a law that many believe is part of an unspoken government agenda to divide India along communal lines.

On the street below Jama Masjid, Muslims were joined by people of other faiths, including a large number of Dalits, the community that ranks at the bottom of the Hindu caste hierarchy.

Several thousand also gathered for a peaceful protest on the main boulevard cutting through Jamia Milia Islamia university in southern Delhi that has been the site of violent clashes with police in the last two weeks.

"We want justice," some of them said, condemning police action against Jamia students and the citizenship law.

"Hindus, Muslims, everyone is against this law. This is the power of unity," said 55-year old Mahroof Ahmed Khan, a resident, as he walked through the demonstration.

Aside from targeting Modi, protesters also vented their fury at Amit Shah, the interior minister who tabled the bill.