A massive protest has broken out in India's capital Delhi as anger at a citizenship law spreads across the country. 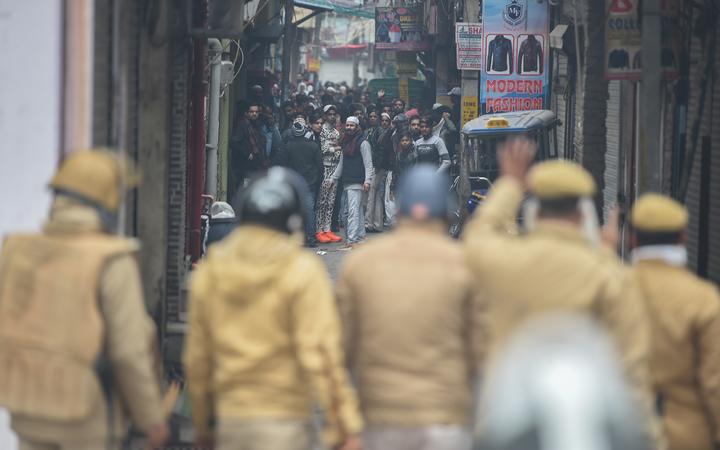 Local reports say several protesters and officers have been injured as stone-throwing crowds facing off against police officers in the city's Seelampur area and police retaliated with tear gas and batons.

The protest comes days after clashes between police and protesters in Delhi left at least 50 injured.

The new law offers citizenship to non-Muslims from three nearby countries.

Seelampur, in the east of the city, has a large Muslim population. Protesters are claiming that the act will marginalise them.

There are reports of a police station being set on fire and police have said that buses have been vandalised.

Meanwhile, the Supreme Court on Tuesday refused to hear a petition against the police action inside Delhi's Jamia Millia Islamia University, where they allegedly attacked students inside campus premises, including the library and toilets.

Chief Justice Sharad Bobde said the top court did not have to intervene since it was "a law and order problem". He also told lawyers to file petitions in trial courts.

More protests have broken out, including at Jamia Millia Islamia.

A student there told the BBC that hundreds of students had joined demonstrations for the third day in a row.

Prime Minister Narendra Modi said the new law was "for those who have faced years of persecution outside and have no place to go except India".

But some say the Citizenship Amendment Act (CAA) is discriminatory and part of a "Hindu nationalist" agenda to marginalise India's 200-million Muslim minority.

Others - particularly in border states - fear being "overrun" by new arrivals from Afghanistan, Bangladesh and Pakistan.

What is the law about?

It also expedites the path to Indian citizenship for members of six religious minority communities - Hindu, Sikh, Buddhist, Jain, Parsi and Christian - if they can prove that they are from Pakistan, Afghanistan or Bangladesh. They will now only have to live or work in India for six years - instead of 11 years - before becoming eligible to apply for citizenship.

It also says people holding Overseas Citizen of India (OCI) cards - an immigration status permitting a foreign citizen of Indian origin to live and work in India indefinitely - can lose their status if they violate local laws for major and minor offences and violations.

Opponents say the law is exclusionary, is part of an agenda to marginalise Muslims, and violates the secular principles enshrined in the constitution. They say faith cannot be made a condition of citizenship.

However, the government led by the Hindu nationalist Bharatiya Janata Party (BJP), says they are only trying to give sanctuary to people fleeing religious persecution. 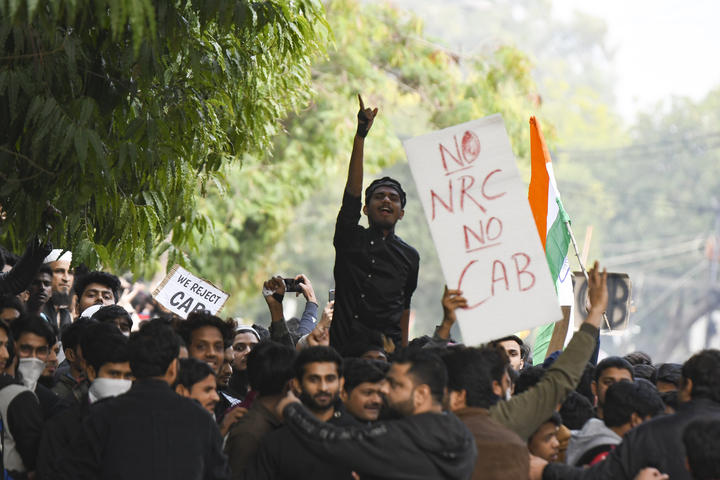 At least 50 people have been injured in three days of demonstrations. Police have denied shooting people during protests in the city. Photo: AFP / Indraneel Chowdhury / NurPhoto

The anger has spread across the country, with protests reported at more than a dozen universities.

Many of the student demonstrations were fuelled by the perceived police brutality on Sunday.

Students in Delhi, the southern city of Chennai and Varanasi in the north protested against the government and in support of their fellow students at Jamia Millia Islamia.

Footage from the northern city of Lucknow on Monday showed students throwing stones at security forces, who threw the stones back.

In Kolkata, tens of thousands of people joined a demonstration led by Chief Minister Mamata Banerjee and her ruling Trinamool Congress party, marching against the law itself.

What does the Indian government say?

On Monday, Modi sent four tweets to defend the law.

He said it was passed by both houses of parliament with "overwhelming support", and that it illustrated "India's centuries old culture of acceptance, harmony, compassion, and brotherhood".

"I want to unequivocally assure my fellow Indians that CAA [the law] does not affect any citizen of India of any religion," he added.

But Rahul Gandhi - Modi's defeated opponent in the 2019 election - said both the law and a controversial citizens' register were "weapons of mass polarisation unleashed by fascists".