Protests over a controversial new law on migrants are raging across several Indian cities, prompting police to clash with demonstrators. 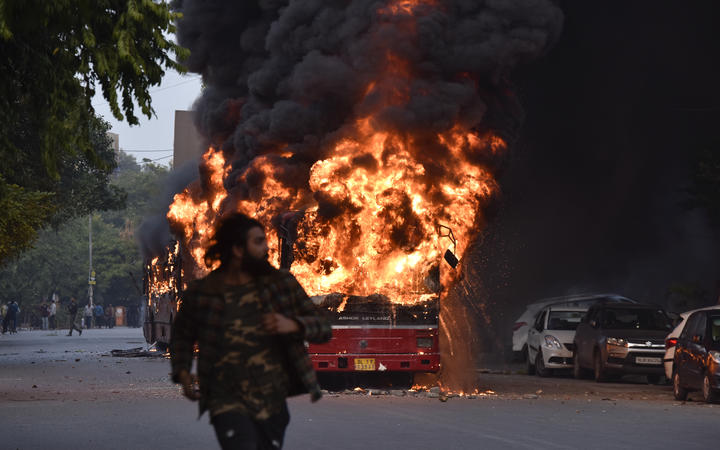 A man walks on a street as a bus is on fire following a demonstration against the Indian government's Citizenship Amendment Bill. Photo: AFP

The new law entitles non-Muslim migrants from three Muslim-majority countries to citizenship if they are facing religious persecution.

Police used tear gas and detained protesters in the capital Delhi as buses were torched and roads blocked.

Protests have raged across northern and eastern India since the law was passed.

Internet services have been shut down in several cities where protests are taking place. Universities across the country have resumed demonstrations on Monday.

Some critics say the law is anti-Muslim, while others - especially in border regions - fear large-scale migration.

Six people have been killed in the five days of unrest.

Over the weekend, demonstrators in West Bengal blocked key national highways while in Assam, the state government briefly lifted a curfew to allow people to buy essential goods.

The UK, US and Canada have issued travel warnings for people visiting India's north-east, telling their citizens to "exercise caution" if travelling to the region.

Protests resumed today in Delhi's prestigious Jamia Millia Islamia university after students held a march, which ended in clashes with the police on Sunday.

Around 35 students were detained by police on Sunday and released early on Monday morning.

It is still unclear who started the violence but stones were thrown at the police who retaliated with tear gas.

Local media reported that nearly 60 people, including students and police, were injured. At least three buses and several motorcycles were set on fire.

Students distanced themselves from the violence and some police officers privately admitted that local troublemakers were behind the trouble, the BBC's Kinjal Pandya reported.

Videos shot by students show police beating up students inside campus areas like bathrooms and the library.

Police have said that they did what was "necessary" to stop the protests.

Some schools in southern Delhi have been asked to remain closed today.

Hundreds of people also protested in other parts of the city, including in Jawaharlal Nehru University and outside the city's police headquarters.

Live footage from the northern city of Lucknow today showed students at Nadwa university throwing stones at security forces, who retaliated by throwing the stones back at them.

The students have been locked inside the campus.

The situation remains tense and more protests are expected. Students at the prestigious Indian Institute of Technology in the southern city of Chennai (formerly Madras) have already announced a protest this afternoon.

And students in Delhi University have announced that they are boycotting examinations in solidarity. 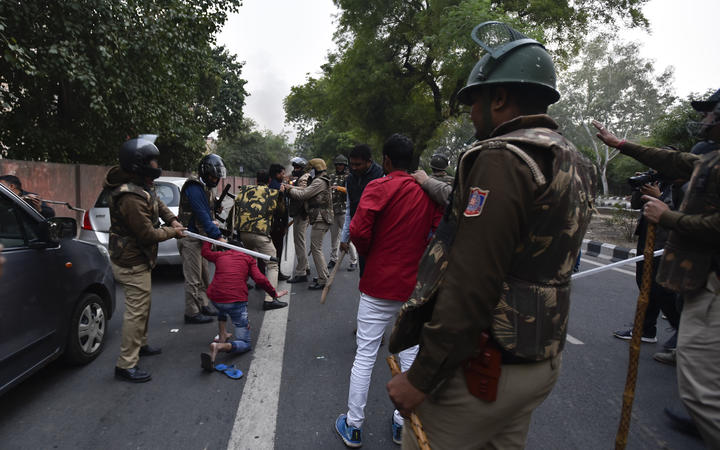 On Sunday, hundreds of students across Indian cities came out in support of those protesting in Jamia Millia Islamia.

In the northern city of Aligarh, students of Aligarh Muslim University clashed with police, prompting the university to close down the campus until 5 January.

A large protest also broke out in the southern city of Hyderabad, as students of Maulana Azad Urdu University carried slogans against the police action in Delhi.

Students in other cities like Varanasi and Kolkata also held marches in solidarity throughout Sunday.

The law allows non-Muslims from Bangladesh, Pakistan and Afghanistan, who entered India illegally, to become citizens.

The Hindu-nationalist BJP government argues that the law aims to accommodate those who have fled religious persecution.

Critics say the law is part of the government's agenda to marginalise Muslims, and that it violates secular principles enshrined in the constitution.

Earlier this week the United Nations Human Rights office voiced concern that the new law was fundamentally discriminatory in nature.

The government denies any religious bias and says Muslims are not covered by the new law because they are not religious minorities, and therefore do not need India's protection.

Meanwhile, people in Assam fear that they will be "overrun" by illegal non-Muslim migrants from neighbouring Bangladesh.

They argue that outsiders will take over their land and jobs - eventually dominating their culture and identity.

The protests in Assam have little to do with concerns about the exclusionary nature of the law and the threat to secularism.

They have more to do with indigenous fears about being demographically and culturally swamped by "outsiders".