Scotland "cannot be imprisoned in the union against its will" by the UK government, Scottish first minister Nicola Sturgeon says. 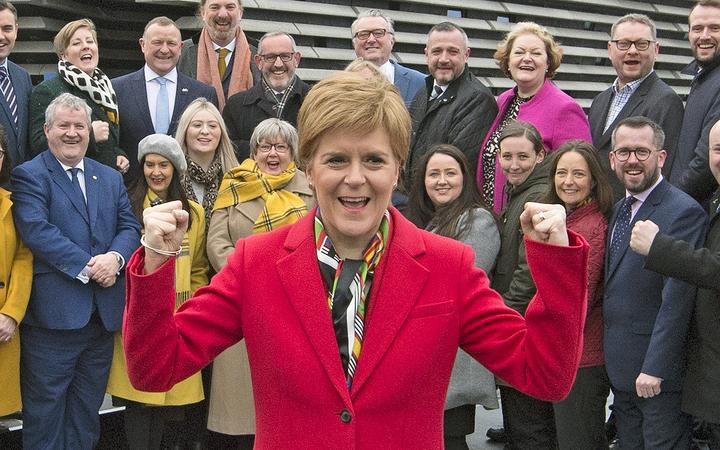 Ms Sturgeon said the SNP's success in the general election gave her a mandate to hold a new referendum on independence.

However, UK ministers are opposed to such a move with Michael Gove saying the vote in 2014 should be "respected".

Ms Sturgeon told the BBC that if the UK was to continue as a union, "it can only be by consent".

She told the BBC's Andrew Marr Show the UK government would be "completely wrong" to think saying no to a referendum would be the end of the matter, adding: "It's a fundamental point of democracy - you can't hold Scotland in the union against its will."

However Mr Gove told the Sophy Ridge programme on Sky that "we were told in 2014 that that would be a choice for a generation - we are not going to have an independence referendum in Scotland".

PM Boris Johnson's Conservatives won a Commons majority of 80 in the snap general election, the party's biggest election win for 30 years - sweeping aside Labour in its traditional heartlands. When MPs return to Westminster next week, MPs are due to begin the process of considering legislation paving the way for the UK to leave the European Union on 31 January.

In Scotland, however, the SNP (Scottish National Party) won a landslide of seats in the snap general election making gains from the Conservatives and Labour and unseating Lib Dem leader Jo Swinson.

The Scottish government wants a referendum deal with UK ministers similar to that which underpinned the 2014 vote, to ensure that the outcome is legal and legitimate - but are facing opposition from the UK government.

Ms Sturgeon said it was "fundamentally not democratic" for Mr Johnson to rule out a referendum when his party had been "defeated comprehensively" in Scotland - losing seven of its 13 seats while standing on a platform of opposition to independence.

The SNP leader said: "I said this to him on Friday night on the telephone - if he thinks saying no is the end of the matter then he's going to find himself completely and utterly wrong.

"It's a fundamental point of democracy - you can't hold Scotland in the union against its will. You can't lock us in a cupboard and turn the key and hope everything goes away.

"If the UK is to continue it can only be by consent. If Boris Johnson is confident in the case for the union he should be confident enough to make that case and allow people to decide.

"Scotland cannot be imprisoned within the United Kingdom against its will. These are just basic statements of democracy."

Ms Sturgeon added: "The risk for the Conservatives here is the more they try to block the will of the Scottish people, the more utter contempt they show for Scottish democracy, the more they will increase support for Scottish independence - which in a sense is them doing my job for me.

Mr Johnson spoke to Ms Sturgeon on the phone after being returned to government, and told her that he "remains opposed" to a second independence vote.

A Downing Street spokesman said the prime minster was "standing with the majority of people in Scotland who do not want to return to division and uncertainty".

This was echoed on Sunday morning by Mr Gove, the Chancellor of the Duchy of Lancaster, who said the result of the previous referendum in 2014 should hold for "a generation".

He said: "In this general election we have just seen what happens when politicians try to overturn a referendum result, and in the same way we should respect the referendum result in 2014 in Scotland.

"Scotland is stronger in the United Kingdom. You can be proudly Scottish and proudly British together.

"The best of this country are British institutions like the NHS and the BBC, and therefore we should be proud of what we have achieved together and confident that the UK is a strong partnership that works in the interests of all."

Labour went into the election opposing independence in principle, but open to the idea of backing a referendum should pro-independence parties win the majority of seats in the 2021 Holyrood election.

The party lost all but one of its Scottish seats, shedding votes in every constituency, and former MP Paul Sweeney said it was important for Labour to "reflect" on the constitutional position.

He told the BBC's Sunday Politics Scotland programme: "The way the British state is currently constructed is not sustainable. I think we need to develop a clear policy which is in the form of an ultimatum to the UK government.

"A more federal relationship is something that urgently needs to happen, and I think we need to be galvanised to present an argument that that needs to happen."