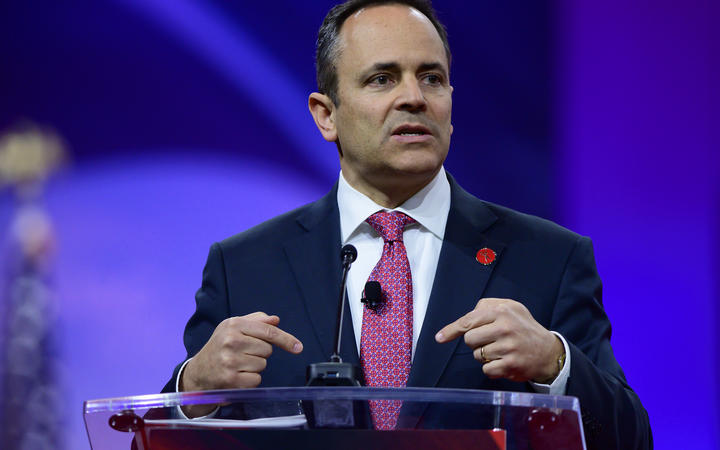 The Republican pardoned a convicted child rapist as well as a convicted murderer whose brother raised money for Bevin's election campaign.

Bevin was defeated by Democrat Andy Beshear in November after a contentious election.

The flurry of pardons sent shockwaves through the state's legal system.

State prosecutors told local media they had not been consulted on Bevin's decision, and families of the victims were not notified in advance.

"I'm a big believer in second chances," Bevin said in a statement to the Washington Post newspaper. "I think this is a nation that was founded on the concept of redemption and second chances and new pages in life."

Bevin's spate of pardons includes Dayton Jones, convicted of sexually assaulting a 15-year-old boy, Brett Whitaker, convicted of killing a pastor and his wife while drink-driving, and a woman who was sentenced to life in prison for throwing her newborn in the trash after giving birth in a flea market outhouse.

He also pardoned a man who was sentenced to 23 years in prison last year for raping a nine-year-old child.

The extensive list includes Patrick Brian Baker, convicted in 2017 of reckless homicide, robbery, impersonating a police officer and tampering with evidence linked to a 2014 home invasion that resulted in the death of Donald Mills.

Baker's brother and sister-in-law held a political fundraiser for Bevin last year, raising $US21,500 and donating an additional $US4000 to his campaign at the same event, first reported by the local Courier Journal newspaper.

Baker had served just two years of his 17-year sentence when Bevin pardoned him on 9 December. His co-conspirators in the robbery and homicide were not pardoned.

In his decision to pardon Baker, Bevin called him "a man who has made a series of unwise decisions in his adult life", including his drug addiction, and called the evidence against him "sketchy at best". 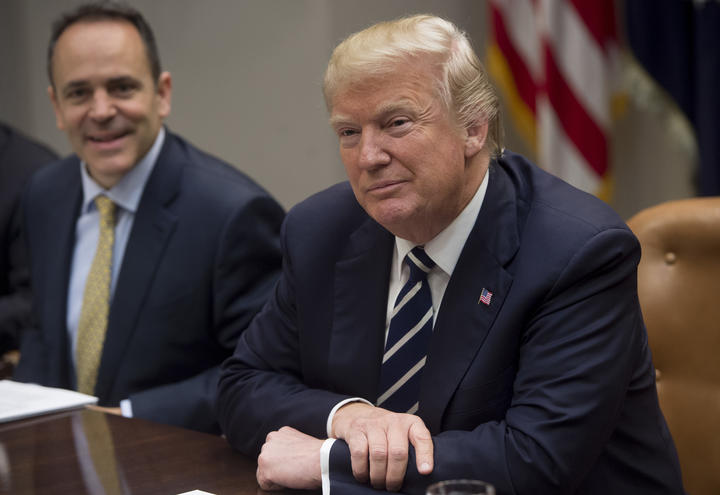 The former governor, a Republican, had aligned himself closely with President Donald Trump in the weeks before the election Photo: AFP

State lawmakers have now called on the Kentucky attorney general to investigate Bevin's pardon of Baker, according to local media.

It is typical for governors to give pardons on their way out of office. Former Governor of California Jerry Brown is thought to sit near the top in terms of numbers, issuing 1189 pardons and 152 commutations while in office from 2011-2018. Most of these pardons erased historic conviction records for drug crimes and non-violent offences.

The violent nature of some crimes forgiven by Bevin have fuelled disapproval.

"What this governor did is an absolute atrocity of justice," Commonwealth Attorney Jackie Steele, who prosecuted Baker, told the Washington Post. "He's put victims, he's put others in our community in danger."

Some critics of the pardoning spree suggest it contrasts with Bevin's decision while in office to scrap an order restoring the right to vote for offenders who have completed their sentences for non-violent crimes.

On Thursday, the newly elected Beshear signed an executive order to restore the vote for more than 140,000 convicted felons who have served their sentences.

In a tweet on Thursday, the Democratic Governors Association said Bevin "kept standing with special interests until the very end - even at the expense of Kentuckians' safety and wellbeing".

Polls suggested Bevin left office as one of the least popular governors in the country, following high-profile battles with unions and teachers.

But others celebrated Bevin's actions, including Amanda Hall, an organiser for the American Civil Liberties Union, who had her 2009 drug trafficking conviction pardoned by Bevin this month.

"I hope that governors to come see the example that you have given us about redemption and second changes," Hall said in a video posted to Twitter. "This is one of the best days of my life."

Past presidents have also been criticised over their use of pardons, and critics accuse President Donald Trump of using his powers of pardon to address what he believes are political wrongs.