NSW is again in the grip of a bushfire crisis with homes under threat in several areas including Sydney, where the air quality is at "hazardous" levels. 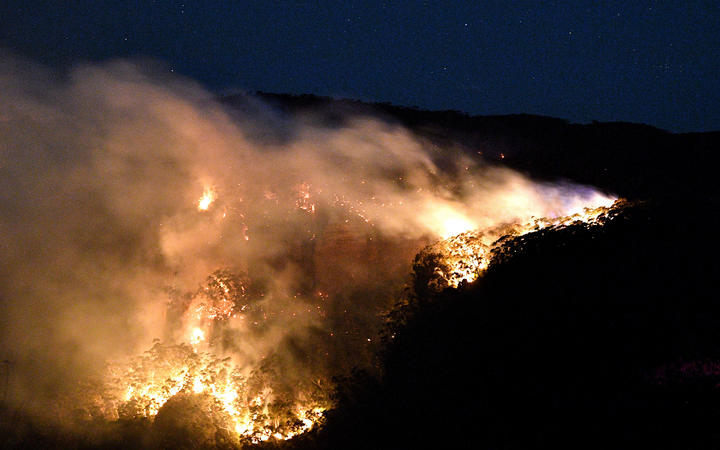 A bushfire burns in the Blue Mountains of the New South Wales on 2 December, 2019. Photo: Saeed Khan / AFP

During the worst of the conditions, seven bushfires were burning at emergency level across the state.

The Green Wattle Creek blaze, on Sydney's south-west fringe, was still burning out of control but was downgraded from emergency to a watch and act shortly after 11pm as conditions eased.

Deputy Commissioner Rob Rogers said it was not yet known how many properties had been lost and whether they were homes or sheds.

He said three firefighters were also injured at a fire burning near Nattai in Sydney's south-west and were treated for minor injuries.

The NSW Bureau of Meteorology (BOM) has also issued a road safety alert for Sydney because of smoke affecting visibility.

The BOM warned of dangerous road conditions into Thursday evening and Friday morning, particularly for southern and south-west suburbs.

The RFS also warned a heavy smoke haze would remain overnight in areas including Sydney and the Central Coast.

Thick smoke will continue on Friday morning, due to a temperature inversion which will keep smoke trapped in some areas.

As of 10.30pm there were 110 bush and grass fires across the state, with scores yet to be contained.

Evacuation advice was issued by the RFS for residents near the blaze at Gospers Mountain, which has so far burnt through 230,000 hectares of land on Sydney's doorstep.

The RFS warned anyone in the Colo Heights area that it was too late to leave and that residents should seek shelter as the fire approached.

Fire crews were trying to slow the spread of the Green Wattle Creek blaze, 30 kilometres west of Campbelltown.

Overnight winds fanned embers across Burragorang Lake and created a spot fire that was burning east towards the towns of Nattai and Oakdale where more than 2000 residents live.

"I'm not leaving, this is my family home and I've lived here too long to go," Ms Dowling said.

"I know what to do and how to defend myself and that's the way it is.

"I've cleared the roof, mowed the lawn and I'm not going anywhere," she said.

A fire burning at Little L Complex in the Yengo National Park near Singleton may impact areas around Wollombi, Congewai with up to 100 properties in the area under threat.

Residents in Laguna or Yengo areas were urged to leave towards Cessnock as 11 tankers attempted to tackle the blaze.

Those in Boree were advised it was too late to leave.

'We do not have the resources'

"If you are in an isolated area we just do not have the resources to get to you, and the safest thing for you to do is leave and leave now," she said.

Ms Bell said there were not enough RFS crews to go around.

"We estimate there are 100 properties directly under threat from this fire and we have 11 appliances in the area," she said.

One resident of Bawley Point in the Shoalhaven said she was "really scared" as the bushfire at Currowan was upgraded to emergency level.

"My partner wanted to stay and he kept reassuring me - I didn't think it would come to this."

Another local said: "I'm a bit shaky at the moment. Being from Norway we pretty much have snow storms but nothing like this."

Before midnight on Thursday, the Currowan fire was downgraded to a watch and act, with conditions easing across the area.

However, residents were told it's still not safe to go home in areas impacted by the fire.

A fire at Bangala Creek near Tenterfield was spreading quickly in a north-easterly direction, but it was also downgraded overnight.

The RFS said a bushfire at Three Mile on the Central Coast was impacting Mangrove Mountain and firefighters were working to protect properties in the area.

The heavy smoke was impacting the first day of the Australian Open at the Australian Golf Club, in the southern Sydney suburb of Rosebery, which got underway on Thursday.

New Zealand golfer Ryan Chisnall, who suffers from asthma, was spotted wearing a protective face mask during the opening round on Thursday afternoon.