Desperate parents are turning to alternative healers in Samoa as a measles epidemic continues to rock the Pacific nation.

A nurse carries a delivery of the MMR vaccine that helps to safeguard against measles. Photo: RNZ Pacific / Jenny Meyer

A state of emergency was declared this week in a bid to contain the spread of measles, which has claimed 20 lives to date - 19 of them children under the age of five.

Samoa's government has ordered compulsory vaccinations, and a mass immunisation campaign is underway, but authorities fear the situation is going to get worse before it gets better.

The crisis has seen some parents turning to questionable alternative therapies in a bid to save their children from the disease.

Mr Neufelt did not claim his water could cure measles, but said spraying it on sick children and getting them to drink it would alleviate the symptoms of the disease.

"They're feeling good," he said. "The measles are already … not cured, but it's already back to normal," he said. 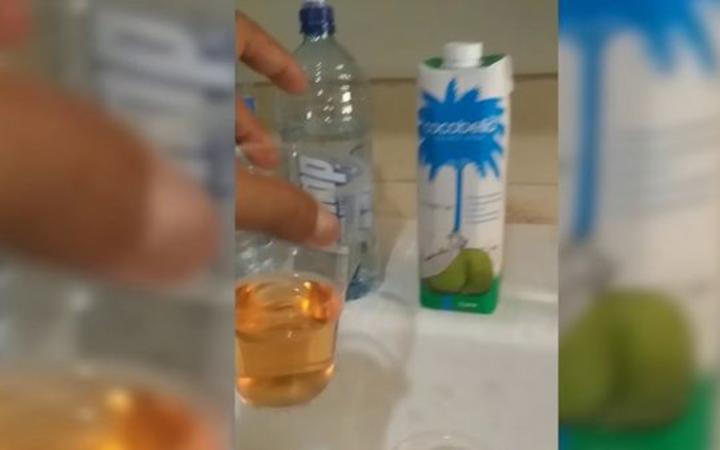 The product is just tap water put through a filter in his kitchen, but those who had paid for it, like mother Janet Vaitagutu, believed it had helped.

"It's really good for curing the virus," Ms Vaitagutu said.

The Samoan government has banned large gatherings to try to contain the measles epidemic, but parents continued showing up seeking Mr Neufelt's treatment.

The government says there have been more than 1644 cases since the outbreak began last month.

Health authorities were concerned these types of alternative therapies could discourage people from seeking proper medical treatment and getting vaccinated.

The government posted a directive to their Facebook page, highlighting compliance with an emergency vaccination order was compulsory.

"Any person that actively discourages or prevents in any way members of the community from receiving their vaccination injection, is hereby warned, to cease immediately, and is similarly warned not to take any further action of that kind," it read.

In a statement earlier this week, Samoa's Health Ministry said, "Vaccination provides the best and safest protection against measles".

The low vaccination rate was one of the major causes of the deadly epidemic.

Local officials said only two thirds of the population were immunised, but other estimates put the figure even lower.

Last year, two infants died after two nurses incorrectly mixed and administered the measles, mumps and rubella (MMR) vaccine, which was then recalled and temporarily banned by the government.

Grandmother Mauga Kerita said she went to a free clinic because she was fearful about the spread of the disease.

"They [are] feeling panicked because it's getting worse," she said.

Tonga and Fiji are also trying to contain outbreaks, which are believed to have originated in New Zealand, where there are more than 2000 confirmed cases.

But much higher vaccination rates meant there had been no deaths in those countries.

Eseta Meki's two-year-old son was among those in Samoa who had not been vaccinated. He died on Monday after being rushed to the hospital with a fever and a rash.

"The nurses tried their best but at the end they told me they couldn't save him," Ms Meki told the ABC this week.

She urged other parents to get their children vaccinated.

"My advice to parents and people is please take good care of your children."

The chair of Auckland's Pacific Leadership Forum, Teleiai Edwin Puni, told RNZ the disease is taking a toll on affected families, and help is needed.

"The crisis is not just with the vaccinations, the medical side. But there is also a lot of the mental and the social impact and this is something we know very well with our experience of the tsunami in Samoa ten years ago."

A New Zealand fundraising appeal has been launched.

Fears of vaccine shortage in Fiji

A health official in Fiji has warned that if the shortage of measles vaccine continues it will have a devastating effect on the government's efforts to curb the outbreak of the disease in the country.

The health ministry says it's prioritising vaccines for those in affected areas, children aged between six months and three years, and people travelling overseas.

But the official, who did not want to be named, says reports of people being turned away from health centres and clinics indicate the ministry has failed to ensure there is enough vaccine.

The official says if a shipment does not arrive as expected from India next week, Fiji can expect the number of measles cases to rise.