Bolivia's interim government says it has asked Venezuelan officials to leave the country, and accused Cubans, including doctors, of instigating unrest in the wake of the resignation of former president Evo Morales. 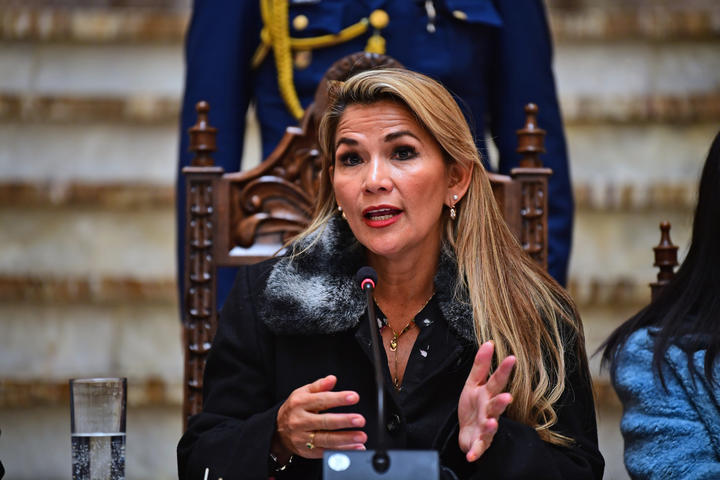 New Foreign Minister Karen Longaric said Cuba would fly home 725 of its citizens, mostly medical doctors, after she raised concerns about their alleged involvement in recent protests. She had also instructed all Venezuelan diplomats to leave for similar reasons.

The foreign policy move in Bolivia comes as protests against the four-day-old government of Ms Anez roil the country amid political tormoil.

Venezuela and Cuba were key allies for leftist Morales, who swept to office as the country's first indigenous president in 2006 and resigned on Sunday over a disputed 20 October election and demands by the military that he step down.

The vote gave him an outright win but was tarnished by allegations of fraud by Washington-based Organization of American States, sparking anti-government protests that often turned violent.

Mr Morales and his vice president fled the country earlier this week, and were given asylum in Mexico. But protests by Morales' supporters have continued in capital La Paz, nearby El Alto, and the central city of Cochabamba.

Both countries have backed Mr Morales' assertion that he was toppled in a foreign-backed coup.

Other right-wing administrations in the region, including Brazil and Ecuador, have acted similarly against Cubans in recent months.

The Caribbean island nation has a respected health service and generates export earnings by sending more than 50,000 health workers to more than 60 countries.

Police fired teargas at protesters in La Paz on Friday, while schools remained closed and fuel deliveries were disrupted by road blocks.

Local media reports showed violent standoffs between coca farmers and police in the region of Cochabamba. Bolivia's official ombudsman said there had been at least four people killed in the region on Friday and put total deaths so far in the protests at 18.

The head of the powerful union Bolivian Workers' Center (COB), Juan Carlos Huarachi, said that the group was open to dialogue to help stop the "bloodshed."

"We are seeing the army and the police mobilised, using tear gas, firing bullets and that worries us," he said, demanding that the government find a route to peace.

Ms Anez said on Friday that Morales was free to return to Bolivia, but would have to respond to allegations of electoral fraud and would not be immune from investigation.

Mr Morales resigned after an Organization of American States audit found electoral irregularities and the military withdrew its backing and urged him to step down to help restore calm.

In the first sign of a potential breakthrough, lawmakers from Mr Morales' party said they reached an agreement with the interim government late on Thursday to work toward a new presidential election.

Ms Anez has said Mr Morales could not be a candidate in that election.

"Nobody has thrown him out, but yes, there's a need for him to respond to accusations of electoral fraud, as well as many allegations of corruption," Ms Anez told reporters at the presidential palace.

Mr Morales told Reuters in an interview in Mexico on Friday that elections could be held without him. But no candidate from his Movement for Socialism (MAS) party has yet emerged to replace him.

"It's very important that the international community and the country know she has set a date and time," Mr Mesa was quoted as saying in an interview with Spanish newspaper El Pais.