Italy is set to declare a state of emergency in Venice after the city was engulfed by 1.87m high water levels, flooding its historic basilica and cutting power to homes. 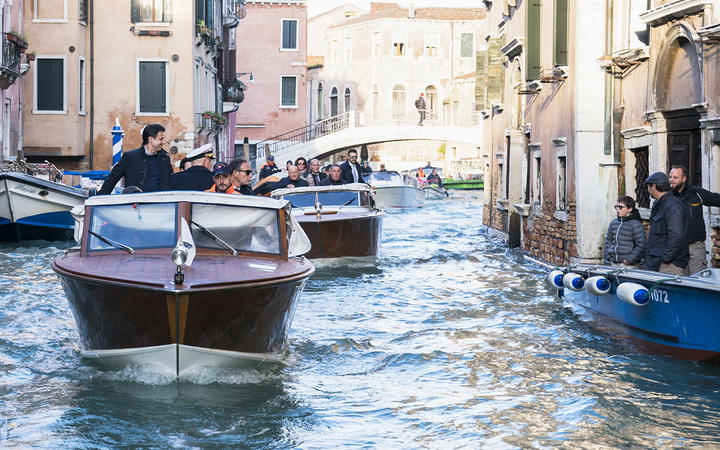 More than 80 percent of the city, a Unesco world heritage site, was under water when tides were at their highest.

Italy's Prime Minister Giuseppe Conte described the flooding as "a blow to the heart of our country".

He said the government would now act quickly to provide funds and resources.

"It hurts to see the city so damaged, its artistic heritage compromised, its commercial activities on its knees," Mr Conte, who visited the region late on Wednesday, wrote in a Facebook post (in Italian).

He said the government would "accelerate" the building of structural defences for the lagoon city, referring specifically to the so-called Mose project - a hydraulic barrier system to shut off the lagoon in the event of rising sea levels and winter storms.

The prime minister said he intended to declare emergency measures on Thursday, adding that individuals could claim up to €5000 ($NZ8640), and businesses up to €20,000, in compensation.

It comes as Venetians woke to sirens indicating that the tide would "remain high" in the coming days.

The mayor of Venice, Luigi Brugnaro, blamed climate change for the highest water levels in more than 50 years this week, saying the impact was "huge" and would leave "a permanent mark". 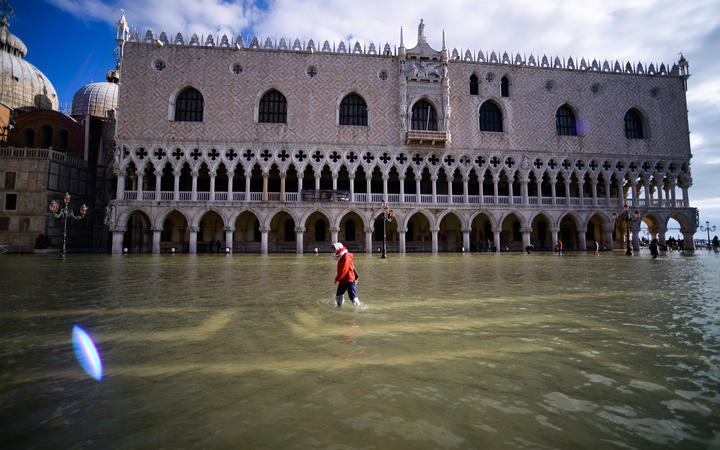 A person walks across the flooded St. Mark's Square by the Doge's palace on 14 November, 2019 in Venice. Photo: Filippo Monteforte / AFP

St Mark's Square - one of the lowest parts of the city - was one of the worst hit areas.

Mr Brugnaro said the famous St Mark's Basilica had suffered "grave damage". The crypt at the historic landmark was completely flooded on Tuesday and there are fears that the basilica's columns may have been structurally damaged.

"The damage will run into hundreds of millions of euros," Mr Brugnaro warned.

On Wednesday, pumps were deployed to drain water from the church and its 12th Century crypt.

Small business owners and vendors in the city were appealing to tourists, many of whom had left the city after the water levels rose, to return.

One merchant told the mayor that his business relied on tourism, but that his kiosk was swept away by the tide.

The city of Venice is made up of more than 100 islands inside a lagoon off the north-east coast of Italy. It suffers flooding on a yearly basis.

Only once since official records began in 1923, however, has the tide been higher than it reached this week - hitting 1.94m in 1966.

On the island of Pellestrina, two people died as a result of the flooding on a thin strip of land that separates the lagoon from the Adriatic Sea. A resident was electrocuted as he tried to start a pump in his home and a second person was found dead elsewhere on the island. 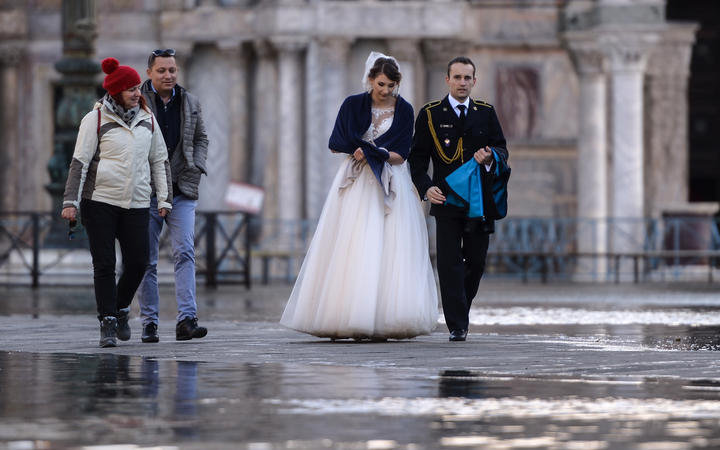 A newlywed couple walks across a flooded square on 14 November, 2019 in Venice. Photo: Filippo Monteforte / AFP

The flooding in Venice was caused by a combination of high spring tides and a meteorological storm surge driven by strong winds blowing north-eastwards across the Adriatic Sea.

The winds were so strong that an empty vaporetto - or public water bus - ended up grounded in Venice's Arsenale complex.

Mr Conte said the Mose flood defence project, part of which was successfully tested in 2013, was not expected to be operational until the end of 2021.

Work on the project began back in 2003 and has already cost billions of euros. It has been plagued by corruption and bribery allegations.

In 2014, the former mayor of Venice, Giorgio Orsoni, stepped down after he was accused of involvement in the embezzling of around €20m in public funds earmarked for flood defences.

Is climate change behind Venice flooding?

This latest Acqua Alta (high water) occurrence in Venice is the second highest tide the city has experienced in recorded history. However, if we look at the top 10 tides, five have occurred in the past 20 years and the most recent was only last year. 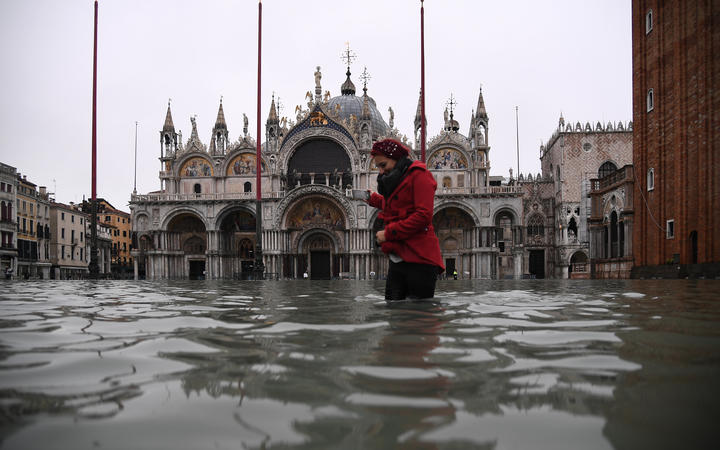 While we should try to avoid attributing a single event to climate change, the increased frequency of these exceptional tides is obviously a big concern. In our changing climate, sea levels are rising and a city such as Venice, which is also sinking, is particularly susceptible to such changes.

The weather patterns that have caused the Adriatic storm surge have been driven by a strong meridional (waving) jet stream across the northern hemisphere and this has fed a conveyor belt of low pressure systems into the central Mediterranean.

One of the possible effects of a changing climate is that the jet stream will be more frequently meridional and blocked weather patterns such as these will also become more frequent. If this happens, there is a greater likelihood that these events will combine with astronomical spring tides and hence increase the chance of flooding in Venice.

Furthermore, the meridional jet stream can be linked back to stronger typhoons in the north-west Pacific resulting in more frequent cold outbreaks in North America and an unsettled Mediterranean is another one of the downstream effects.