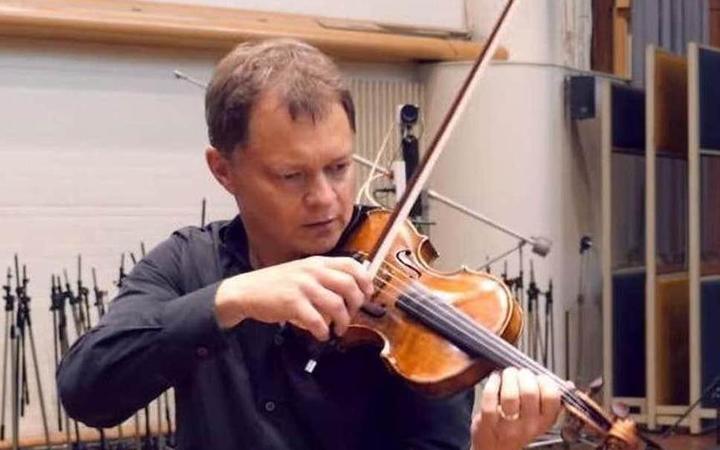 The instrument was handed over to professional musician Stephen Morris in a supermarket car park in Beckenham after secret negotiations.

Plain-clothes police officers were in attendance in case the handover went wrong, as the man who had the violin said he made a mistake and apologised.

Mr Morris said having the violin back had not yet "sunk in".

"I feel a bit battered and bruised," he said. "I haven't had a great deal of sleep since it went missing," adding that he would have a beer to celebrate.

The violin, which was made by master craftsman David Tecchler in 1709, was left on the London to Orpington train on 22 October when Mr Morris got out at Penge East with his bike.

The 51-year-old from Sydenham, who has played on film scores including The Lord of the Rings and James Bond movies and recorded with David Bowie and Steve Wonder, was distraught.

British Transport Police (BTP) later released a CCTV image of a man believed to have taken the violin as the train approached Bromley South and asked him to get in touch, sparking appeals on social media.

The breakthrough came on Thursday when Mr Morris received a direct Twitter message, which read: "I recognise the person in the picture. I think it may be somebody I know - I'd like to be of help. I know what it's like to leave valuables on a train."

Over the next 24 hours further contact was made with the person who had sent the message - it's suspected that he was in fact the individual who had taken the violin.

Calling himself "Gene", which was not his real name, the man agreed to meet Mr Morris on Friday evening at a Waitrose car park near Beckenham train station.

In an operation co-ordinated by the musician's friend and former police officer, Mike Pannett, a team of plain-clothes officers were placed on stand-by.

"Mike was the engine room for the whole thing," said Mr Morris.

Shortly after 10.10pm local time, the police team watched as "Gene", in his mid to late 20s, approached Mr Morris, shook his hand and transferred a holdall containing the violin.

"He was very apologetic, he said he wanted to hand it to me in person," he said.

The violin and bows were intact and "in tune".

"It couldn't have ended in a happier way," Mr Morris said

A spokesperson for the British Transport Police said they would be taking no further action against the man because he had taken reasonable steps to contact the violin owner and had handed it back.

Detective Chief Inspector Phil Briggs said the message from the start had been "please return it".

"It was a gentlemanly exchange with the victim," he said.