A car bomb has killed a dozen people and injured 30 in a market of a Syrian border town that Turkish-backed forces seized last month, prompting Ankara to blame the Kurdish YPG militia.

it had targeted in its incursion. 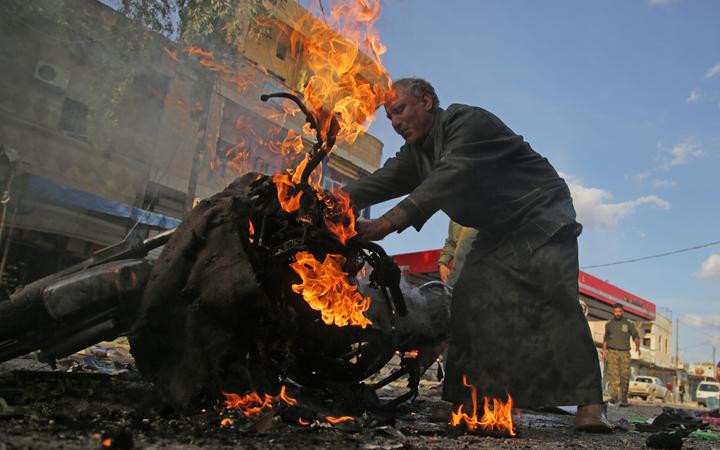 A Syrian man stands next to a burning motorcycle at the site of a car bomb explosion in the northern Syrian Kurdish town of Tel Abyad, on the border with Turkey. Photo: AFP

The Syrian Observatory for Human Rights said pro-Turkey fighters and civilians were among the dead and injured in Tel Abyad. Turkey's state-owned Anadolu Agency said 13 were killed after a "bomb-laden vehicle" exploded.

Tel Abyad is one of two major border towns that saw the heaviest fighting when Ankara launched the incursion on 9 October against the Syrian Kurdish YPG that drew international condemnation. The YPG had for years been allied to the United States in the fight against Islamic State. 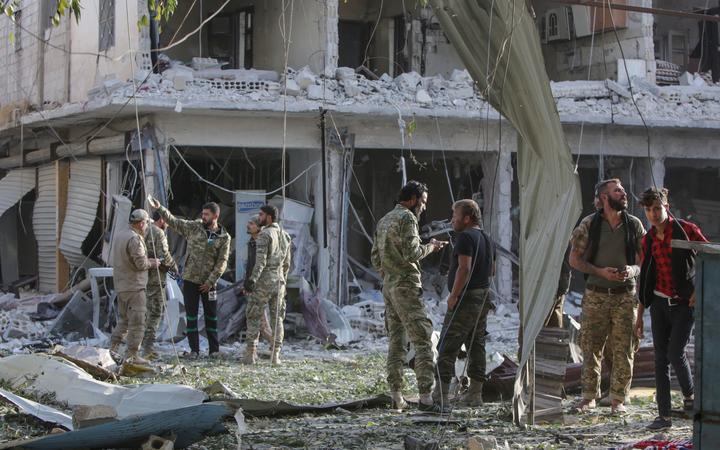 The explosion comes after two weeks of relative calm in northeastern Syria, and a day after Turkish and Russian troops began joint ground patrols under a deal between the two countries that pushed the YPG from Turkey's border.

While Moscow has said the YPG have withdrawn to at least 30km from the border under the deal, Ankara has been sceptical and held out the possibility of new attacks if members of what it sees as a terrorist group remain.

"We condemn this inhuman attack of the bloody PKK/YPG terrorists who attacked the innocent civilians of Tel Abyad who returned to their homes and lands as a result of the Operation Peace Spring," Turkey's defence ministry said on Twitter.

A spokesman for the Syrian Democratic Forces, which includes the YPG, was not immediately available for comment. 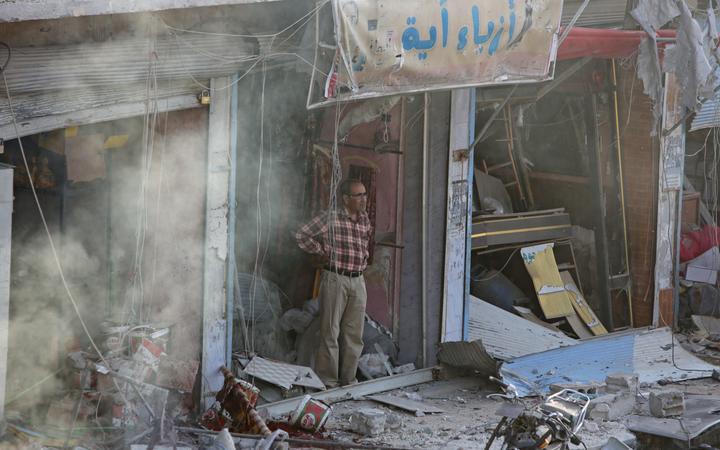 A Syrian man views the damage from the explosion which is being blamed on the Kurdish YPG militia. Photo: AFP

Days after President Donald Trump's abrupt decision on 6 October to pull out United States troops from northeastern Syria, Turkey and allied Syrian rebels launched a cross-border offensive and seized control of Tel Abyad and some 120km of land along the frontier.

Ceasefire deals Ankara struck first with Washington and then with Moscow halted fighting in recent weeks. The UK-based Observatory has said some 300,000 people have been displaced by the offensive and 120 civilians killed.

The incursion, which was condemned by scores of countries in the West and the Middle East, left the Turkey-backed rebel Syrian National Army largely in control of Tel Abyad.

Turkey's defence ministry published photographs of concrete and debris piled on a street in the town. Anadolu said some of those wounded in the blast were being treated in the Turkish city of Sanliurfa 55km to the north.

On Wednesday, President Tayyip Erdogan said Turkey had information that the YPG had not completed its pullout from the border region. He has warned that Turkey reserves the right to resume attacks.

Russia is the Syrian government's most powerful ally and helped it turn the tables in the country's eight-and-half-year civil war by retaking much of the country from rebels since 2015.

The Turkish-Russian deal last week allowed Syrian government forces to move back into border regions from which they had been absent for years.