A driver accused of the manslaughter of 39 people found dead in a lorry was part of a "global ring" of people smugglers, prosecutors have alleged. 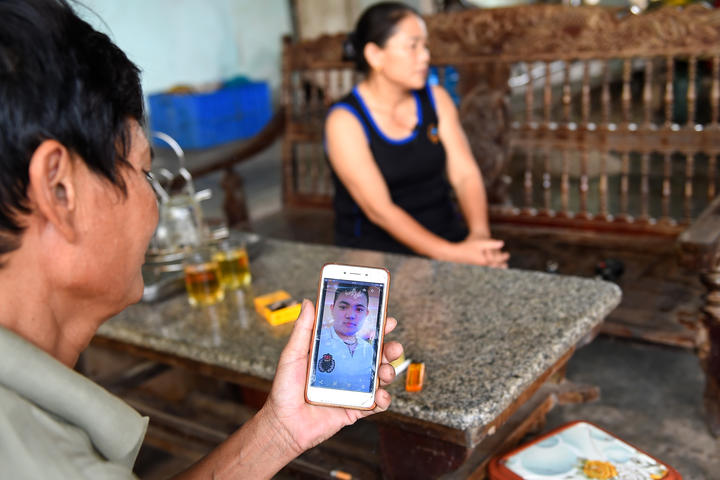 In Vietnam, Hoang Lanh holds an image of his 18-year-old son, Hoang Van Tiep, who is feared to be among the 39 people found dead in a lorry in Britain. Photo: AFP

The 39 bodies were found in the lorry trailer on an industrial estate in Grays, Essex, on Wednesday.

Writing in a book of condolence, Prime Minister Boris Johnson said the world had been "shocked by this tragedy".

Mr Robinson appeared via video-link and is charged with 39 counts of manslaughter, conspiracy to traffic people, conspiracy to assist unlawful immigration and money laundering.

Prosecutor Ogheneruona Iguyovwe described the conspiracy charges as "a global ring" involving "the movement of a large number of illegal immigrants into the UK".

Mr Robinson was not asked to indicate pleas and will next appear at the Old Bailey on 25 November.

DNA tests are being carried out in Vietnam to help to identify the victims.

Three other people arrested in connection with the deaths were released on bail on Sunday.

Another driver, who is suspected of bringing the container to Zeebrugge before it crossed the Channel, was arrested at the port of Dublin on Saturday on unrelated charges.

The man was said to be "of interest" to the Grays investigation. 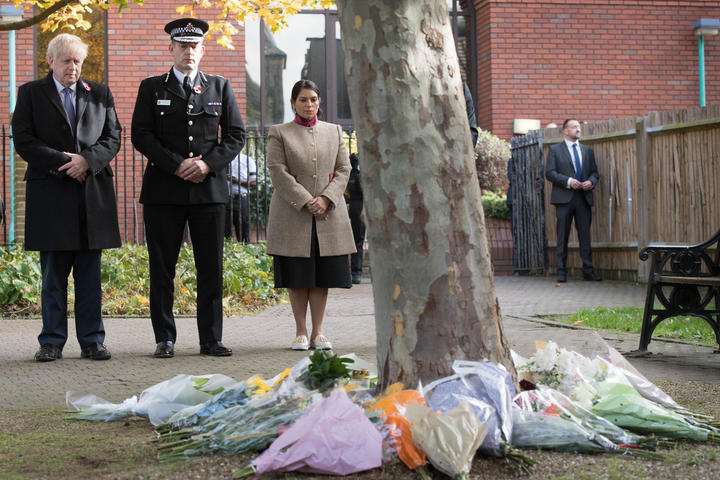 The prime minister was joined at Thurrock Council's offices by Home Secretary Priti Patel and members of the emergency services.

They also paid their respects to the victims by laying flowers in the nearby Mulberry garden.

Writing in the book of condolence, Mr Johnson said: "The whole nation, and indeed the world had been shocked by this tragedy and the cruelty of the fate that has been suffered by innocent people who were hoping for a better life in this country.

"In condemning the callousness of those responsible for this crime, we in the government of the United Kingdom resolve to do everything in our power to bring the perpetrators to justice."

Ms Patel later told the House of Commons there would be an "increased presence" of Border Force officers at Purfleet, the Essex port where the container arrived.

She also said an agreement had been reached with Belgian authorities to send additional immigration officers to Zeebrugge.

Detectives in Essex are now working on the largest mass fatality victim identification process in the force's history.

Initially, police said the 31 men and eight women were Chinese but a number of Vietnamese families have described how they fear their loved ones are among the dead.

Some of the victims are said to have paid thousands of pounds to guarantee their safe passage to the UK, from where they would be able to carry out work that would give them money to send home.

Reuters reports that the UK government has sent documents to Vietnam's Ministry of Public Security in a bid to identify four of the 39 victims.

Families in the country have shared their fears their loved ones could have been among those who died.

Pham Thi Tra My, 26, sent her family a message on Tuesday night, saying her "trip to a foreign land has failed".

Meanwhile, Nguyen Dinh Gia said he had not heard from his son Nguyen Dinh Luong, 20, since he told him last week he was trying to join a group to get from Paris to the UK.

Detectives are also investigating claims the lorry could have been part of a convoy of three carrying about 100 people.