The Duke of Cambridge is "worried" about his brother after he talked about his mental health in a TV documentary, a Kensington Palace source has told the BBC. 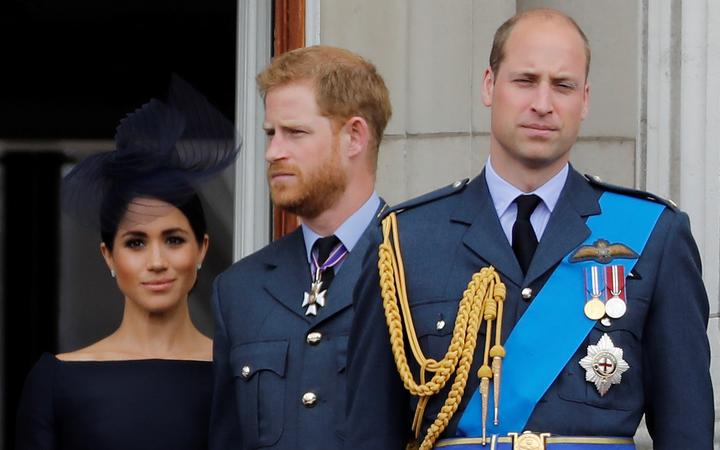 The Duchess and Duke of Sussex and Prince William, Duke of Cambridge, pictured in July on the balcony of Buckingham Palace to watch a military fly-past marking the RAF centenary. Photo: AFP

Prince William is said to be hoping the Duke and Duchess of Sussex "are all right" after they told an ITV documentary they were struggling.

The palace source said there was a view the couple were "in a fragile place".

Kensington Palace had no comment on the ITV film, which aired on Sunday.

The documentary followed the Duke and Duchess of Sussex on their tour of southern Africa earlier this month.

In interviews, the couple both said they were struggling with the intense scrutiny from elements of the British tabloid press.

The palace source played down suggestions that Prince William was "furious" with his brother after the documentary aired on Sunday.

It followed Prince Harry's admission in the film that he and William have "good days" and "bad days".

Asked about media reports of a rift between the brothers, the Duke of Sussex said that "inevitably, stuff happens" as a result of "this family being under the pressure that it's under".

He added: "We are brothers. We will always be brothers.

BBC royal correspondent Jonny Dymond said the rest of the Royal Family "wouldn't be at all happy" about the ITV interview but the couple "clearly felt now was the time that they wanted to clear the air and put their case directly to people".

It was clear, he added, that the princes' paths were "diverging, particularly when it comes to the media" with William "going out of his way" to try and bring them in, while Harry was still "furious" with them.

Meghan, 38, said in the documentary that adjusting to royal life had been "hard".

"When I first met my now-husband my friends were really happy because I was so happy," she said.

"But my British friends said to me, 'I'm sure he's great but you shouldn't do it because the British tabloids will destroy your life'."

Asked by ITV's Tom Bradby if it was fair to say she was "not really OK", the duchess said: "Yes."

Prince Harry, 35, described his mental health and the way he deals with the pressures of his life as a matter of "constant management".

He said: "I thought I was out of the woods and then suddenly it all came back, and this is something that I have to manage.

"Part of this job is putting on a brave face but, for me and my wife, there is a lot of stuff that hurts, especially when the majority of it is untrue."

The royal brothers previously campaigned together to help open up conversations about mental health.

In 2017, they and Catherine, Duchess of Cambridge, took part in a charity fundraiser for their Heads Together initiative, which they set up to challenge stigma around mental health.

In May this year, the Cambridges and the Sussexes teamed up to launch a text messaging service for those experiencing a mental health crisis.

The couples later announced their charitable foundation would split, but vowed to continue working together on issues like mental health.

Prince Harry's comments about the pressure of media scrutiny come as he and his wife pursue legal actions against the press, with Meghan suing the Mail on Sunday over a claim that it unlawfully published one of her private letters.

The duke filed his own proceedings at the High Court against the owners of the Sun, the defunct News of the World, and the Daily Mirror, in relation to alleged phone-hacking dating back more than a decade