The UK parliament's Speaker John Bercow has refused a government request to hold a "yes" or "no" vote on its Brexit deal. 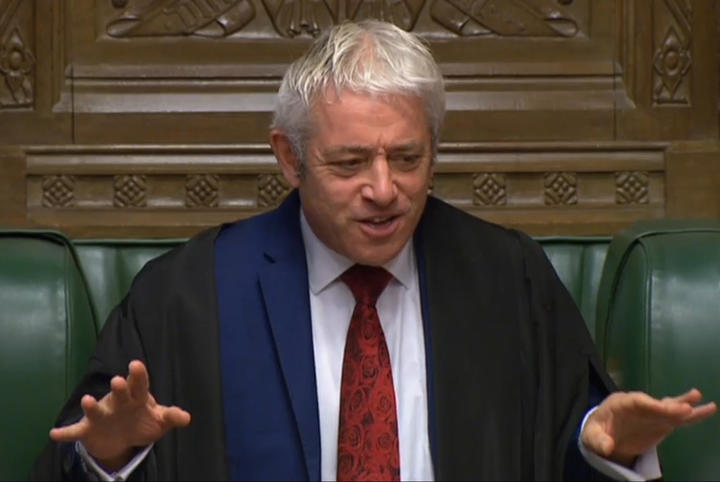 Speaker John Bercow told the Commons he would not allow a second vote. Photo: AFP / PRU

Mr Bercow said a motion on the deal had been brought before MPs on Saturday, and it would be "repetitive and disorderly" to debate it again.

In Saturday's sitting MPs voted to withhold approval of Boris Johnson's deal until it has been passed into law.

The government said it was disappointed, but would go ahead with introducing the necessary legislation.

He added: "The Speaker has yet again denied us a chance to deliver on the will of British people."

The UK is due to leave the EU in 10 days, and while Mr Johnson and fellow EU leaders have agreed a new deal to allow that to happen, it cannot come into force until it is approved by both the UK and European parliaments.

The government wanted to hold a "yes" or "no" vote - or so-called "meaningful vote" - on its deal on Saturday, but MPs instead chose to back an amendment tabled by former Tory Sir Oliver Letwin, which said that could not happen until all necessary Brexit legislation was passed.

That legislation - called the Withdrawal Agreement Bill (WAB) - will be introduced later, but will then have to go through full parliamentary scrutiny in both the Commons and the Lords.

The SNP's Westminster leader, Ian Blackford, called on the government "not to bulldoze" it through Parliament and give time for "full scrutiny".

No 10 was pushing for a second shot at a meaningful vote on Monday, but Mr Bercow told the Commons he would not allow it, and had come to that decision on the basis of a parliamentary convention dating back to 1604.

He cited Parliament's rulebook, Erskine May, which says a motion that is the same "in substance" as a previous one cannot be brought back to the Commons during the course of a single parliamentary session.

The Speaker also said the circumstances around the motion had not changed, so his ruling was "necessary... to ensure the sensible use of the House's time and proper respect for the decisions that it takes".

But Tory MP and Brexiteer Sir Bernard Jenkin appeared to accused Mr Bercow of bias, saying it was "remarkable" how often the Speaker "pleased one lot and not the other".

"It is most unusual for a Speaker so often to prevent the government having a debate on the matters which the government wish put before the House," he added.

Fellow Tory David T C Davies said: "The only consistency one can find in your rulings is that they always seem to favour one side of the argument and never the government."

But Mr Bercow disagreed, adding: "The consistent thread is I try to do what I think is right by the House of Commons."

The Letwin amendment also meant Mr Johnson was required to ask for an extension to the Brexit deadline, according to the terms of the Benn Act.

The PM sent the required letter to the EU but did not sign it, and sent a second letter saying he thought a delay was a mistake.

Meanwhile, the European Parliament's Brexit Steering Group advised MEPs on Monday not to vote on whether to approve the deal until it gets the full sign-off from the UK.

BBC Brussels reporter Adam Fleming said they could hold a special session next week to approve it, but it was more likely to happen at their next planned session on 13 November - meaning an extension would be needed.

The WAB will give legal effect to the withdrawal deal, as well as any agreed transition period, and fulfils requirements on the rights of EU citizens in the UK after Brexit.

It will also allow ministers to make "divorce payments" to the EU foreseen under the current deal.

But MPs will be able to vote on amendments - changes or add-ons - to the bill.

Labour's shadow Brexit Secretary Keir Starmer has said his party will push for a UK-wide customs union with the EU and single market alignment, and back moves to try to put the deal to a referendum.

But the PM's spokesman has reiterated the government's opposition to both proposals.

If the government cannot get the bill through Parliament, the default legal position is for the UK to leave without a deal on 31 October, but that will change if the EU grants an extension.

Monday - first reading - the bill will be introduced and its title read out, usually just a formality.

Wednesday and Thursday - committee stage - where detailed examination of the bill takes place and specific amendments - on a fresh referendum, for example - can be tabled and voted on. The bill then moves on to report stage, which offers further opportunities for amendments before it moves to third reading. This is MPs' final chance to debate the bill before voting on whether to approve it.

If approved, it then moves to the House of Lords to begin a similar scrutiny process.