Margaret Atwood and Bernardine Evaristo have been named the joint winners of the 2019 Booker Prize after the judges broke the rules by declaring a tie. 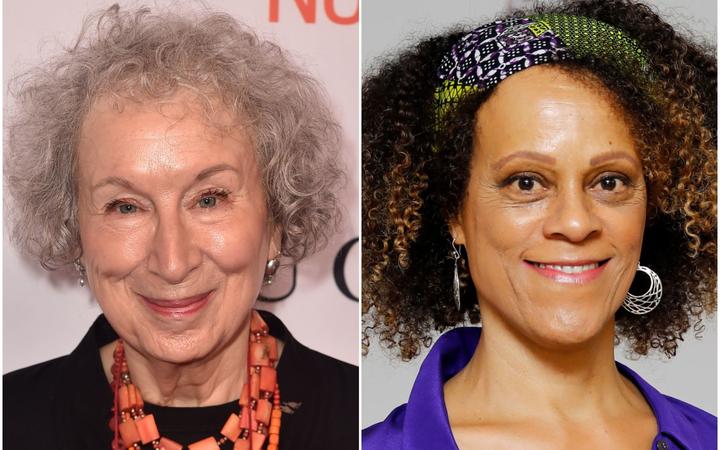 Atwood's The Testaments, the Canadian writer's follow-up to The Handmaid's Tale, was recognised alongside Londoner Evaristo's novel Girl, Woman, Other.

The pair will split the literary award's £50,000 prize money equally.

The Booker rules say the prize must not be divided, but the judges insisted they "couldn't separate" the two works.

Atwood, 79, is the oldest ever Booker winner, while Evaristo has become the first black woman to win.

After their names were called, the pair stood arm-in-arm on stage and Atwood joked: "I would have thought I would have been too elderly, and I kind of don't need the attention, so I'm very glad that you're getting some.

"It would have been quite embarrassing for me ... if I had been alone here, so I'm very pleased that you're here too."

The award's rules were changed after the last tie in 1992, and organisers told this year's judges they were not allowed to pick two winners. But after five hours of deliberations, Peter Florence, the chair of the judges, said: "It was our decision to flout the rules."

Atwood is 'more urgent than ever' 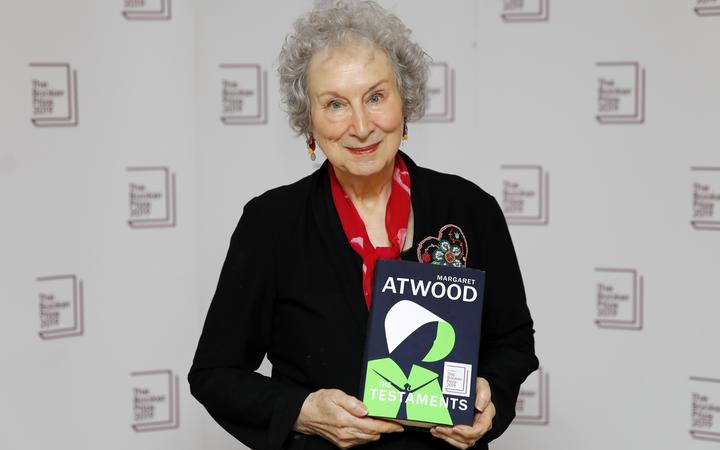 It is 19 years since Atwood won the Booker for The Blind Assassin, and 33 years since she was nominated for The Handmaid's Tale.

With the latter book enjoying newfound popularity and resonance against the backdrop of Donald Trump's America, The Testaments picks up 15 years after the end of that novel. Returning to the totalitarian, patriarchal Gilead, it is told through the voices of Aunt Lydia, one of the handmaids' instructors, and two teenage girls.

Peter Florence said: "It does massively more than follow the single story that we had from Offred. This is beautiful in its depth and exploration of the world of Gilead.

"As she has said, it might have looked like science fiction back in the day, although all of the extremities are rooted in fact. Now it looks more politically urgent than ever before."

Published in September, The Testaments sold more than 100,000 copies in the UK in its first week, making it the fastest-selling hardback novel for four years.

Speaking before the ceremony, Atwood said winning would be "a double-edged sword for me, but for a younger person I think it would be great". 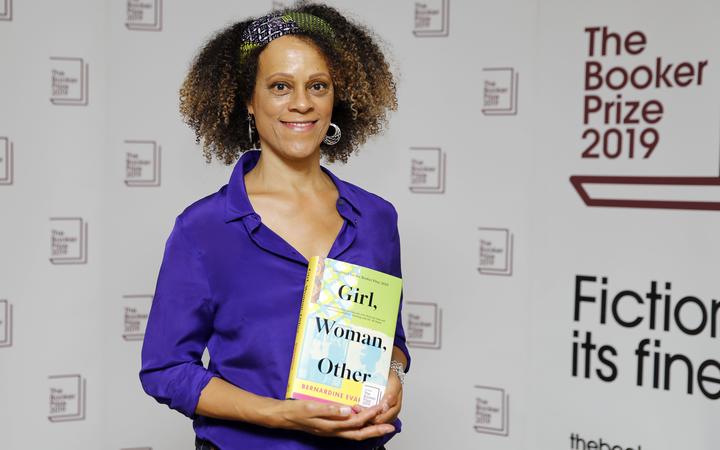 Evaristo was born in London in 1959, and Girl, Woman, Other - her eighth novel - gives a chapter each to the lives of 12 intertwining characters, who are mostly black British women.

"We black British women know that if we don't write ourselves into literature no-one else will," she has said.

There's "something utterly magical" about the book's cast, Florence said.

"They give a wonderful spectrum of black British women today.

"There are stories there of people who haven't been visibly represented in contemporary literature, and in that sense this book is groundbreaking, and I hope encouraging and inspiring to the rest of the publishing industry."

Evaristo, who was made an MBE in 2009 for services to literature, calls it "a readable experimental novel". The experimental element mainly comes from the unorthodox punctuation, often dispensing with quotation marks and capital letters.

The Booker Prize rules say: "The prize may not be divided or withheld."

The award has been shared twice before - in 1974 and 92 - but the rules were then changed.

"The thinking was it just doesn't work - it sort of detracts attention from both, rather than drawing attention to either," according to Gaby Wood, literary director of the Booker Prize Foundation.

So when Florence told her the five judges wanted to announce a tie, she said no. The judges got back around the table. "The more we talked about them, the more we found we loved them both so much we wanted them both to win," Florence said. "We all found that we were torn."

Again, they told Wood they wanted two winners. This time, Wood phoned Baroness Kennedy QC, chair of the Booker Prize Foundation, who told her: "Absolutely not."

"There's a metaphor for our times. And equally, today of all days, when rebellion is in the air, maybe we were a little moved by that."

The panel resolved to hold firm on their split decision. Baroness Kennedy was called again.

"She said, 'Well if that's what they've chosen to do, there's nothing we can do,'" Wood said.

Florence added that both winning books "have urgent things to say".

He told reporters: "They also happen to be wonderfully compelling, page-turning thrillers, which can speak to the most literary audience, to readers who maybe are only reading one, or in this case I hope two books a year, and can speak at different levels to all sorts of different readerships.

"So in that sense they are I hope and believe really valuable Booker Prize winners."

The other nominated novels: