Canada's players helped the local community in Kamaishi recover from Typhoon Hagibis on Sunday after their final Rugby World Cup match against Namibia was cancelled due to the impact of the storm. 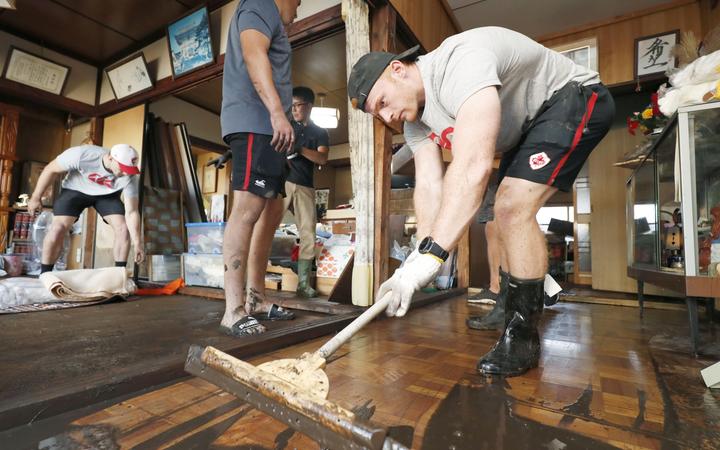 Canada, without a win at the tournament, had been due to play Namibia in Kamaishi but tournament organizers decided on Saturday that the match would be cancelled because of the expected impact of the typhoon.

Typhoon Hagibis has killed at least 23 people, leaving vast swaths of low-lying land in central and eastern Japan inundated and cutting power to almost half a million homes.

Some of the Canadian players have decided to stay on in Japan despite their team going out of the tournament.

"Four of us are staying on tomorrow to do a community barbecue," said captain Tyler Ardron.

"There's a bunch of Canadian guys that have rented a house here, made it a 'Canada House', so we'll do whatever we can to help.

"We were hoping that we would just go out and mingle, interact and just get to know some people but it looks like we might have other things to pitch in."

"What we want to do today, if we can, is get out in the community and help. We've been hosted so well. We want to give back all we can," he added.

World Cup organizers chose to hold two matches in the remote town of Kamaishi in a bid to aid the region's recovery after it was devastated by the 2011 earthquake and tsunami.

More than 1,000 people were killed or went missing in Kamaishi following the tsunami. Uruguay beat Fiji in Kamaishi earlier in the tournament.

Canadian coach Kingsley Jones said losing out on playing against Namibia was a blow for his team as it was their best chance to win a match at the World Cup.

"Right now it is a bit of an empty feeling," said the Welshman.

"I felt today against the opposition that are a good team, that performed well in the World Cup, about the same level as us, we could see where we stand and I believe we would have won today.

"I think that would have given us a sense of an outcome. This feels like there's no outcome at the moment."

Canada have appeared at every Rugby World Cup with their best showing being a quarter-final berth in 1991.