The Trump administration has blocked the US ambassador to the European Union from appearing before a congressional impeachment investigation. 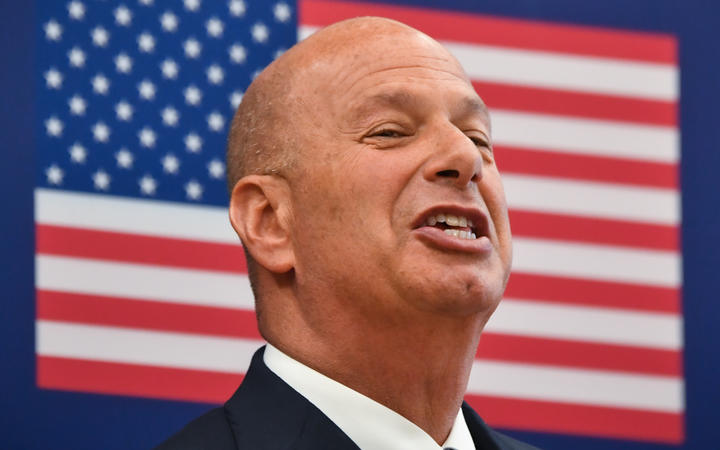 Gordon Sondland was due to meet behind closed doors on Tuesday with staff from three Democratic-led House committees.

But the envoy was directed by the Department of State not to show up.

Mr Sondland was set to be grilled about any role he played in prodding Ukraine to investigate President Donald Trump's political rival, Joe Biden.

The Democratic-led inquiry is trying to establish whether the Republican president withheld nearly $US400m ($NZ635m) in aid to nudge Ukraine's president into launching an inquiry into Mr Biden, whose son, Hunter Biden, was on the board of a Ukrainian energy company.

In a phone call on 25 July, Mr Trump asked the newly elected Volodymyr Zelensky to scrutinise the former US vice-president, who is a leading Democratic contender for next year's White House election.

A whistleblower raised concerns about the phone call, and the Democratic leader of the House of Representatives, Speaker Nancy Pelosi, announced a formal impeachment investigation last month.

Impeachment is a measure by which Congress can seek to remove a president from office.

Mr Sondland said he had been instructed by the Department of State early on Tuesday not to appear for the congressional deposition.

"Ambassador Sondland believes strongly that he acted at all times in the best interests of the United States, and he stands ready to answer the Committee's questions fully and truthfully," said a statement from his lawyer, Robert Luskin.

The attorney said Mr Sondland was "profoundly disappointed" as he had travelled to Washington from Brussels in order to prepare for his appearance.

The political appointee had been due to answer questions on Tuesday from the House foreign affairs, intelligence and oversight committees.

President Trump said Mr Sondland would only have been appearing before a "kangaroo court".

The chairmen of the three committees responded by issuing a legal summons, known as a subpoena, demanding Mr Sondland's testimony and certain documents.

Intelligence committee chairman Adam Schiff told reporters the envoy has text messages or emails "deeply relevant" to the inquiry on a personal device. He said those communications had been provided to the Department of State, which was withholding them.

But Jim Jordan, top Republican on the oversight committee, said he understood why the state department had blocked Mr Sondland's appearance, calling the inquiry "unfair and partisan".

Speaking to reporters, Mr Jordan, of Ohio, accused Mr Schiff of "trampling on constitutional considerations and disregarding legitimate concerns about due process and fairness".

In one of the texts, Mr Sondland said Mr Trump "really wants the deliverable".

In another exchange, Bill Taylor, the senior US diplomat in Ukraine, questions whether conditions are being attached to US military aid and a White House invitation for Ukraine's president.

Mr Sondland replies that their discussion should be continued over the phone.

Another text shows Mr Taylor saying it would be "crazy" to withhold military aid to Ukraine for Mr Trump's political gain in the 2020 election.

Mr Sondland reportedly sent this last message after a direct call with the president, the Associated Press reported on Tuesday.